Norristown, Pa. February 2013 – Megger, one of the world’s leading manufacturers and suppliers of test equipment and measuring instruments for electrical power applications, hosted its 12th annual Megger Distributor Golf Event on Saturday, January 26. The event, which took place at the Lakes of Ahawatukee Golf Course in Phoenix, Arizona, is held to raise money for the Phoenix Children’s Hospital (PCH) Foundation. 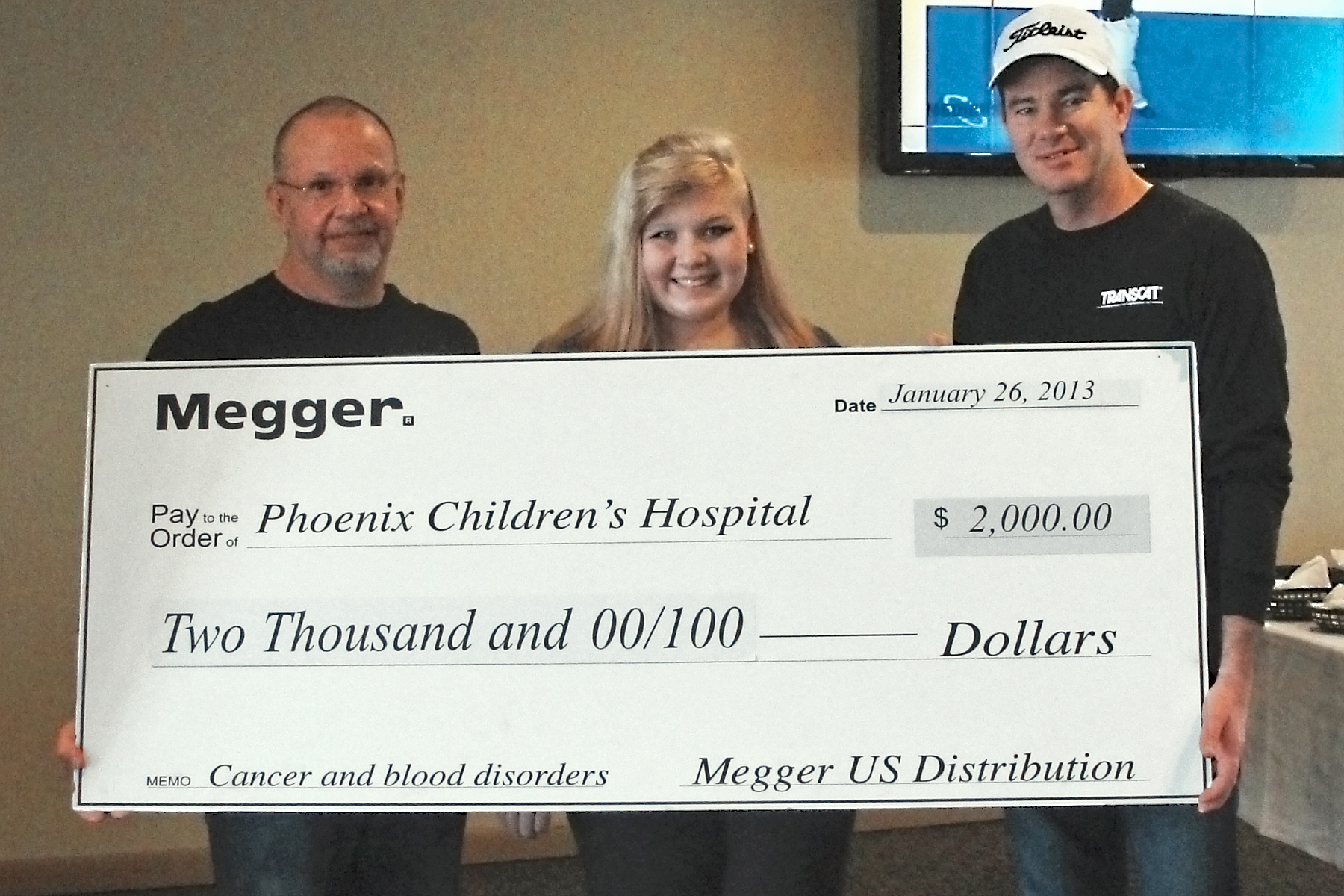 David Danner, national distribution manager for Megger and event co-coordinator said, “We had torrential rain the day of the event. 130 golfers were pre-registered and 104 played that day.  We are truly humbled and amazed by the support we got in light of the weather.  We quickly realized that nothing could dampen the enthusiasm and dedication people have for this worthwhile event.  It was touching.”

Danner’s 16 year old daughter, Tyler, was diagnosed with Rhabdomyosarcoma over five years ago.  She underwent chemotherapy and radiation treatments at PCH and is now cancer-free.  “Donating the proceeds from this special event is the best way we know how to give thanks and give back,” explains Danner.  “Megger makes that possible for me and my family.  It is a wonderful thing.”

The event, which is hosted by the Megger US distribution team, authorized distributors, customers, employees and representatives from Phoenix Children’s Hospital Foundation, raised $3,000 this year.  “In lieu of awarding prizes, Megger donated $2,000 to the hospital this year.  That was $1,000 more than last year.  We were also able to raise $1,000 through the 50/50 Raffle.  Dave Tanguary, Matt Tanguary, Travis Kawaje and Tom Dixion pooled their money together and won the raffle.  They selflessly donated their share of the winnings, helping us to donate three times what was raised last year,” said Danner.  An additional $250 was donated to the Phoenix Girls Choir through the sale of mulligans.

“A 2013 Nissan Ultima from Larry H. Miller Nissan Mesa was up for grabs at the 10th Hole for getting a hole-in-one.  Unfortunately, no one got lucky,” said Danner.

Golfers Dan Kielbasa and David Sweet of IRBY Electrical Distributors won the golf round portion of the event.

Peg Houck, marketing manager for Megger US distribution said, “The overwhelming support and generosity of our customers, employees and vendors is amazing.  We are so appreciative for all that everyone does for this event, from planning to playing.”

Become a fan of Megger: https://www.facebook.com/meggerus