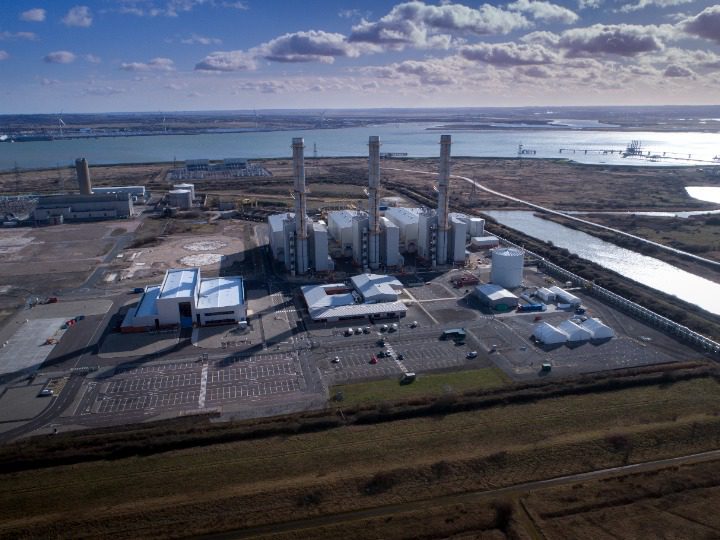 London, UK – March 29, 2022 –GE (NYSE: GE) today announced it has commenced its hydrogen plant readiness assessment of Grain power station in Kent, England, which is the newest combined-cycle gas turbine (CCGT) power station in Uniper’s UK portfolio. Since the signing of their cooperation agreement, Uniper and GE have been collaborating closely on the long-term decarbonisation of Uniper’s gas-fired power plants and natural gas storage facilities.  This could also play a part in helping the UK reach its target of achieving net-zero greenhouse gas emissions by 2050. To support this effort, GE’s plant assessment at Grain will seek to develop detailed solutions to enable the 1,365 megawatts (MW) CCGT plant to use blends of hydrogen up to 40% by volume, which could lower its carbon emissions and help achieve Uniper’s decarbonisation target.

“Investigating lower carbon options for gas turbines could help the power generation industry reduce its carbon emissions over the next decade and blending hydrogen with natural gas to lower carbon emissions is one of the options we’re exploring. Uniper set the strategic goal of carbon-neutrality in its European generation by 2035, and this project marks a tangible step toward the decarbonisation of our gas assets,” said Ian Rogers, Uniper Head of Asset Improvement and Making Net Zero Possible project. “The assessment will provide us with the scope of the upgrade needed to support operation of up to 40% hydrogen by volume, while maintaining both plant economics and reliability.”

This project will define the plant equipment modifications necessary for the existing GT26 gas turbines to accommodate hydrogen fuel blends of significant volumes. Multiple engineering and consulting teams located across GE’s sites worldwide will support the assessment in a cross-functional effort. Hydrogen use forms part of the hybrid decarbonisation strategy being developed for the site.

“GE is continuing to advance our gas power technologies towards near zero-carbon power generation and part of this evolution involves the modernisation of existing combined-cycle power plants through the increasing use of emissions-friendly hydrogen in GE gas turbines,” said Martin O’Neill, VP Strategy, GE Gas Power. “Our collaboration with Uniper in support of their efforts in achieving carbon neutrality across their European generation will also bring us closer to the UK’s net-zero target and help us support the energy transition.”

GE’s gas turbine technology builds on decades of experience and leadership in the use of hydrogen as a gas turbine fuel. More than 100 GE gas turbines have already accumulated greater than 8 million operating hours burning hydrogen and have produced ~530 terawatt hours of electricity.

About GE Gas Power
GE Gas Power is a world leader in natural gas power technology, services, and solutions. Through relentless innovation and continuous partnership with our customers, we are providing more advanced, cleaner and efficient power that people depend on today and building the energy technologies of the future. With the world’s largest installed base of gas turbines and more than 670 million operating hours across GE’s installed fleet, we offer advanced technology and a level of experience that’s unmatched in the industry to build, operate, and maintain leading gas power plants. For more information, please visit www.ge.com/power/gas and follow GE’s gas power businesses on Twitter and LinkedIn.

Uniper in the UK
In the UK, Uniper owns and operates a flexible generation portfolio of seven power stations, a fast-cycle gas storage facility and two high pressure gas pipelines, from Theddlethorpe to Killingholme and from Blyborough to Cottam. We also have significant long-term regasification capacity at the Grain LNG terminal in Kent, to convert LNG back to natural gas.

About Uniper
Uniper is a leading international energy company, has around 11,500 employees, and operates in more than 40 countries. The company plans for its power generation business in Europe to be carbon-neutral by 2035. Uniper’s roughly 33 GW of installed generation capacity make it one of the world‘s largest electricity producers. The company’s core activities include power generation in Europe and Russia as well as global energy trading and a broad gas portfolio, which makes Uniper one of Europe’s leading gas companies. In addition, Uniper is a reliable partner for communities, municipal utilities, and industrial enterprises for planning and implementing innovative, lower-carbon solutions on their decarbonization journey. Uniper is a hydrogen pioneer, is active worldwide along the entire hydrogen value chain, and is conducting projects to make hydrogen a mainstay of the energy supply.

The company is based in Düsseldorf and is currently Germany’s third-largest publicly listed energy supply company. Together with its main shareholder Fortum, Uniper is also Europe’s third-largest producer of zero-carbon energy.