More than 60 floating power stations are in operation around the world, deploying some 4 GW at continental shores where electricity is most needed. Though these feature a variety of power sources (including nuclear, gas, and heavy fuels), most are power barges — they do not have their own propulsion systems and would have to be towed to desired locations.

Some are of extraordinary size or feature novel designs. The largest of these, for example, is a 220-MW unit at Mangalore, in southwest India, according to Waller Marine Inc., the project’s designer. The maritime services provider is also currently carrying out design work on an even larger project, a 520-MW combined-cycle facility that will provide power to New York City. And at the same time, it is working on a modularized floating integrated gasification combined-cycle power plant, which would be fueled by petcoke.

Both of these projects are expected to be set afloat within the next two years. About 450 feet long, OPK’s floating nuclear power station is expected to have a total capacity of 70 MW. It will be located in the north of the Russian Federation, where key energy supplies are lacking, OPK said. The reactors’ thermal energy can be sent up to 180 miles away. The plant’s design lifespan is 40 years, with refueling every two to three years. The project is said to have a 12-year payback.

RWE Power’s power barge will feature a combined-cycle gas turbine power station erected on floating pontoons. When deployed, the 98-foot by 328-foot units would be anchored and connected to the gas or electricity grid, providing electricity to shortage-stricken countries on the eastern Mediterranean and on the Black Sea.

This October, meanwhile, German company MAN Diesel announced a new direction in floating power plants, saying it had signed a contract with Turkish company Karadeniz Powership Co. Ltd. for the supply up to 24 large-bore power-generating diesel engines that would be installed on four "power ships" (Figure 4). The contract, which MAN says is worth over €100 million, includes 21 type-18V51/60DF dual-fuel engines and three 14V48/60 HFO engines, with a total output of 400 MW. 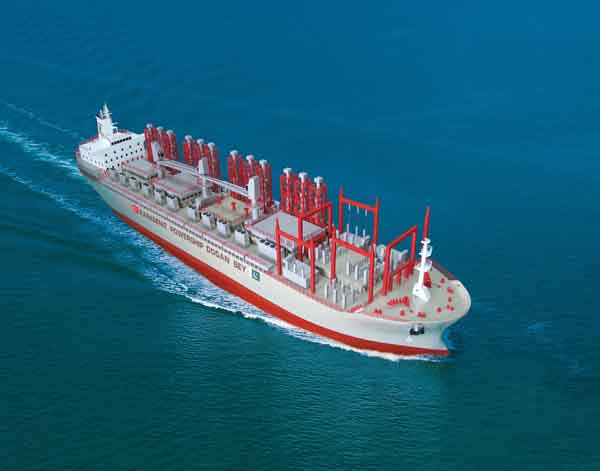 4.    Floating an idea. Turkish company Karadeniz Powership Co. Ltd. plans to convert former freighters into floating diesel power plants using 24 large-bore power-generating diesel engines made by German company MAN Diesel. The ships will reportedly have an output of up to 400 MW, and they will be used to provide electricity to shortage-stricken countries in Africa, the Middle East, and around the Mediterranean. Courtesy: MAN Diesel

The ships are former freighters that will be converted into floating diesel power plants, which will be connected to local power grids to temporarily cover demand whenever onsite power plants are insufficient or new power plants cannot be built quickly enough. Unlike so-called "power barges," the "power ships" will be equipped with their own propulsion engines and therefore will not need to be towed. They are expected to be used in Africa, Pakistan, regions in the Middle East, and around the Mediterranean.

According to Turkish newspaper Zaman, the first of these so-called power ships is already in the works: A 125-MW ship ordered by Iraq’s electricity ministry is in the final phase of construction and will soon be dispatched to the country. The 188-meter-long power ship will be docked in the Umm Qasr port in the Persian Gulf to mainly provide energy for the port. The remaining electricity will be diverted to residential areas in Basra, the newspaper reported in November.