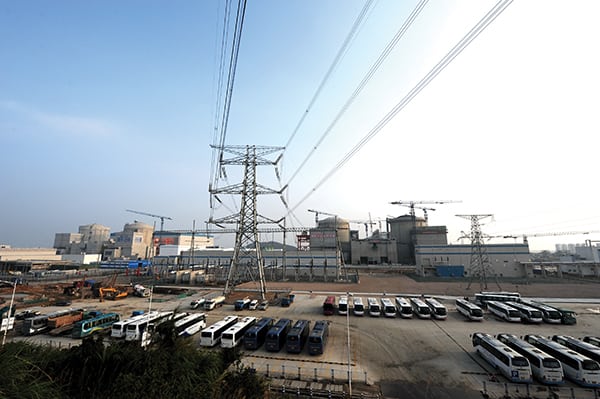 China is on an epic build-out of its nuclear generating capacity, and developing indigenous expertise and technology is central to that goal. The first completed plant leveraging the nation’s CPR-1000 design is a trendsetter showcasing China’s emergence as a nuclear energy leader.

The “nuclear renaissance” may have long since stalled in North America, but it’s going strong in China. According to the International Atomic Energy Agency, of the 60 nuclear reactors under construction worldwide, one-third of them are in China. Those 20 reactors comprise more than 20 GW of potential capacity, which is more than the next four nations combined.

As impressive as that may sound, even bigger plans are in the works. The nation’s nuclear ambitions, formalized in the 13th Five-Year Plan released in March 2016, aim for 58 GW of total capacity by 2020—which would double the current total—and potentially as much as 150 GW by 2030. That would push it well beyond the U.S., the current leader in both installed capacity and number of operating reactors. Getting there, according to the plan, will involve around $100 billion in investment to start construction on a staggering seven reactors annually between now and 2030. 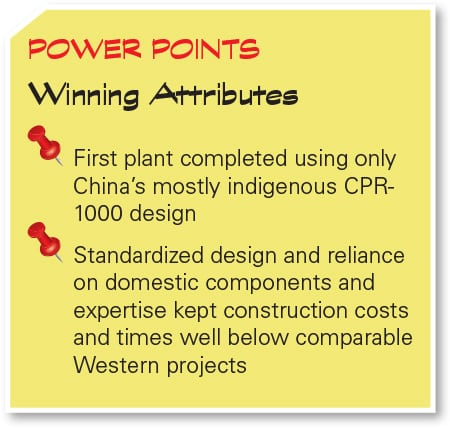 All that nuclear capacity is necessary in part because of the nation’s commitment to reducing its carbon output and the realization that its traditional heavy reliance on coal has resulted in serious environmental consequences. China’s endemic air pollution problems over the past few years are well known (see “China’s War on Air Pollution” in the November 2014 issue); less well known is the degree to which water shortages are challenging the nation’s inland thermal plants. (Most of its nuclear generation is located or planned on or near the eastern coastline and consequently will place much less stress on China’s water resources. New transmission capacity to move that generation inland is also in the works.)

Building that much capacity means that continued reliance on foreign companies and technology could be a risk. To that end, China has worked tirelessly over the past decades to develop and deploy both nuclear expertise and indigenous technology. Whereas reactors completed in the late 2000s relied on foreign-built components and foreign companies for a majority of the projects, the newest reactors are seeing 80% or more of their components manufactured domestically. In particular, China has taken the global lead on the heavy forging capacity that is necessary to manufacture reactor vessels. From zero a few years ago, China now has six such forges—more than any other country—and more are under construction.

Central to its plan to develop indigenous technology has been China’s CPR-1000 reactor, developed by China General Nuclear Power Co. (CGN). The CPR-1000 is a pressurized-water reactor adapted from an AREVA three-loop design. Considered a Gen-II+ design, the CPR-1000 reactor has digital instrumentation and controls and a 60-year design life.

The first CPR-1000 plant, Ling Ao 3 in Guangdong Province, came online in 2010. Since then, 17 CPR-1000 reactors have entered service, making it the most common operational design in China. The first nuclear power plant to be built exclusively using the CPR-1000, and the first to complete a multi-unit phase and enter commercial operations, is the Ningde Nuclear Power Plant in Fujian Province on the eastern coast.

Planning for Ningde began in the early 2000s. The National Development and Reform Commission approved the project in September 2006, with permission to begin construction issued in 2007. Site preparation for Ningde 1 began shortly thereafter, with formal construction beginning in early 2008. Construction starts on Units 2 through 4 followed at roughly one-year intervals: November 2008, January 2010, and September 2010, respectively.

The project was a partnership between CGN and Datang International, with CGN holding a 46% share, Datang holding a 44% share, and Fujian Energy Group holding the remaining 10%. Official cost estimates for the four-unit Phase 1 were¥52 billion ($7.6 billion).

The proportion of domestically manufactured components increased with each new unit. Units 1 and 2 sourced about 75% of their components from China, but by the time Ningde 4 was under way, about 85% of its components were domestic. CGN supplied most of the elements of the nuclear island, with Dongfang Electric supplying the steam turbines and turbine generators, using some Alstom technology under license.

Ningde 1 reached commercial operations in April 2013, with the other three units following in May 2014, March 2015, and July 2016 for Unit 4. Site preparation began in 2007, and the four-unit project was completed in nine years. The plant is built on partially reclaimed land on a peninsula jutting into Qingchuan Bay along the Taiwan Strait. The four units, naturally, rely on ocean cooling.

Since beginning operations, Ningde 2 and 3 have achieved lifetime capacity factors at or above 90%. Ningde 1’s lifetime capacity factor is a bit lower, at 80%, in large part because its generation was curtailed for much of 2014, when it operated at only 58.4% capacity, reportedly because of a power glut in the area. For 2015, Units 1 through 3 collectively operated at 88% capacity and supplied about 16% of the demand in Fujian Province, according to CGN. All four units operated together at 100% power for the first time on August 19 this year, prompting CGN to declare Phase 1 officially complete. Construction was completed without “major personal safety and equipment damage,” CGN said in a Chinese-language announcement in July.

The reliance on standardized domestic manufacturing and less-expensive domestic labor helped keep costs for Ningde low (Figure 1). Official cost estimates for the four-unit Phase 1 were a bit less than $2 billion per reactor. That compares quite favorably with costs for comparable western projects, such as the five reactors under construction in the U.S., where costs are three or four times as much, or the UK, where the slightly larger two-unit Hinkley Point C expansion is projected to cost upwards of $24 billion.

CGN’s ambitions for Ningde do not stop with Unit 4. Two more units are planned for Phase II at the site, though these will use the next-generation Hualong One design. The Hualong One, also known as the HPR-1000, is a Gen-III evolution of the CPR-1000 that was merged with China National Nuclear Corp.’s ACP-1000 design in 2014 to help promote further standardization of advanced nuclear technology in China. Both companies have begun construction of HPR-1000 reactors. CGN said in February 2016 that Ningde Units 5 and 6 are still in the regulatory approval process. It has not yet released details or a construction timeline, though early preparatory work is under way. ■