Power system demands are changing to put a premium on flexible grid operations, and gas-fired power is the best choice for increasing flexibility.

Such was the sense of a panel presentation to utility regulators at the 126th annual meeting of the National Association of Regulatory Utility Commissioners (NARUC) in San Francisco this week.

Panelists touted the flexibility of gas generating technologies and highlighted a regulatory barrier to greater reliability in a gas-solar mix.

Joseph Ferrari of Wärtsilä North America said power systems are getting “peakier.” Air conditioning continues to drive up peak demand, even as average demand declines through energy efficiency and the decline in manufacturing activity. The ratio of peak-to-average load has grown 7% in the last 25 years, he said, and is expected to be another 13% higher by 2025.

Additionally, the growth of solar power is creating the potential for larger ramps as the sun goes down just as late afternoon demand peaks. This phenomenon has become familiar thanks to the California Independent System Operator’s (CAISO’s) well-known “duck chart,” a graphic that made multiple appearances in presentations at NARUC.

Manufacturers eagerly touted the flexibility of their generators as an asset to the increasingly peaky and variable power supply. Amol Modi of GE Water & Power made the case for GE’s LMS100 simple cycle turbines.

Claiming it is the “world’s most efficient simple cycle gas turbine,” with a 10-minute startup and a ramp rate of 50 MW a minute, Modi said the 100-MW unit was designed for renewables integration.

CAISO has 13 LMS100 turbines, which are cycled aggressively up and down during the day, and shut off at night. GE found in a study that use of the LMS100 drove down total costs and enabled more renewables.

But Ferrari talked up the often-overlooked reciprocating engine as a rapid-acting grid generator. While capital costs are about the same as a combustion turbine, a 10- to 20-MW engine is 10% more efficient, he said, with a 5-minute start time and an ability to ramp from 30% to 100% in only 40 seconds.

The big solar ramp is expected to be especially strong in Arizona, which already has 1,900 MW of solar in operation, second only to California. Arizona Public Service (APS) has forecast a typical demand curve for an April day in 2020 with much greater amounts of solar (Figure 1). 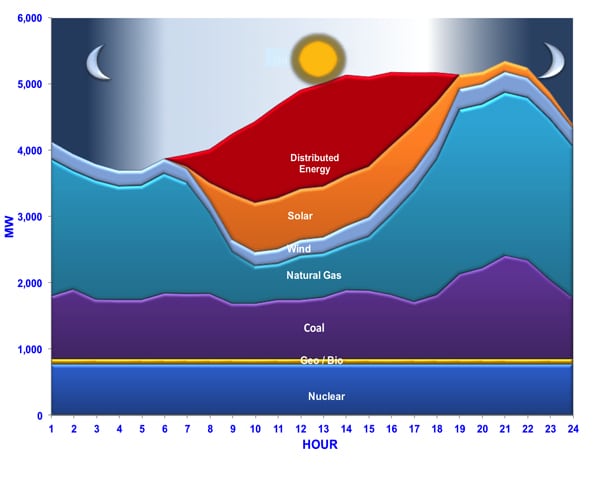 1. Big ramp. Large amounts of distributed solar generation in Arizona are expected to challenge the grid. This chart shows predictions for a day in April 2020. Courtesy: APS

In their analysis, solar grows to nearly half of the mid-day peak, yet power demand stays high into the evening as air conditioners continue to run and lights start to come on. As the sun goes down, 2,500 MW of solar must be replaced by other resources, mostly flexible natural gas.

The afternoon ramp has highlighted a new wrinkle in the relationship between gas and electricity markets. Because the increase happens late in the day, electric generators may not hold adequate gas transmission rights to secure the necessary fuel for generation.

Kelly Daly of Stinson Leonard Street, a D.C. law firm, is working with the Desert Southwest Pipeline Stakeholders, a group made up of the Arizona Corporation Commission, APS and other electric utilities, and UNS Gas.

Under the current pipeline scheduling process, set by the North American Energy Standards Board (NAESB), gas buyers nationwide submit a reservation (called a “nomination”) for the amount of pipeline transportation capacity needed the next day. Electric utilities in the Southwest buy firm rights, though many merchant gas generators in the U.S. don’t—a problem that contributed to reliability issues during the “polar vortex” in PJM last winter.

Generators can make changes in gas demands during the day of delivery by using two intraday cycles, at 10:00 in the morning or 5:00 p.m., both central time.

The catch is that the later cycle is a “no bump” cycle, which means that if an interruptible shipper is already using the firm shipper’s capacity, the firm shipper cannot bump him off and is out of luck.

“If the sun is shining all day, they don’t need the extra gas transportation,” Daly points out. “However, if the sun goes behind a cloud unexpectedly any time after 8:00 a.m. in Phoenix and an interruptible shipper is using the capacity, there is no cycle left for the firm shipper to get access to its capacity.”

FERC issued a proposed rule in March that would change the daily gas pipeline scheduling protocol. FERC points out that, under the current scheduling timelines in the gas and electric industries, gas-fired generators in independent system operator and regional transmission organization markets must purchase and nominate gas before they know whether they will be called upon in the Day-Ahead energy markets. FERC proposed switching to four nomination cycles, starting at 4:00 a.m. central time.

In response, NAESB convened the Gas-Electric Harmonization (GEH) Forum. Stakeholders from the gas and electric industries debated and voted on the proposals, finding little consensus. In the end, NAESB proposed adding a third nomination cycle, and not changing the start time. Gas stakeholders complained about the safety issues of checking gas equipment in the predawn darkness and suggested that electric market schedules be changed to match the gas schedules.

To help with the sunset ramp problem in Arizona, Daly’s Desert Southwest group is asking FERC to create a “late afternoon intraday cycle.” “We need to have gas supplies readily available to respond” to changes in output from renewables, she told the NARUC panel. “Gas is the only viable option because it is quick start.”

Comments on the proposed rule are due on November 28. FERC is not required to make a decision, and has no timeline for the rule.