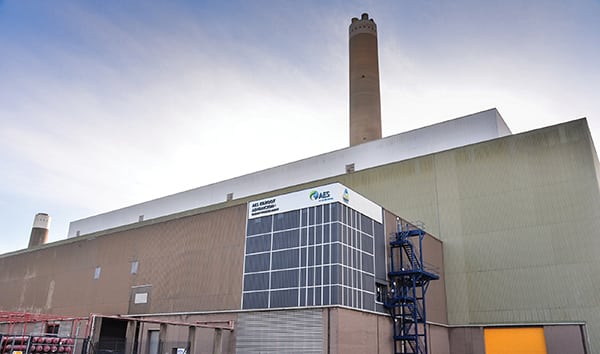 The governments of Ireland and Northern Ireland have big ambitions for their unified electricity market, including a wind-heavy 40% renewable generation target by 2020. Making that happen while delivering safe, reliable electricity to customers across the island means a sea change in how the grid is operated. One of the first big steps is installation of the largest battery storage system in the UK and Ireland.

The history of the electricity market on the island of Ireland in many ways mirrors the history of the island as a whole. Along with greater economic and political integration following the peace process at the end of the 1990s, the System Operator Northern Ireland (SONI) and EirGrid, the state transmission operator for the Republic of Ireland, began work to develop a single integrated wholesale electricity market in 2004. After several years of discussion and planning, the Single Electricity Market (SEM) was launched in November 2007. The SEM is a mandatory pool into which all electricity generated on or imported onto the island must be sold, and from which all wholesale electricity for consumption or export must be purchased. It serves about 2.5 million customers, slightly less than one-third in Northern Island and the remainder in the Republic.

Both Northern Ireland and the Republic of Ireland have aggressive renewable energy targets, seeking to meet 40% of gross electricity demand from renewable energy by 2020. The large majority of this generation (roughly 37% of total demand) will come from wind, leveraging the region’s abundant wind resources. The Republic currently has about 2,400 MW of installed wind capacity, while Northern Ireland has about 600 MW. Both are well on their way toward meeting their targets, with renewables having reached about 20% of the mix in 2015.

In Northern Ireland, the Northern Ireland Renewables Obligation subsidy system has driven high installation rates for both on- and offshore wind, which has in turn driven a need for robust balancing services to integrate such high levels of intermittent generation. Unfortunately, the region’s aging conventional fleet is struggling to keep pace.

Northern Ireland has three major power plants relying on a mix of fossil fuels. Gas-fired Ballylumford in County Antrim is the largest at 1,246 MW. Kilroot, south of Ballylumford in Carrickfergus near Belfast, is the second-largest, with 520 MW of dual-fired coal and oil boilers and 140 MW of gas turbines. The third, the 400-MW Coolkeeragh combined cycle plant, is in the region’s west, near Derry/Londonderry.

The Kilroot station began construction in 1974 as an asset of the state-run utility Northern Ireland Electricity (NIE). Originally intended as a four-unit, 1,200-MW oil-fired plant, it was scaled back to two units in the early 1980s as a result of government budget cuts. Commercial operations began in 1981, with the second unit coming online the following year. When oil prices rose later in the decade, the decision was made to add dual-fuel capability, and the conversion was completed in 1989. Since then, the plant has burned mostly coal.

When NIE was privatized in 1991, it moved to sell all of its power plants. AES Corp. and Belgian firm Tractebel purchased Kilroot in a 50/50 joint venture. Tractebel would later sell its share to AES, leaving AES as the sole owner. (AES would also purchase Ballylumford.)

Over its 35-year history, Kilroot has supported its responsibility as a critical leg of the region’s generation through repeated upgrades in its technology and environmental controls. A flue gas desulfurization system and selective non-catalytic reduction technology were added in the 2000s. A variety of other improvements have helped boost the plant’s heat rate and efficiency. And while the installation of two 42-MW gas turbines in 2009 gave Kilroot additional peaking capacity, the island’s ever-increasing renewable generation meant more than that was needed.

In 2011, EirGrid, SONI, and other stakeholders on the island launched the DS3 initiative: Delivering a Secure, Sustainable Electricity System for Northern Ireland and the Republic. According to EirGrid, “The aim of the DS3 Programme is to meet the challenges of operating the electricity system in a secure manner while achieving the 2020 renewable electricity targets. The DS3 Programme is designed to ensure that we can securely operate the power system with increasing amounts of variable non-synchronous renewable generation over the coming years.”

DS3 has three pillars: Performance, policies, and tools. Energy storage was identified early on as a critical element of system performance.

AES is one of the world leaders in large battery integration, and AES Energy Storage has deployed and operates the world’s largest fleet of grid-connected batteries, with 136 MW in operation and another 258 MW under construction or in late-stage development around the world. AES began exploring possibilities for energy storage in Northern Ireland even before DS3 was formally launched, as the market signals—in particular, growing curtailment payments to the island’s wind farms as a result of the grid’s inability to accept all the electricity they were generating—made storage economically promising.

John Zahurancik, president of AES Energy Storage, explained to POWER, “Northern Ireland is installing a significant amount of renewable energy and is a leader in creating a market-based mechanism that pays resources for their performance and the value they deliver.” That meant a market opportunity for first movers.

In November 2014, AES co-hosted an energy storage seminar in the Northern Ireland Assembly with the All-Party Group on Science and Technology to boost understanding of the different types of energy storage, their applications, and capabilities. Among the speakers was Mike Kormos, executive vice president of operations at PJM, which oversees more grid-connected storage than any other system operator in the U.S. Kormos stressed that electricity storage was becoming an increasingly important tool in grid management.

Kilroot already had a Harmonised Ancillary Services (HAS) contract in place with SONI. AES in late 2014 proposed to install a 10-MW battery storage system at Kilroot using its Advancion 4 technology (which won the Edison Electric Institute’s International Edison Award in June—see “2016 Edison Award Winners Announced” at powermag.com). The proposed Kilroot Array would provide up to 9.9 MW of Primary Operating Reserve, Secondary Operating Reserve and Tertiary Operating Reserve 1 system services at the existing regulated tariff rates under a modified HAS contract.

Because of the impending changes under DS3, AES set ambitious deadlines for installation of the array to ensure that key stakeholders had sufficient time to become familiar with the technology. With DS3 releasing interim tariffs in Q4 2016, AES set a January 1, 2016, target for completion to ensure its partners could gain experience with an operating system as the new market structures were being developed. This meant a mere six months from project kick-off to commercial operation.

The battery array was not simply installed next to the existing plant. Rather, it was built inside it and integrated into the existing infrastructure. The vacant hall built for the never-installed turbine 4 was chosen for the site of the array to allow it to interconnect through the existing distribution boards and transformers of the operational Unit 2 (Figure 1). The presence of asbestos in the area meant that some remediation efforts were necessary.

AES supplied the fourth generation of its Advancion energy storage technology. Batteries were supplied by LG Chem and the inverters by Parker-Hannifin, with construction and balance of plant components by Scotts Electrical Services of Belfast. Construction began on July 1, 2015, with substantial completion in November (Figure 2). Commissioning of the battery system took place from mid-November to mid-December. The project was declared operational on December 21 and was fully grid-connected and available for service on January 5.

During the first few months of operation, AES—working alongside SONI—focused on refining the operator interface and optimizing performance to meet the needs of the SEM. As the Kilroot Array is the first battery storage facility on SONI’s system, it was decided that in order to explore its full potential, Kilroot would adopt a reserve/response profile that was much more aggressive than that of conventional generators. In practice, this means that the battery’s full output is available at a 1% deviation (“droop”) from nominal frequency (which is 50 Hz, so the battery outputs at +/–0.5 Hz), compared to a 4% droop for conventional generation (Figure 3).

When interim DS3 tariffs are phased in (expected in October 2016), the battery will transition to these new arrangements along with other HAS providers on the system. The new ancillary service market under DS3 is designed to properly compensate the advanced performance that the Kilroot Array will be optimizing during the initial period. 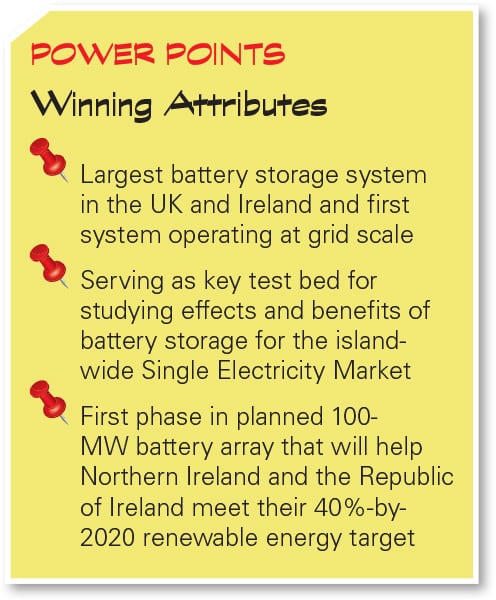 Carla Tully, president of AES UK & Ireland, said of the project’s installation and initial operation, “Northern Ireland needs a secure, affordable and sustainable electricity system for now and in the future. Our investment in the largest battery energy storage array on these islands represents an important advancement for the region.”

The 10 MW in the Kilroot Array, if all goes well, will only be the start. AES has announced plans for a 100-MW storage array at Kilroot—which would be one of the largest in the world—slated for an early 2018 installation. This array is predicted to provide annual savings of£8.5 million ($12.4 million) and avoid 123,000 metric tons of CO2 per year. The proposed expansion will operate in the new Integrated Single Electricity Market, a substantive reform of energy, capacity, and ancillary service markets for the island-wide system that is planned for rollout in October 2017.

Research into how best to use energy storage on the Irish grid is ongoing. Using funding from Innovate UK Energy Catalyst, AES is working with Queen’s University Belfast to study the impact and performance of the Kilroot Array on the Northern Ireland system. AES is also working with Queen’s, SONI, and other stakeholders to open up the market to grid-scale energy storage. AES is running the Array in a variety of test modes, as directed by SONI, to replicate the 14 new service definitions to be introduced in late 2017 and to understand the full potential for energy storage in the system.

Robin McCormick, general manager of SONI, noted, “Integrating battery storage solutions onto the system is an important development which should bring real benefits to customers across the island. As the transmission system operator, this innovation provides a significant learning opportunity. We will assess the role that battery storage will play in the increasingly diverse portfolio of generation sources, as we continue to ensure a safe, secure, reliable and cost efficient electricity supply throughout Northern Ireland.” ■