Pulverized coal has been the dominate fuel used for power generation since the early 1900s.  Perhaps the best reason for its popularity was improved combustion flame stability and heat release rate by a fuel that burns substantially as a gaseous mixture when combusted. This approach to combusting coal has since been extended to all grades of coal, from anthracite to lignite, for steam and power production.  Of course, the balance of the combustion system and furnace geometry must be carefully selected for a given rank and quality.

Thirty years ago, pulverized coal burners were generally very turbulent with combustion efficiency the primary design concern.  During this period, general industry standards for the degree of coal fineness were developed that produced acceptable combustion efficiency.  A sampling of these older standards is presented in Table 1.

Since that time, pulverizer capacity has increased to meet the corresponding growth in unit sizes with incremental improvements in grinding efficiencies.  The pulverizer configuration usually found in most coal-fired power generation plants is the vertical air swept design, although there are a number of ball tube pulverizers still in service.  Both of these styles of pulverizers were, for the most part, placed into service with static classifiers.  Changes in combustion systems implemented in the 1980s with New Source Performance Standards and post-1990 through Title IV of the Clean Air Act (CAA) utilized controlled mixing between pulverized fuels and combustion air and the application of low NOx burners and staged combustion air or overfire air.

One of the challenges facing plants today is to achieve complete combustion during the short time fuel and air particles spend in the combustion zone where they must be exposed to sufficient oxygen and temperature.  Since oxidation rates are also limited by the exposure of the char or carbon in the fuel to oxidizing conditions, this puts increased emphasis on the initial fuel particle size.  Reducing the pulverized coal particle size (in particular, eliminating the coarse particles) increases the surface area to volume or mass ratio, effectively making the coal more reactive.  Consequently, improved fuel fineness will improve plant operating economics as well as reduce air emissions (see sidebar).

A Primer on Coal Fineness

Coal fineness is a relative measurement of particle size distribution typically applied to the product leaving a pulverizer.  Standardized wire mesh screens are stacked and used to shake down samples.  The standard meshes allow particles of a specific size or smaller to pass through, so the largest screen openings are oriented towards the top of a stack.  The weights for each particle size range are then determined and converted to a percentage of total sample weight.

Figure 1 shows the correlation between US standard meshes and the nominal sieve opening. A common practice is to plot the results on a Rosin-Rammler chart.  The Rosin-Rammler equation, shown below, was originally derived in the 1920’s from theoretical considerations.

x = the particle size in mm 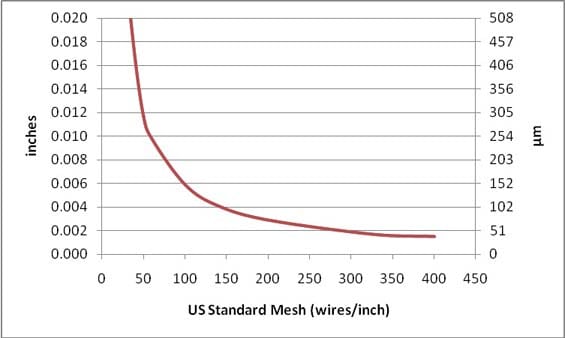 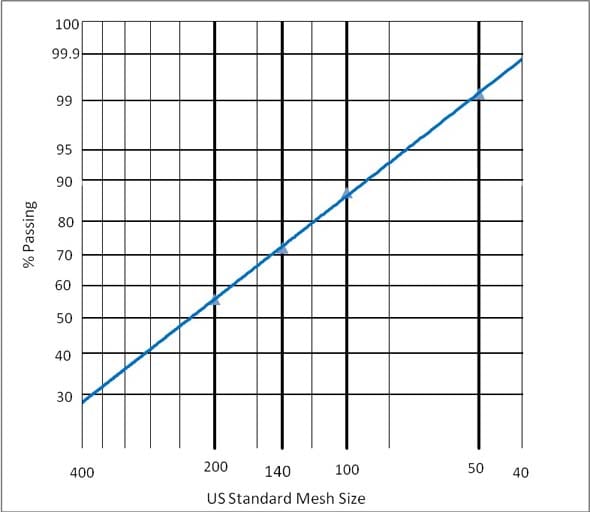 If the pulverizer is functioning properly and the coal sample was properly collected, the Rosin-Rammler plot gives a good straight-line representation of the data. The x-axis uses a log scale with the particle sizes plotted at their square hole U.S. standard mesh equivalent. The y-axis is a probability distribution based on the Rosin-Rammler formula. The slope of this Rosin-Rammler line is “n” in the equation. The absolute size constant “k” represents the most common particle size in the coal particle distribution. The value of “k” is the size at which the line crosses “R” equal to 36.79 (or 63.21% passing).

The coal classification actually begins upstream of the static classifier in Zone A of Figure 3.  In this zone, the drag forces created by the primary air are overcome by gravitational forces for the coarsest particles.  The result is that essentially no coal particles greater than 700 µm in size reach the classifier.  The flow is then turned from vertical to horizontal and radially inward through the classifier vanes (Zone B) where a swirl component is introduced (Zone C).  The intent of the swirl is to add radial inertia to the coal particles to encourage them to migrate outward in Zone D.  Historically, the goal has been to minimize the number of coal particles greater than 300 µm that fail to be classified and are returned to the pulverizer (through Zone E) for further size reduction.  These coarser fractions are considered to be the largest contributors to unburned carbon residues in the fly ash.  Coarse particles also contribute to in-furnace ash deposition and corrosion potentials. 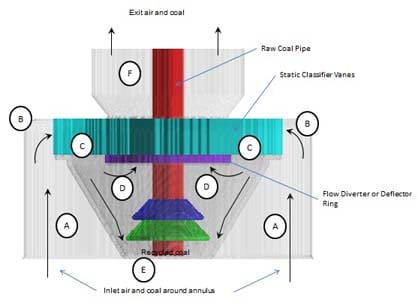 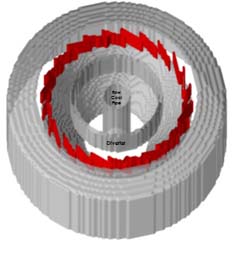 For most static classifier designs in use, there is the ability to increase coal fineness.  This generally involves one or more of the following three adjustments:

Any or all of these adjustments can produce marginal fineness improvements, the magnitude of which is dependent upon the scale of the classifier used and the starting conditions.  However, each also adds pressure drop to the system and the associated increase in draft power required.  This approach can also lead to pulverizer capacity restrictions.  Some changes in the shape and surfaces of the vertically oriented classifier vanes have also been attempted, although with marginal improvement in performance.

During CAA Title VI compliance upgrades there have been some limited applications of dynamic classifiers.  Dynamic classifiers introduce a rotating component with vanes.  Larger particles have more mass and thus higher momentums and inertia than finer particles.  The higher momentum (and inertia) makes it more difficult to avoid components that create a change in direction.  The result is that coarse particles are more likely to be impacted by the rotating components of the dynamic classifier and like a baseball bat impacting the baseball, redirecting their trajectories, ideally back to the grinding zone.  The performance of such retrofit applications was rarely as good as promised, and the installations were relatively expensive and had high maintenance requirements in addition to increasing parasitic power. For external classifier applications applied to ball tube pulverizers, the performance of dynamic classifiers was significantly less effective, presumably due to the lack of proximity to the grinding zone and decreased effectiveness in rejecting coarse particles.

Many of the pulverizers in service today were designed and built prior to the ready availability of computational fluid dynamic (CFD) modeling as a design tool, let alone two-phase CFD modeling.  Over the last couple of years, Reaction Engineering International has been working with LP Amina and SAVvy Engineering to further develop their ability to reasonably simulate particle classification using their proprietary in-house CFD tools.  The objectives for this work were:

The CFD modeling effort focused on a typical MPS pulverizer classifier.  The classifier inlet conditions were based upon actual coal fineness test results from a pulverizer with a plugged classifier reject section.  Figures 5-9, provide a brief comparison of the modeling results for the baseline and new S-Type classifier designs. 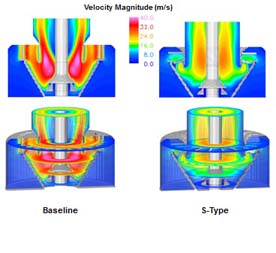 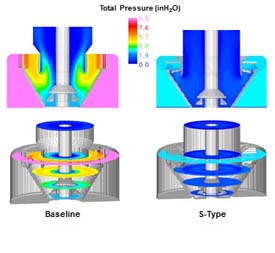 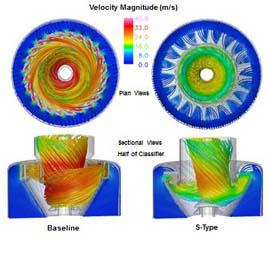 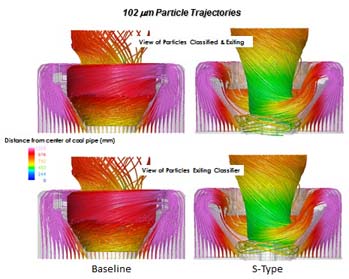 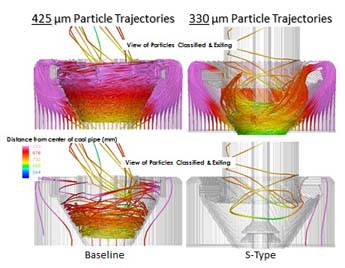 The Rosin-Rammler plots in Figure 10 include the comparative fineness predicted through CFD at the classifier outlet for the Baseline and S-Type classifier designs.  The baseline CFD results reasonably match field measurements for similar operating conditions, and the predicted changes between the two designs (as discussed further below) have essentially been duplicated through a field demonstration.

These plots indicate a substantially improvement in the overall coal fineness results (Figure 11).  Each bar in the two charts presented in the Figure 11 represent the percentage of the particles of a given size range entering the classifier that are either passed through the classifier or rejected back to the pulverizer grinding zone.   Clearly, the S-Type classifier significantly improves the percentage of fine coal particles allowed to pass to the combustion process while passing far less percentage of the two coarser ranges of particles. Also, the S-Type classifier more effectively rejects coarse coal particles back to the grinding zone with very small percentages of fines rejected, relative to the Baseline classifier design. 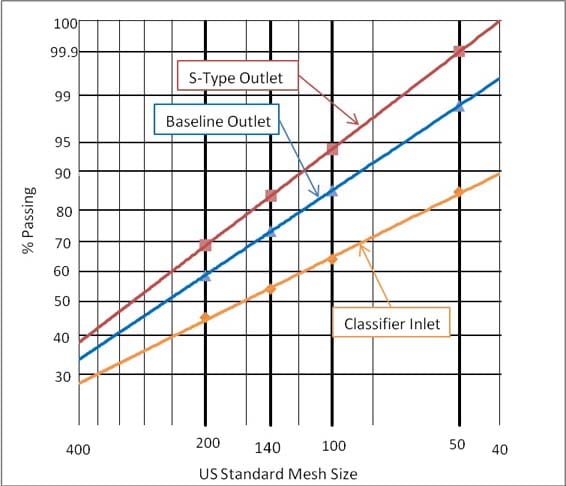 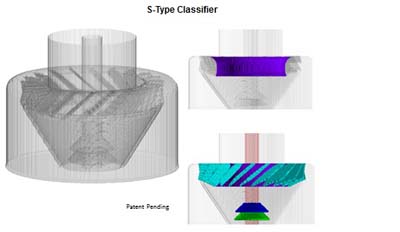 The new design was completed during the summer of 2010 and the first field demonstration was installed in March of 2011 at the Fengtai Power Station, a 600 MWnet unit in Anhui Province, China on one of six MPS-style pulverizers.  The experience to date has closely duplicated the CFD modeling estimates developed by Reaction Engineering International. The significant operational improvements have included:

In addition, reduction in unburned carbon deposition on tube surfaces, reduced slagging potential, and improved combustion side NOx emission control is expected when all pulverizers on a unit use the new classifier. Similarly, low load pulverizer turn-down will improve with the increased fineness and effective reactivity, lowering minimum load without igniter support. The performance data collected during those tests is illustrated in Figures 13–15. 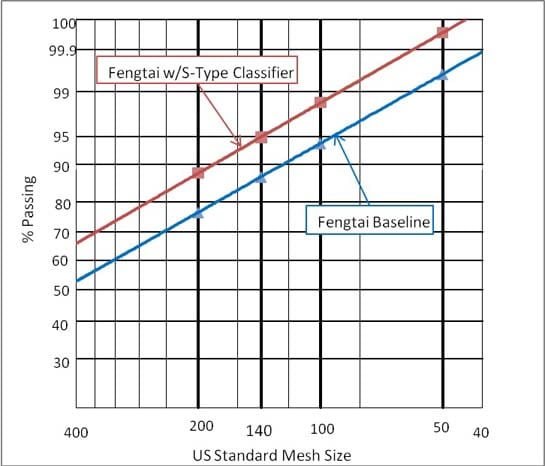 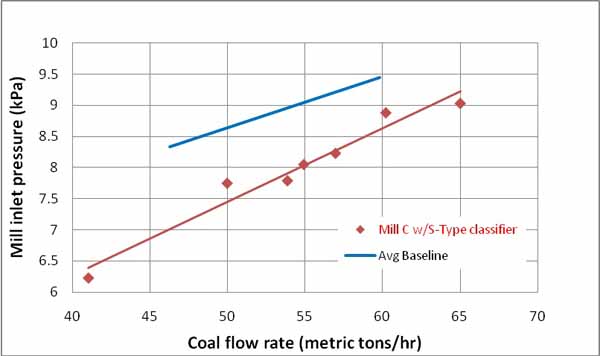 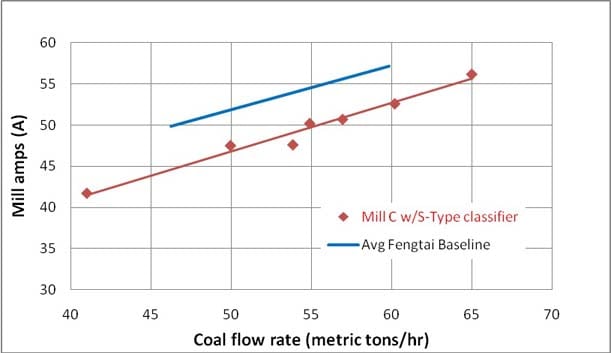 As a result of this success, Fengtai has since issued an order for five more units to retrofit the balance of their pulverizers on the unit.  Similar considerations also apply to the S-Type classifier application on other pulverized coal fired power plants worldwide. The first US S-Type classifier installation is delivered and scheduled to be installed on an MPS-89 pulverizer processing bituminous coals in the September-October 2011 timeframe.

—Scott A. Vierstra, P.E. is the principal of SAVvy Engineering LLC, located in Canal Winchester, Ohio.  SAVvy Engineering provides engineering support to the power industry, focusing heavily on combustion and related auxiliary equipment.  Scott is the inventor of the S-Type classifier (patent pending). Marc Cremer, PhD is the manager of engineering analysis at Reaction Engineering International, located in Salt Lake City, UT.  Reaction Engineering International (www.reaction-eng.com) provides engineering solutions to problems dealing with energy and the environment by leveraging its internal and external specialist talent and computational tools.  David B. Piejak is the general manager for LP Amina’s North American Operations, headquartered in Charlotte, NC.  LP Amina (www.lpamina.com) is a multinational environmental engineering company with research and development activities in the US, Europe and Asia focused on delivering the most advanced environmental technology and solutions to support the sustainable use of coal resources for power, chemistry and other applications.  LP Amina has the exclusive worldwide license to market the S-Type classifier.