Like any internal combustion engine, the power output and efficiency of a combustion turbine decrease as ambient temperatures rise. This loss of power and efficiency is caused by a reduction in ambient air density at higher temperatures. Since turbines are mass flow machines with a volumetrically limited intake, less-dense intake air results in degradation of power output and increase in engine fuel consumption. This is a particular problem for small turbines, which are often used for peaking duty when power demands spike during hot weather.

For these reasons, many such turbines can benefit from some means of inlet air cooling. Inlet cooling increases inlet air density and increases the total heat content of the turbine’s exhaust, further adding to its economic effectiveness.

A number of methods for turbine inlet cooling have been developed, each with its pluses and minuses. Not all methods are appropriate for all applications:

The appropriate method is dependent on operational circumstances. For example, inlet fogging and conventional evaporative methods may be less effective in humid climates, and the greater expense of mechanical chilling may not be justified for smaller turbines.

Conventional methods can also be combined.

In multi-stage indirect/direct evaporative cooling, a method developed by Everest Sciences called ECOCool, air is first cooled by an indirect evaporative process that reduces the primary air dry bulb and wet bulb temperatures prior to entering an air washer, which is a direct evaporative process. This hybrid combination can cool the air several degrees below the ambient wet bulb temperature, which always becomes the limitation for conventional evaporative techniques, and thus ECOCool provides cooler and denser air than conventional evaporative methods. The parasitic power to operate the hybrid cooling system is essentially negligible. This process produces the greatest density and lowest inlet air temperature of any of the evaporative techniques, but it is more expensive. 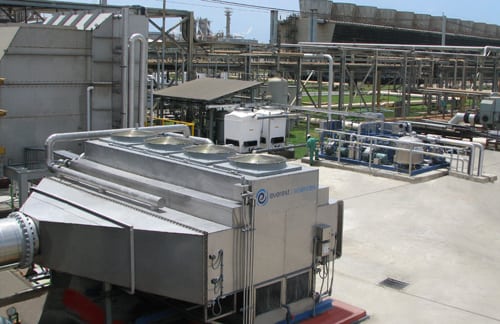 While a hybrid system combining direct evaporative and mechanical chilling might seem attractive as well, such an approach would not be effective because of how mechanical refrigeration works. The power required for refrigeration is a function of the total enthalpy change between a starting temperature and the target temperature. Because direct evaporative techniques do not change the enthalpy of the airstream, there is no benefit in combining the two approaches, as the mechanical refrigeration system will need to work just as hard as it would standing alone.

Because indirect evaporation reduces the enthalpy of the airstream, however, its chilling effect is additive with mechanical refrigeration. This means that adding indirect evaporation will dramatically reduce the refrigeration capacity required to achieve a given target temperature and the amount of work the system must perform to reach the target temperatures. Thus, the parasitic load required to chill the air is also reduced.

Another benefit is inherent in indirect evaporation, which requires a secondary air stream. This high volume source of cooler-than-ambient air can be used for refrigerant condensing, making a separate cooling tower or radiators unnecessary, and further increasing the hybrid system efficiency.

In addition to the listed advantages, the ECOChill system has other benefits. The indirect evaporation system can be operated independently, allowing the mechanical refrigeration system to be shut off when its additional chilling capacity is not needed. This reduces overall parasitic loads as well as wear and tear.

The ECOChill system also has integrated filtration so installation can be a direct drop-in replacement for the filter house. Once set up, the system is fully automatic, maintaining turbine intake air at the target temperatures without the need for operator oversight.

Everest Sciences installed an ECOChill cooling system for a client in the U.S. Southwest. The client employs two small turbines to drive refrigeration compressors for cryogenic distillation of natural gas liquids. The existing direct evaporative system needed replacement and did not provide sufficient cooling and air density increase during many periods of the year (Figure 2). During some conditions, power output could drop more than 20% from rated capacity. 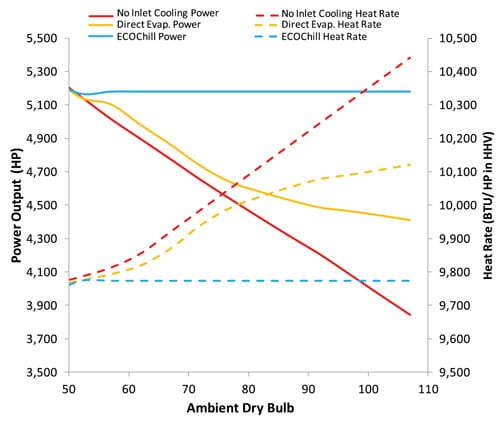 After installation of an ECOChill system, the turbines were able to maintain better-than-rated full power throughout most of the year because the system was able to reduce inlet temperatures to 50F, below ISO/ISA conditions (59F). The client’s estimated yearly return on investment was more than $700,000 from increased power output and reduced operating costs. Most ECOChill installations will see payback periods of less than two years, sometimes considerably less. Everest Sciences has recently commissioned a third unit in this same facility.

Another client operates a natural gas pipeline in the Midwest, where high summer temperatures caused the pipeline compressor driver, a gas turbine, to lose significant power, leading to throughput reductions in gas transportation. Everest Sciences supplied an ECOCool multi-staged indirect evaporative followed by air wash system. Not only does this system provide the client 45F to 50F inlet air temperatures, but its operation also is staged (something not possible with traditional direct evaporative cooling) to provide near–constantly cooled inlet air temperatures throughout the day. The installation provides cool weather–like conditions to the gas turbine all summer long and allows for consistent and steady power delivery to the pipeline compressor.

—Marcus Bastianen, PE is director of sales and marketing with Everest Sciences.