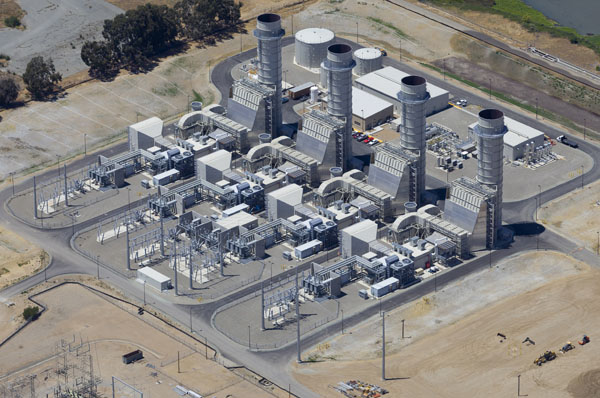 No nukes? No problem.

The state of California, once home to three major nuclear power plants, weathered an early July heat wave in good shape despite having only one operating reactor, Unit 2 at Diablo Canyon Power Plant. Unit 1 at Diablo Canyon was forced to shut down for about a week on June 27 after a minor leak was discovered in the residual heat removal system. The San Onofre Nuclear Generating Station north of San Diego, out of service since early 2012, was officially retired earlier this summer by its owners.

Despite the lost capacity, the California Independent System Operator (CAISO) only needed to ask customers in Northern California to conserve power during the heat wave. Reserve margins remained within safe territory.

The reason is in part the substantial amount of gas-fired capacity that has been added to the CAISO grid in the past few years. The newest plant to come online is NRG’s 720-MW Marsh Landing Generating Station, near Antioch on the Sacramento–San Joaquin River Delta. The four-unit simple cycle plant entered commercial operation on May 1, replacing the 1950s-era Contra Costa Power Plant on the same site. That two-unit steam plant was shut down in part because of its reliance on once-through cooling. The new plant will require only a tiny fraction of the old plant’s water consumption while generating more electricity.

The Marsh Landing plant supplies all its power to Pacific Gas & Electric under a 10-year power purchase agreement. The fast-start facility was specifically designed to compensate for the large amount of wind generation in the area, much of it from nearby Altamont Pass.

In addition to the emissions controls, builder Kiewit followed Leadership in Energy and Environmental Design (LEED) building standards in constructing the facility.

“Siemens’ state of the art fast-start technology and emissions controls demonstrated that we can meet California’s aggressive environmental goals and clean air standards,” said John Chillemi, president of NRG’s West Region in a statement. “The fast-start technology employed by Marsh Landing also supports the integration of new renewable energy sources that are expected to come online over the next decade.”

The project has seen some ups and downs since first being proposed. It was begun by Mirant in 2010 before its merger with RRI Energy to form GenOn. GenOn itself merged with NRG last fall as construction was wrapping up. Despite the corporate musical chairs going on off-site, the project was completed on schedule at a total cost of around $700 million.

“Our goal was to bring this facility online before the California summer peak arrived,” Chillemi said, “and we were able to make it happen.”

While much of the Bay Area, especially around San Francisco, has been markedly hostile to new fossil fuel–fired power plants, cities in the East Bay, such as Antioch, have thrown out the welcome mats in hopes of attracting jobs and tax dollars. San Francisco shuttered its last fossil plant in 2010, but Contra Costa County across the bay has opened four new plants since 1996, with several others in development. The relatively small area contributes about 7.5% of the state’s power. While local environmentalists have lamented the warm reception the plants have gotten, supporters have pointed out that most of them are replacing dirtier and less-efficient generation.