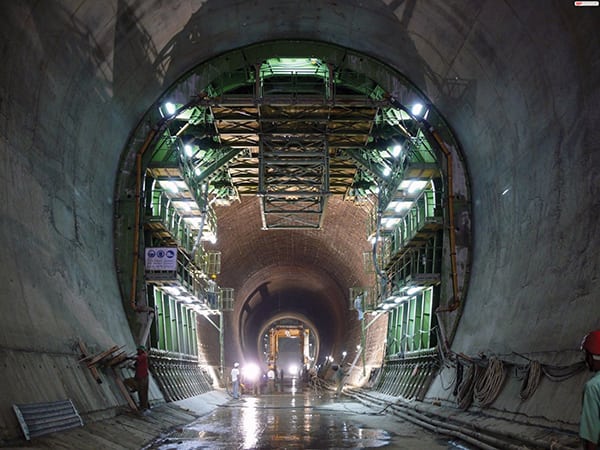 Building the 1,870-MW Gibe III hydroelectric project required unprecedented solutions that took into account the remoteness of the site, the narrow gorge where the dam is located, the height of the dam, and challenges in sourcing reliable materials.

Split almost diagonally by the East African Rift System, Ethiopia is a rugged geological wonderland of mountain ranges and basins. Etched with large river gorges, and with a rainy season that lasts three to four months, the country has an overall hydroelectric potential estimated at around 160 TWh/year.

Although the landlocked country only has about 2.3 GW of installed capacity (86% of which is hydropower) to serve its population of more than 95 million, the government of Ethiopia is on a drive to exploit this massive potential. Under its latest Growth and Transformation plan, the country wants to increase capacity to 10 GW by 2018, to 17 GW by 2020, and to 35 GW by 2037 to sustain soaring economic growth and make Ethiopia a renewable power hub in East Africa.

Among key projects is the 1.8-GW Gibe III (also known as Gilgel Gibe III) in Ethiopia’s southwestern Southern Nations Nationalities and Peoples’ Region. The project is located on the Omo River, a 760-kilometer (km)-long perennial body of water that rises in the Shewan highlands and snakes southward until finally emptying into Lake Turkana on the border with Kenya. Long considered a hydro powerhouse, Ethiopia started construction on the first dam on the Omo River—Gilgel Gibe I—in 1986. The 184-MW rock-filled embankment dam wasn’t completed until 2004, but it spurred the start of construction for the 420-MW Gibe II in 2005. That project, which has a 50-meter (m)-high gravity dam and Pelton turbines, was completed in 2010 with the technical backing of Italian construction and civil engineering firm Salini Impregilo.

Kicking off the Third Phase

In 2006, while construction for Gibe II was ongoing, Ethiopian Electric Power (EEP), a government-owned enterprise that is the sole provider of most of Ethiopia’s bulk power, awarded Salini Impregilo an engineering, construction, and procurement contract for the third project on the Gibe-Omo hydroelectric cascade, Gibe III. Studio Pietrangeli, another Italian firm that provides specialized consulting engineering services for hydropower, designed the innovative project that would become the biggest engineering structure in the history of Ethiopia and provided a feasibility study and technical supervision during construction. French company Tractebel Engineering provided project management services, including review of the feasibility study and basic design, supervision of design and construction, and development and implementation of the environmental management plan.

The companies eventually selected a dam type based on the site’s unique conditions. The project is sited 150 km downstream from Gibe II in an area where the Omo River flows through narrow valleys and deep canyons (Figure 1). This was favorable to construction of a reservoir with a capacity of 14 cubic km (designed to enable flood regulation), but it presented “extremely challenging logistical conditions for dam construction,” said Salini Impregilo. While concrete arch and concrete-faced rockfill were considered, the final design called for a 240-m-high roller compacted concrete (RCC) gravity dam—one of the tallest in the world—and a open-air powerhouse located on the left bank of the river, about 500 m downstream of the dam axis, housing 10 Francis turbine units with a total installed capacity of 1,870 MW. Other key characteristics of the project included:

■ A river diversion system, designed to discharge up to 5,200 cubic meters per second (m3/s), including a 50-m-high rockfill cofferdam and three tunnels of about a kilometer long, with diameters from 7 m to 14 m.

■ A gated spillway on the central portion of the dam crest designed to safely discharge up to 18,000 m3/s through seven radial gates measuring 12 m x 17.5 m.

■ Two middle outlets (see the photo at the top of the story) embedded in the dam body to allow the control of reservoir levels and the discharge of ecological flows.

According to Salini Impregilo, the project shattered several engineering records: “Gibe III is an example of engineering excellence,” it said. “For example, between December 11 and 12, 2014, it reached a world record for pouring RCC at the fastest rate—18,519 cubic meters in 24 hours. It then set a second record in terms of volume in June 2015 with 6 million cubic meters of RCC.” 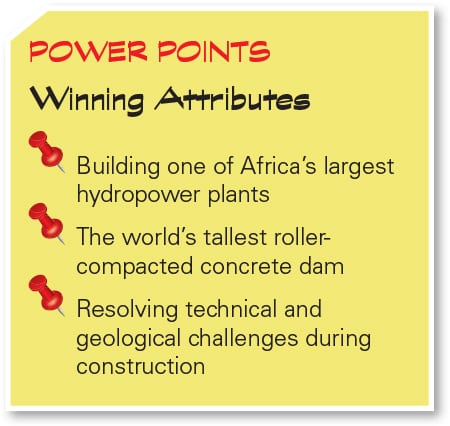 But construction of the project also proved rife with challenges, all of which were overcome with innovative solutions. When it was discovered that some foundation areas had intensely fractured or weathered rock, and there were hot springs at riverbed elevation, the team was forced to excavate deeper, use dental concrete and extensive consolidation grouting along the main sheared and weathered bands, and intercept and monitor spring water inflows, among a number of other measures. Unfavorable rock conditions also forced workers to shift the portal location of the twin headrace tunnels 500 m upstream.

Meanwhile, early in the project, crews discovered that locally sourced Ethiopian cements were unsuitable because of variability in quality and intermittent supply, leading the government to step in to open up the importation of special high-quality cement. The narrow gorge and height of the dam also required special solutions to ensure reliable and efficient placement of the RCC mixes in the various zones of the dam. “Negotiating a drop in elevation of 250 m between the production plants and the dam foundation levels required unprecedented solutions,” EEP said. “Representing a unique case at world level, 17 conveyor belts, for a total length of 960 m and placed at a 22 [degree] inclination, were necessary to reach the lower elevations of the dam.” The companies noted that the placing capacity of compacted RCC was up to 820 m3/hr, “which is a world record.”

Also challenging was the remoteness of the site, which eventually required construction of an airport, a 120-m span bridge, 75 km of new national roads, and 40 km of project site roads. Salini Impregilo noted that Gibe III had a massive workforce with an average 5,000 people (and, at one point, a total of 7,500). This required providing amenities, including camps, sanitation, health, and recreation facilities.

The companies also noted financial hurdles, including the revision of the project’s financial architecture after a major subcontractor was introduced. “This entailed design harmonization and coordination of site activities in an integrated program of works,” said EEP.

A Plant of Major Significance

Completion of Gibe III has been a significant achievement for Ethiopia. Although it will nearly double the country’s generating capacity when all 10 turbines are operating next year (the project began generating power at the end of 2015 and currently feeds the grid with 800 MW), it already has provided an impetus for the country’s ambitious hydropower expansion plans. The government is now funding development of the 6-GW Grand Ethiopian Renaissance Dam. Ethiopia is also on track to commission the 254-MW Genale Dawa III and 385-MW Geba I and II hydroelectric complexes by 2018. Development is poised to begin at the 2-GW Gibe IV and 600-MW Gibe V, as well as at the 326-MW Upper Dabus and 436-MW Halele Warebesa projects.

For EEP and the companies that built Gibe III, this facility stands as a showcase of how large, multi-party projects can be managed and taken from inception to operation within nine years, despite financial, geological, and technical hurdles. This power plant testifies to the fact that technical flexibility with “a spirit of partnership, along with the willingness to deliver,” are the keys to responding to the changing conditions, which are inevitably associated with large hydropower schemes, EEP said. ■