Confronted with a district court ultimatum that would have forced it to install expensive pollution controls or close two coal-fired units at its R.E. Burger Plant in Shadyside, Ohio, Akron-based FirstEnergy Corp. announced in April that it would convert them to biomass. When the $200 million retrofit is complete, as is expected by 2013, the Burger Plant will likely be one of the largest biomass facilities in the U.S.

Under the terms of a consent decree related to the company’s 2005 New Source Review settlement, the district court had required FirstEnergy to make a decision by March 31 either to install scrubbers and other environmental equipment for its Burger Units 4 and 5, repower the units, or commit to shutting them down in the next two years. The settlement between FirstEnergy, the Environmental Protection Agency, and three northeastern states — Connecticut, New Jersey, and New York — was the second-largest federal settlement with a utiliy over air polution.

CEO Anthony J. Alexander noted that the decision was in tune with an alternative energy portfolio standard contained in Ohio law. Though 86% of the state’s power is currently produced from coal, the state law requires that 25% of electricity sold by Ohio’s electric distribution utilities or electric services companies be generated from alternative energy sources by 2025. At least half of this power must come from renewable energy sources, with a minimum of 0.5% coming from solar resources. One-half of the renewable energy facilities must be located in Ohio.

The Burger Plant, which employs 102 people, first came online in 1944; additional units were completed in the 1950s. Units 4 and 5 today provide a combined 312 MW of load-following power. A peaking unit rated at 94 MW remains in operation at the plant, but the company has not specified whether it will continue operating that unit (Figure 1). 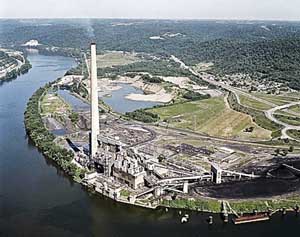 1.    The coal burn. In  April, FirstEnergy Corp., owner and operator of the coal-fired R.E. Burger power plant, decided to retrofit Units 4 and 5 to combust biomass. The decision signals the start of a trend for coal-fired plants in the U.S. Courtesy: FirstEnergy Corp.

The company expects that the units would use a closed-loop system, burning biomass derived from an energy crop — corn stalks, wheat, or grass — grown specifically for use as a fuel source to produce 312 MW (the units’ current capacity). FirstEnergy will conduct test burns of varying amounts of the biomass fuel leading up to the conversion.