Ethiopia, the landlocked nation in East Africa from which key tributaries to the Nile River originate, completed construction of the continent’s highest dam, the 188-meter Tekezé Arch Dam (Figure 3) in February. Located in the Northern Tigre region of Ethiopia on the Tekezé River — which has carved one of the world’s deepest canyons — the dam eclipses the previous record height of 185 m for an African dam, held by the Katse Arch Dam in Lesotho. 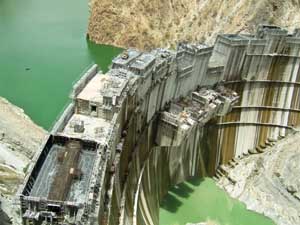 3.     Dammed if you do. In February, the Ethiopian Electric Power Corp. (EEPCo) completed construction of Africa’s highest concrete arch dam on the Tekezé River, a Nile tributary that flows through one of the deepest canyons in the world. The 188-m Tekezé Arch Dam is part of a $365 million hydropower project that will add 300 MW to Ethiopia’s grid. The nation is reportedly suffering chronic power shortages. The government plans to meet future needs with the construction of several mega-dams within the next 10 years, hoping to put three—including the Tekezé hydropower project—online by 2010. Courtesy: EEPCo

The dam is part of the Ethiopian government – funded $365 million Tekezé hydroelectric power project that is being built by state-owned Ethiopian Electric Power Corp. (EEPCo) and the Chinese National Water Resources and Hydropower Engineering Corp. It entails, along with construction of the arch dam, construction of two river diversion tunnels, power waterways, an underground powerhouse containing four 75-MW Francis turbines, a 230-kV substation, and a 105-km transmission line to connect the project to the national grid at Mekele. The project is expected to begin generating 300 MW from the start of the East African monsoon season this July, bringing Ethiopia’s total generating capacity to 1,170 MW.

The Tekezé dam has been dubbed the "Three Gorges of Africa," but it is 10 m taller than the Chinese dam — and much more controversial. Nonprofit group International Rivers says that not only will it cause many of the same environmental problems associated with the Three Gorges and other large dams, but the depth of the canyon in which the dam lies will also likely contribute to major sedimentation at the dam site once the region is flooded. Since the start of construction in 2002, a massive landslide has already occurred near the dam site in April 2008, forcing developers to spend an additional $42 million on retaining walls to keep slopes from eroding.

Ethiopians, meanwhile, have voiced frustration at their government’s determination to construct 10 hydro power plants worth more than $13 billion within the next 10 years. The country’s media say the nation is suffering a chronic power deficit of up to 120 MW that is putting a 1% dent in its gross domestic product. The government reasons that hydroelectric potential in Ethiopia — a mountainous country, but one that is also periodically stricken by severe drought — is estimated to exceed 40,000 MW. Hurrying to alleviate shortages and possibly supply power to the rest of power-starved East Africa, it plans to complete (along with the 300-MW Tekezé project) the 420-MW Gilgel-Gibe II project and the unique 460-MW Beles project, which taps water from Lake Tana, by 2010.