The Environmental Protection Agency (EPA) has announced that is it well on its way to regulating at least 85% of the energy used in America in the name of global warming (never mind the fact that temperatures have inexplicably not increased since at least 2001). If the proposal is enacted, any organization or person that emits more than miniscule amounts of CO2 will be required to obtain a permit, effectively bringing our economy to its knees in short order.

The problems created by regulating greenhouse gases with the Clean Air Act (CAA) are legion. The EPA administrator himself explains how extensive these regulations would be: “If EPA were to regulate greenhouse gas emissions from motor vehicles under the CAA, then regulation of smaller stationary sources that also emit GHGs—such as apartment buildings, large homes, schools, and hospitals—could also be triggered. One point is clear: the potential regulation of greenhouse gases (PDF) under any portion of the CAA could result in an unprecedented expansion of EPA authority that would have a profound effect on virtually every sector of the economy and touch every household in the land.”

Administrator Johnson is correct. Eighty-five percent of the energy used in America comes from fossil fuels. Carbon dioxide emissions are an unavoidable by-product of the combustion of fossil fuels. EPA staff is seeking to regulate the most widespread sources of energy in the U.S.

To understand the scope of the EPA’s potential regulations, Figure 1 illustrates the sources of greenhouse gas emissions in the United States. To reduce greenhouse gas emissions, the EPA’s regulations will affect all of these sectors, industry, transportation, commercial, residential, and agriculture, by raising the price of energy and thereby increase the cost of doing business. 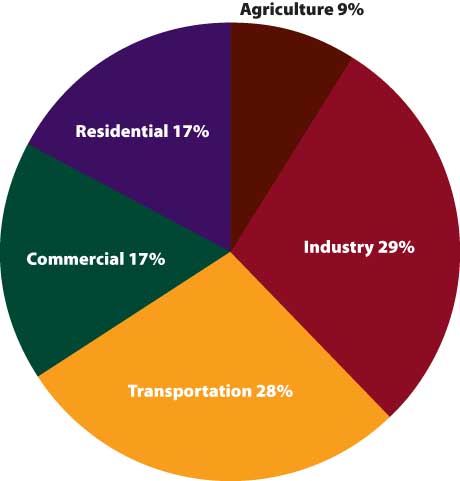 The Clean Air Act was passed in 1970, so it might seem a bit strange that in 2007 the Supreme Court discovered for the first time that the CAA allowed the EPA to regulate greenhouse gases. It is a curious result. To reach it, the Supreme Court had to use some tortured logic. Section 202 of the CAA requires the EPA to regulate “any air pollutant . . . which may reasonably be anticipated to endanger public health or welfare.” The question is, what is the definition of an “air pollutant” under the CAA? The majority decided that an air pollutant was any “airborne compound of whatever stripe.” They even went so far to say that the CAA was unambiguous on this point. Sadly, they are unambiguously wrong.

The CAA defines a pollutant as “any air pollution agent or combination of such agents, including any physical, chemical, . . . substance or matter which is emitted into or otherwise enters the ambient air.” For something to be a pollutant, it must be an “air pollution agent.” Not merely anything in the air.

Carbon dioxide sure doesn’t sound like an “air pollution agent.” It is inert, colorless, odorless, and it isn’t toxic to human at 20 times ambient levels. Justice Scalia in his dissent explained how flawed the majority’s misconstruction of this term was. He wrote from the majority’s opinion “it follows that everything airborne, from Frisbees to flatulence, qualifies as an ‘air pollutant.’ This reading of the statute defies common sense.” But regardless of Massachusetts v. EPA defying common sense, it is the law.

In the past the EPA has essentially stated that greenhouse gases are harmful to human health and welfare. This makes it difficult for the EPA to easily provide a “reasonable explanation” for why it is declining to regulate greenhouse gases. The Supreme Court also made it somewhat difficult for the EPA to avoid regulating greenhouse gas emissions. For example, the court wrote: “Under the clear terms of the CAA, EPA can avoid taking further action only if it determines that greenhouse gases do not contribute to climate change or if it provides some reasonable explanation as to why it cannot or will not exercise its discretion to determine whether they do.”

The Advance Notice of Proposed Rulemaking

Instead of taking the difficult path of explaining the latest climate science and data and refusing to regulate greenhouse gases, the EPA instead is attempting to expand its regulatory reach. In late 2007, the EPA announced that it was going to find that greenhouse gases endangered public health and welfare and that they should therefore be regulated under the CAA. Before this rule came out, however, other administration officials questioned the wisdom of such a move. Because of the complexity of potentially regulating 85% of all energy use in America, the EPA decided that instead of rushing ahead with regulation, it would ask the American public for comments on how to proceed. To do this, it put out an “Advance Notice of Proposed Rulemaking” (ANPR).

In many cases, an ANPR is a small document that asks the public for comment without revealing an agency’s policy preferences. But instead of a small request for comment, the EPA released an enormous 588-page ANPR that lays out the possible ways to regulate greenhouse gases using the CAA. The worst part of the ANPR is that EPA staff have essentially predetermined their course of action—regulating greenhouse gases.

What Will the ANPR Lead To?

Envision massive amounts of regulation on all forms of greenhouse gas emissions. The Massachusetts v. EPA case dealt with the regulation of mobile sources, and the EPA will likely start by regulating anything that has an engine, such as automobiles, light-duty trucks, heavy-duty trucks, motorcycles, planes, ships, boats, recreational vehicles, farm tractors, construction equipment, garden equipment, and even lawn mowers, just to name a few.

And what will these potential regulations look like? The EPA is proposing to require a 10% reduction in the output of America’s energy-intensive industries, lowering the speed limit back to 55 mph, and requiring oceangoing vehicles to take 10% longer to deliver their cargo.

The EPA’s regulation will not be limited to mobile sources. By starting to regulate greenhouse gases under one section of the CAA, the EPA would be forced to regulate it under other sections, including a program called Prevention of Significant Deterioration. This program regulates sources that emit 100 tons or more of emissions a year. This may sounds like a lot, but a 100,000-square-foot building (more or less 10 stories) would emit that much in a year. This means that the EPA would regulate the energy use of all large buildings, and any buildings—such as computer data centers—that use large amounts of energy. There are likely 1 million new sources that the agency would have to regulate and require the buildings to use “best available control technology”—whatever the EPA decides that is for the buildings.

These regulation could extend to the heating sources of large single-family homes, as well as to stores, churches, hospitals, and police stations.

The EPA would also likely regulate all large beef or dairy operations in the country because cows emit (to put it delicately) large amounts of the potent greenhouse gas methane [Ed: mostly through their mouths]. Who knows how the EPA will propose to control these emissions.

EPA Regulation of GHGs Will Lead to Higher Energy Prices

To reduce the greenhouse gas emissions from 85% of the energy used in the U.S. would require great amounts of regulation. The form of these regulations is unclear, but what is clear is that the regulations would dramatically increase energy prices and the price of everything that uses that energy, such as computers, cars, trucks, washing machines, lawnmowers, and air-conditioning units. The economy is already suffering from high energy prices, and the EPA’s plan will just make that worse.

EPA Regulation of GHGs Will Not Affect the Climate

Maybe the most amazing thing about the EPA plan is that it won’t affect the global temperature unless the developing world reduces its greenhouse gas emissions. Because of high energy prices, America’s greenhouse gas emissions have actually fallen for the past few years. World emissions continue to increase, however, because the developing world is more concerned about the health and welfare of its citizens than greenhouse gas emissions. For example, India recent released its National Climate Action Plan on Climate Change. The plan stated, “It is obvious that India needs to substantially increase its per capita energy consumption to provide a minimally acceptable level of well being to its people.”

India and other developing nations are not going to limit their energy consumption to pacify the EPA. Because they won’t, the EPA’s regulation of energy use will only drive up energy prices in America without having any effect on global temperatures.

—Daniel Simmons (dsimmons@ierdc.org) is state policy director for the Institute for Energy Research. This article was originally published  (under a different title) on the IER web site and is used with permission.