Selective catalytic reduction (SCR) systems were introduced as a means of reducing the nitrogen oxide emissions of power generators in the 1980s. Since then, environmental issues have increased in importance, as has the value of an SCR reactor (Figure 1). Unfortunately, because this technology is still so new, not all users understand its full potential and proper maintenance techniques. 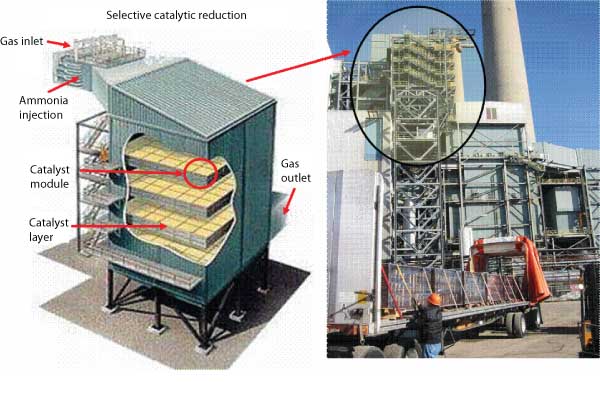 It is inevitable that SCR catalyst performance will reach a point at which the NOx reduction required will not be met and the catalyst will be rendered deactivated. At that point, the decision of how to handle the deactivated catalyst is one with significant monetary and environmental implications. When that point is reached, the three available handling options—regeneration, sale, and disposal—must all be evaluated.

One way to reduce environmental concerns is to extend the life of the catalyst through regeneration. Regeneration gives a power generator the option to reuse the same catalyst multiple times while maintaining, or even improving, its NOx-reduction performance. Regenerating catalysts also minimizes the landfill disposal space required and avoids replacement costs. For a typical 500-MW coal-fired power plant, regeneration of one layer of catalyst would cost approximately $1,000,000—still significantly less than replacement costs.

However, as practical and economical as regeneration may be, some environmental concerns must be factored into the decision.

As the SCR catalysts spend time in the reactor, there are numerous blinding poisons that slowly decrease the catalyst’s performance over time that will eventually deactivate the catalyst. The most common catalyst poison encountered when burning domestic coal is arsenic with calcium; phosphorus is a close second. The initial steps of the regeneration process involve the removal of these toxic chemicals by processing the catalysts through various chemical baths in which the poisons are soluble. This treatment process does an excellent job of removing the desired poisons (Figure 2) but produces wastewater with very high arsenic concentrations. 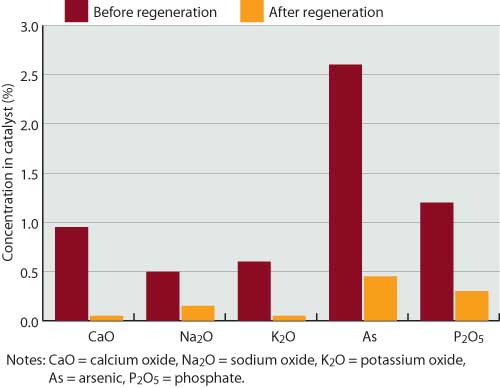 Of course the concentration of arsenic in the catalyst can differ widely from one plant to another or even from one reactor to another, but the arsenic must be removed from the catalyst to a certain level or the desired catalytic activity will not be achieved. The wastewater produced by regeneration has high enough arsenic concentrations that treatment is absolutely necessary before discharge.

A treatment used by SCR-Tech involves a chemical reaction that precipitates out heavy metals, but the treatment is aimed at removing arsenic. This treated solution is then filtered, and the resulting filtrate is discharged to a wastewater treatment plant for further biological treatment. Over 99% of the arsenic in the wastewater is removed during the heavy metals treatment at SCR-Tech. The solids that are filtered are then tested by TCLP (toxicity characteristic leaching procedure), and results typically show 30% of the arsenic limit or less. Recent testing on the wastewater treatment process has shown a decrease in the amount of solids produced, as expected; the filter cake generated is currently less than 100 tons per layer regenerated and is disposed of at a landfill as nonhazardous waste.

Unfortunately, there are situations in which regeneration is impractical. Once the catalyst nears deactivation, management may decide that a given catalyst is not the right “fit” for that particular plant. In such cases, assuming that a catalyst is in good structural condition, selling the original catalyst and replacing it with another is the way to go.

There are different types of SCR catalyst, including plate, honeycomb, and corrugated. As this technology improves, pitch sizes, potentials, and other catalyst properties are continuing to change. Even though any given catalyst may not be right for one plant, it may be perfect for another.

Depending on many factors (such as pitch and condition), the value of the catalyst may be as low as its shipping cost, but selling it still relieves the plant of the cost of landfill disposal. A much more important economic consideration is the cost of new catalyst: A typical 500-MW coal-fired power plant will spend approximately $2,000,000 for a single layer of new catalyst.

Disposing of an SCR Catalyst

Deactivated catalysts are not hazardous and are usually disposed of in a standard landfill, even those found on power plant sites. Though doing so is rare, some catalyst manufacturers have been known to include catalyst disposal in the sales contract. However, disposal does raise some environmental concerns and is typically only done when absolutely necessary. It also may require some local regulator approvals because the sheet volume—up to 350 tons of the material—is substantial.

Every plant’s goal is to have a proactive SCR management program focused on extending the life of the catalyst and minimizing landfill disposal of spent catalysts. Figure 3 shows a 10-year outlook with and without catalyst regeneration to convey a sense of the long-term economic and environmental impacts. Over a 10-year period as much as 815,753 ft3 of catalyst would have to be disposed of if proper SCR management were lacking. Unfortunately, catalyst replacement costs aren’t the only consideration; disposal costs for spent catalyst could run as high as $50,000 to $200,000 per layer (Figure 4). 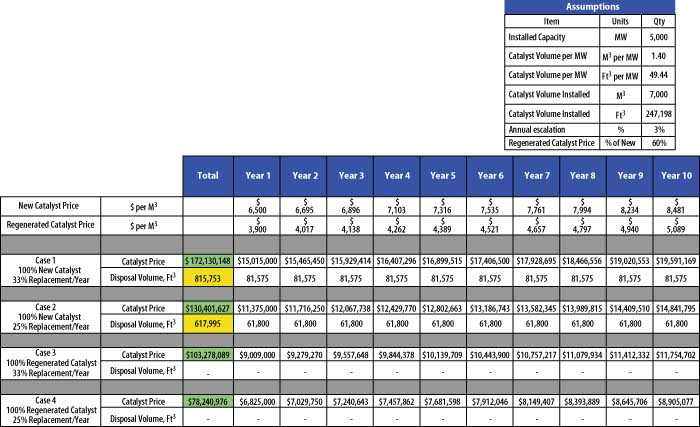 4. One thousand megawatts worth of deactivated SCR catalyst is stored in a 15,000-ft2 warehouse at the SCR-Tech/CoaLogix plant in Charlotte, North Carolina. Courtesy: SCR-Tech

Even with proper operation and maintenance of the reactor, SCR catalysts will inevitably deactivate and the catalyst will eventually reach a point at which regeneration is no longer an option. But until that time, extending catalyst life through regeneration appears to be the best option.