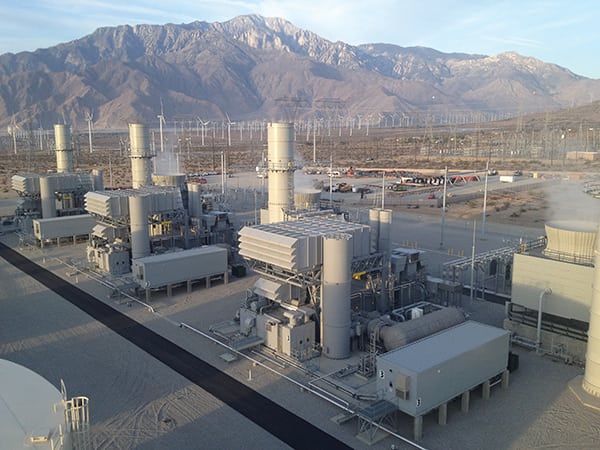 Awash in a sea of wind turbines, California’s Coachella Valley needed reliable peaking generation to back up its intermittent wind power. Competitive Power Ventures answered the call with the eight-unit, 800-MW Sentinel plant.

Driving west on Interstate 10 through the Mojave Desert in California is a mostly monotonous experience of sand, scrub brush, and rolling, rocky hillsides. When you enter the Coachella Valley north of the Salton Sea, the desert is increasingly broken up by the golf courses and resorts of Palm Springs. But you soon reach the San Gorgonio Pass, which separates the desert from the greater Los Angeles area, and your attention is seized by another sight entirely.

On both sides of the highway, spreading over the desert and climbing the mountains around the pass, are wind turbines–thousands of them, large and small, old and new, stretching for miles across the sand and hills. It’s the oldest utility-scale wind farm in the U.S., and still one of the largest, comprising somewhere between 3,000 and 4,000 turbines with a total capacity between 600 MW and 900 MW (exact figures are difficult to come by because of the large number of individual owners and unclear data on which turbines are still operational).

The San Gorgonio Pass is one of the windiest spots in the U.S., as it’s one of the few gaps in the mountain ranges around Los Angeles. Created by the San Andreas Fault, which runs through it, the pass splits a range that rises to nearly 9,000 feet on both sides. On most days, cool, moist air from along the coast is drawn into the hot, dry air of the desert, creating winds that average 14 mph to 20 mph upwards of 300 days a year.

All that wind created a mecca for wind farm development in the 1980s, and the area has long been an important element of California’s renewable energy fleet. But as the state’s needs have grown with the passage of its 33%-by-2020 renewables portfolio standard (RPS), the need for peaking generation and reliable ancillary services has grown with it.

In the mid-2000s, as part of its long-range planning, Southern California Edison (SCE) began looking for new generation to meet its needs for capacity and ancillary services in the Los Angeles area, particularly Coachella Valley. Maryland-based Competitive Power Ventures (CPV), an independent generator focused on natural gas and wind, proposed building an eight-unit peaking plant near Palm Springs. SCE and CPV entered a 10-year power purchase agreement for generation from five of the eight units in February 2007 (later extended to all eight), and CPV submitted its application for certification to the California Energy Commission (CEC) that June.

The 37-acre site—surrounded on all sides by wind turbines—was chosen because of a number of advantages. Though greenfield, the area was zoned for industrial use and would have only limited environmental impact. One of the SCE substations that gathers generation from the area wind farms is about 700 feet away, and the natural gas supply line could be extended from a small peaker plant a few miles further on.

But despite the advantages, the project soon ran into a completely unrelated roadblock that halted development for more than a year. In August 2007, the South Coast Air Quality Management District (SCAQMD), which oversees emissions permitting in the area, amended its rules for how it issued offset credits for proposed power plant emissions. The new rule was challenged in court, and in June 2008, the California Superior Court threw out the revised approach, which meant that the SCAQMD had no authority to issue credits until a new rule was in place. Projects without emissions permits, like Sentinel, had no way to go forward unless they could purchase the credits on the open market—a very expensive proposition. The SCAQMD appealed the decision, but lost.

The threat this ruling presented to generation planning in California caused the state legislature to pass a law in September 2009 allowing SCAQMD to issue a limited number of unreleased credits. Permitting for Sentinel was then able to resume, and the CEC issued final approval in December 2010. This cleared the way to close financing on the $900 million project the following May. GE Energy Financial Services and Diamond Generating Corp. (DGC) joined the project, with a total of 23 banks providing nearly $800 million in credit facilities. (In fact, interest in the project was so high that the syndicated loan was 2.4 times oversubscribed.)

Gemma Power Systems was awarded the engineering, procurement, and construction contract, and ground was broken in July 2011. Construction proceeded ahead of schedule, and the plant was able to begin testing of the first three turbines in January 2013. Though completion was originally planned for late summer, the plant reached commercial operation in mid-May, more than three months early. This was despite having to conduct much of the construction at night or in the early morning hours because of high temperatures during the day.

In all, 350 direct and indirect jobs were created by the project, and more than 731,000 man-hours were put in. The plant is now jointly owned by CPV (which serves as plant manager), DGC (which operates the facility), and other private investors.

The 800-MW CPV Sentinel plant is designed from the ground up to be a fast-responding, environmentally friendly facility. Power is provided by eight General Electric LMS100 aeroderivative gas turbines operating in simple cycle mode (Figure 1). Emissions are kept low through the use of water-injected combustors with selective catalytic reduction and oxidation catalyst.

To maintain efficiency in an environment where ambient temperatures can exceed 120F, the turbines employ evaporative cooling for inlet air as well as intercooling. Hot air from the first compressor section is passed through an external water-cooled heat exchanger before being returned to the compressor. Cooling for this and other processes is provided by single-cell cooling towers (one for each turbine) using recirculating water. The plant employs membrane-based wastewater treatment processes coupled with a crystallizer zero-liquid discharge system to handle project wastewater.

To reduce its impact on local water supplies, CPV Sentinel purchases water for the local Desert Water Agency (DWA) equal to 108% of its use. The project has also funded a variety of water efficiency measures for DWA to minimize its impact on scarce local water supplies. The arrangement has already recharged the local aquifer with more water than the plant is expected to use during its first 10 years of operation.

The state-of-the-art facility requires a staff of only 14. Output can range from 50 MW to 800 MW, and the LMS100 turbines can reach full output from cold start in as little as 10 minutes. The use of multiple small turbines allows the plant to maintain better than 41% efficiency from 100 MW all the way up to full power. Each unit can be dispatched and controlled independently.

As a peaker plant, CPV Sentinel’s generation is capped at 30% yearly capacity factor and a total of 300 starts and 2,500 hours of operation per year. In its first year, it has been dispatched frequently and has seen better than 99% availability. In addition to generation, the plant is providing spinning and non-spinning reserve and frequency regulation services for CAISO and SCE.

For serving as a key element in Southern California’s reliability planning and completing this low-impact project ahead of schedule, CPV Sentinel is recognized as a POWER Top Plant. ■