In December 2009, representatives of nearly 200 governments met in Copenhagen, Denmark, to hammer out the details of a new climate change treaty. Treaty drafts indicated that industrialized countries would be required to reduce their greenhouse gas emissions—primarily carbon dioxide (CO2)—up to 80% by 2050. Developing countries would not be required to reduce emissions much, if at all. However, no agreement was reached and no firm emissions reduction commitments were made.

Before the conference, many officials claimed that failure to reach an agreement would lead to disaster. But the truth is that no agreement reached in Copenhagen would have reduced anthropogenic (human-caused) greenhouse gas emissions worldwide—much less reduced projected global temperature increases (assuming that humans are causing climate change). Indeed, it has long been recognized that no policies undertaken solely by Western countries can reduce future global warming, regardless of the developed world’s past and current contributions to atmospheric greenhouse gas concentrations. Rather, fast-growing developing countries control the climate change thermostat.

As early as 1995, the United Nations Intergovernmental Panel on Climate Change (IPCC) and the International Energy Agency (IEA) recognized that most of the growth in emissions in the 21st century would occur in the developing world:

These predictions proved to be very optimistic. Since 2003, China has doubled its greenhouse gas emissions, surpassing the U.S. as the world’s largest emitter. In fact, China already emits more CO2 than the U.S. and Canada combined, and will likely surpass the combined total of the U.S., Canada, and Japan by 2015.

Recognizing its contribution to greenhouse gas emissions, President Hu Jintao reported that China plans to reduce its CO2 emissions intensity—emissions per unit of gross domestic product (GDP)—by 4% per year for five years. Assuming this policy continues, China’s CO2 emissions intensity will fall 70% by 2040. India, currently the fourth biggest greenhouse gas emitter, indicated that it will reduce its CO2 intensity 20% by 2020. The problem, however, is that reducing intensity will not reduce overall emissions or atmospheric greenhouse gas concentrations. Richard Muller, a physics professor at the University of California, Berkeley, recently examined IEA data and found:

Indeed, every 10% cut in U.S. emissions would be negated by one year of China’s growth. Furthermore, Muller’s calculations show: 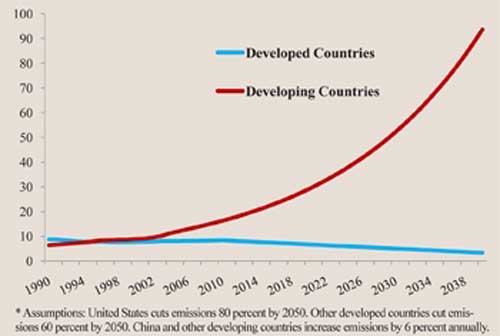 CO2 emissions from developing and developed countries (billions of tons). Source: Muller & Associates, “Naked Copenhagen: The Numbers Behind the Op-Ed.” 2009

He concludes that even if China and India’s goals are met—and other developing countries make similar cuts—total atmospheric CO2 would rise from 385 parts per million currently to 700 parts per million by 2080.

What This Means for Warming

The economic consequences of Western CO2 emissions reductions may discourage reductions in the developing world. U.S. efforts to cut emissions will require less use of plentiful, inexpensive and reliable fossil fuels. If cuts in U.S. CO2 output reduce economic growth and GDP, and increase unemployment—as most economists believe they will—developing countries will not follow the U.S.’ lead.

What Can Be Done About Future Warming

Muller suggests that if developed countries believe that anthropogenic climate change is a threat, they should assist developing countries in making reductions.

First, he recommends that Western countries subsidize the development of carbon capture and sequestration (CCS) technology, and the construction of CCS facilities to capture CO2 from such sources as coal-fired power plants. The CO2 could be transported by pipeline to sites where it is injected deep into subsurface geological formations for indefinite isolation. This technology would be especially valuable in China, where a new, traditional coal-fired power plant is installed each week. Subsidizing CCS technology in places like China would be a cost-effective strategy, because a dollar spent in China can reduce much more CO2 than a dollar spent in the U.S.

Geoengineering solutions are a second response to climate change. For instance, increasing the amount of sulfur dioxide (SO2) in the atmosphere would reflect more sunlight back into space, cooling the climate. This happens naturally during volcanic eruptions. A 1991 eruption in the Philippines spewed such huge amounts of SO2 that the average global temperature fell 0.5 degrees Celsius for almost two years—dropping by about the same amount as the climate warming experienced over the last 100 years.

A third option would be to simply learn to adapt to global warming.

By itself, even an 80% cut in U.S. CO2 emissions would probably not have a measurable effect on future warming. The best climate policy would be to help emerging economies conserve energy and move rapidly toward less carbon-intensive energy sources, while developing the U.S. capacity to adapt to future climate change. Most importantly, politicians and the public need to recognize that make-the-West-bear-the-burden emissions reduction proposals are meaningless and likely counterproductive.

—H. Sterling Burnett is a senior fellow with the National Center for Policy Analysis. This commentary originally appeared February 25, 2010 as an issue brief on www.ncpa.org and is reproduced by permission.