Chauncey Starr, founder of EPRI—the Electric Power Research Institute—and its first CEO, passed away on April 17, 2007. The previous day, a celebration of his recent 95th birthday had been held at EPRI, where Chauncey held forth for more than an hour on his life experiences and lessons learned. He was in fine fettle. 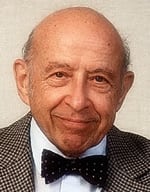 The following morning, while preparing to leave for his office at EPRI—as he had been doing ever since his "official" retirement 30 years earlier—he took his usual short nap after breakfast. But that morning he didn’t wake up. It is hard to conceive of a more elegant way to depart one’s life after a long and fulfilling career of service and contributions to this country and the welfare of its people. During my own 11 years at EPRI, I was privileged to have Chauncey as my mentor, collaborator, and friend.

The education of an innovative mind

Chauncey was born April 14, 1912, in Newark, New Jersey, the second son of a Jewish-Russian immigrant family. After being educated in the local public school system, he went on to earn undergraduate and graduate degrees in engineering and physics at Rennselaer Polytechnic Institute (RPI). His 1935 PhD thesis at RPI was on the properties of rectifying copper oxide junctions. I once kidded him that if had managed to put some calcium impurities in his samples, he might have discovered today’s family of high-temperature cuprate superconductors.

After RPI, Chauncey joined the group of Percy Bridgman at Harvard as a research associate. Bridgman was later to receive the Nobel Prize in physics for his work on the properties of materials under extreme high pressure. It was at Harvard that Chauncey displayed his knack for coming up with clever solutions to difficult experimental challenges such as extracting the intrinsic thermal transport properties of a given sample out of the confounding background of its surrounding containment vessel. It is one of those inexplicable coincidences of life that in 1960, 25 years later, I undertook my graduate studies in that very same high-pressure group at Harvard, where several of my fellow students were still employing the measurement techniques Chauncey had pioneered.

In 1938, Chauncey moved to MIT’s Bitter Magnet Laboratory. There he continued to hone his experimental skills, now in cryogenic measurements on the magnetic properties of transition metal halides. In 1941, just before leaving MIT to join and lead the wartime effort at the Bureau of Ships on mine detection and protection methodology, he completed the design and construction of the first practical small-scale hydrogen liquefier.

Word quickly spread throughout the then-small community of American physicists of Chauncey’s technical and leadership skills, and in 1942 he was invited to join the staff of E.O. Lawrence at the University of California Radiation Laboratory.

Lawrence’s intention (largely unknown to Chauncey at the time) was to "train" Chauncey in the principles of cyclotron resonance for eventual reassignment to the "calutron" or "racetrack" U-235 separation effort at Oak Ridge, Tenn., where staff were experiencing great difficulty in reaching their production goals. Lawrence asked Chauncey to form and lead a team of several hundred engineers to troubleshoot the early production calutrons via experiments performed with a small pilot scale model he was to construct. (I later learned that one of these engineers was my cousin and godfather, a 1943 electrical engineering graduate of Clarkson Tech.) Improvements made were transferred to new production machines (the "beta" units), and by the spring of 1945, sufficient U-235 had been separated to provide critical mass for a weapon.

Many years later, Chauncey and Floyd Culler—then-head of chemical physics at Oak Ridge, and Chauncey’s successor as second CEO of EPRI—were in my office reminiscing about the days when they watched their technicians pick apart with tweezers flakes of U-235 imbedded in halide impurities for shipment to Los Alamos and assembly into the "Little Boy" bomb. Quite literally, the hair stood up on the back of my neck as I listened to them. On the morning of August 6, 1945, when the uranium atoms in those flakes split in the sky over Hiroshima, my father was stationed with the U.S. Navy in Manila Bay, part of the fleet then assembling for the invasion of Japan.

Chauncey told me many times that he believed President Truman’s decision to use atomic weapons against Japan was correct, because it made invasion unnecessary and thus saved countless thousands of Japanese and American lives that would otherwise have been sacrificed. Maybe my Dad’s would have been among them.

After the war, Chauncey transferred to the Clinton Lab at Oak Ridge to learn more about the nuclear power reactor design efforts started by Eugene Wigner and Alvin Weinberg. In 1946 he was asked by North American Rockwell to form and become president of a new division, Atomics International (AI), in order to pursue commercialization of the generation of electricity by nuclear power (then it was called "atomic power").

I am sure POWER readers are familiar with the history of the nuclear power industry, so I’ll forgo detailing Chauncey’s numerous contributions to it. However, one story is not generally known. It is Chauncey’s own tale of the creation of that industry. Be warned that it is slightly ribald in nature, which reflects the true "Chauncey-in-private."

By the late 1940s, the Atomic Energy Commission had approved two projects to pursue peaceful uses of atomic energy for electric power. One, with AI, was to involve the use of organic solutions and liquid sodium as coolants and heat transfer agents. The other design, more or less in competition with AI’s, was led by Wally Zinn at the Argonne National Laboratory and would employ boiling water or other liquid alkali metals. As told by Chauncey, a meeting was held at Argonne to discuss these differences, and the talk became rather contentious. During a break, he and Zinn retired to the men’s room, and while relieving themselves at adjacent urinals, agreed to stop arguing and work together. What followed is history. Chauncey would often remark to me that he found such "executive bladder adjournments" excellent opportunities for negotiation.

After 20 years with AI, in 1966 he accepted a position as dean of UCLA’s Engineering and Applied Science Department. At UCLA, Chauncey instituted a degreed major in engineering medicine, the first such program in the country, and founded the discipline of risk analysis, motivated largely by concerns over nuclear safety issues.

The father of EPRI

The 1960s also saw several large-scale blackouts, especially the November 1965 Northeast grid failure. These events put public pressure on Congress and local legislatures to "do something about it." American electric utility companies proposed the formation of an industry-funded institute to support long-range R&D on the industry’s behalf. Chauncey was asked to lead this effort, and he agreed to take the job provided he be given free rein for five years to structure its portfolio without interference from its utility oversight board, which included many utility CEOs. He was 60 at the time, and would retire at 65 under the rules of incorporation of the new organization, which he named the Electric Power Research Institute in 1972.

His freedom of action was quickly put to the test when the issue of acid rain from sulfur-emitting oil- and coal-fired power plants emerged. The industry was very nervous about having EPRI address environmental issues, but Chauncey argued that it was impossible to undertake broadscale technical development without considering the environmental, social, and economic parameters. The emissions issue could be ignored, he told members of the board, "But if you do, you’ll find the government will force you to address these sorts of problems at a much higher price than if you take action on your own." Chauncey got his way, and thus was the beginning of EPRI’s Environmental Division, which became one of its most successful long-term endeavors.

Chauncey’s efforts during WWII and his experience running AI, the UCLA engineering department, and then EPRI gave rise to his love of grand schemes that would require multigenerational planning (see box). I saw this aspect of him on many occasions, but none more so than when I told him about a scheme I was working on to supply both hydrogen and electricity over a superconducting cable to urban communities. He remarked, "Paul, that’s a great idea, but you’re thinking too small. We need to expand this concept to a continental scale for implementation over the next five to six decades."

Thus arose the model for a Continental SuperGrid, a symbiosis of nuclear, hydrogen, and superconducting technologies to create an environmentally benign, non-eco-invasive future energy generation and delivery infrastructure. We published the essential elements of this vision in a July 2006 article in Scientific American coauthored by Chauncey, Tom Overbye of the University of Illinois at Urbana-Champaign, and myself. It was to be Chauncey’s final publication.

Throughout his life, Chauncey received awards and recognition—honorary degrees, membership in national and international societies, medals from foreign governments, fellow status in professional societies—too numerous to list here. But I suspect his most personally satisfying recognition came near the end of his days.

It was said about Lincoln on the occasion of his tragic assassination in midlife that, "Now he belongs to the ages." Chauncey Starr’s life exceeded by a decade and a half the biblical "four score and ten," thus in a sense the "ages returned to him," and he was able to witness the rebirth of interest in nuclear power in the United States—the fruit of his younger days, which had been abandoned for so many years.

—Dr. Paul M. Grant is an IBM research staff member emeritus and an EPRI science fellow (retired). He now holds an appointment as visiting scholar in applied physics at Stanford University. Dr. Grant is also an independent energy consultant and can be reached at w2agz@pacbell.net or at www.w2agz.com.

To hear Chauncey Starr talk about EPRI’s founding and ideals, as well as the future of electricity infrastructure, you can listen to two Flash presentations on EPRI’s web site. At www.epri.com, click the Corporate Overview link in the About EPRI dropdown. There you’ll find a link to "EPRI’s Founder: Reflections and Ideas," in which Starr talks about how EPRI developed a nontraditional R&D facility that we now would call a virtual R&D organization.

In the other presentation, "Exploring Vital Long-Range Energy Topics," Starr calls for attention to much-needed upgrading of the U.S. electrical system and work on the challenge of bulk energy storage. He notes that "daily pressure on utilities for economic optimization of capital assets discourages" R&D programs. Clearly, he saw the importance of EPRI’s work in facilitating such research.