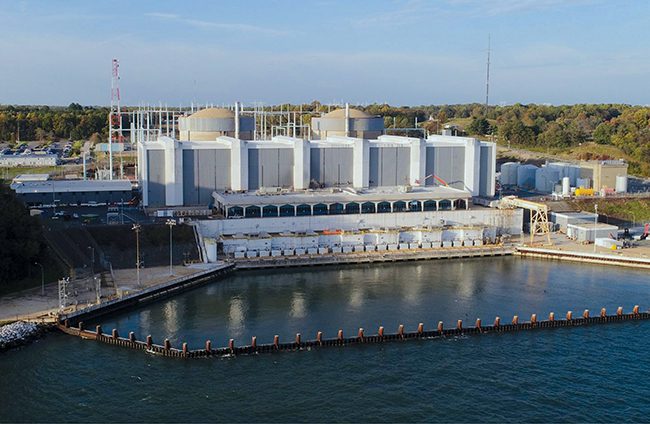 There’s always a catalyst in every plant’s inception, and for Calvert Cliffs Nuclear Power Plant, it was as Baltimore Gas & Electric (BG&E) commemorated its Double Diamond 150th Anniversary in 1965 with a significant addition to its iconic headquarters in Charles Center and doled out bonuses to customers. “On the eve of the celebration, a rush-hour blackout that began with a faulty relay in Canada and spread through eight states, affecting 30 million residents of the Northeast, shook the whole utility industry,” the company recalls in a 2016-published anniversary book.

At the time, nuclear power had already been on the company’s agenda since the early 1950s, mainly because fossil energy—particularly coal—was becoming expensive and increasingly a target for the budding grassroots environmental movement. “All of leadership,” including the company’s chair Jack Penn, C.E. Utermohle Jr., and nuclear specialist George McGowan, were committed to building a nuclear plant, the book notes. By 1967, the company announced plans to build a plant utilizing pressurized water reactor (PWR) technology at Calvert Cliffs on the western shore of the Chesapeake Bay in Calvert County, Maryland, about 45 miles southeast of Washington D.C. and 60 miles south of Baltimore.

Calvert Cliffs obtained a construction permit in 1968 from the nation’s nuclear regulator, then known as the Atomic Energy Commission (AEC). In 1969, however, Congress passed the National Environmental Policy Act (NEPA), directing the AEC to implement the law. As momentum grew for more stringent environmental scrutiny—with passage of the Clean Air Act and the Water Quality Improvement Act in 1970—the AEC issued rules proposing to require applicants for nuclear construction permits and operating licenses to prepare their own environmental reports, though the rules did not provide a mandate for AEC to consider environmental impacts of each new plant unless challenged.

Following a citizen group challenge over Calvert Cliffs’ potential environmental impact, the D.C. Circuit Court of Appeals in 1971 issued a landmark decision that, for the first time, interpreted NEPA and set the tone for all subsequent NEPA cases. As a result of the decision, the AEC mandated that nuclear plants perform complete environmental impact statements (EISs), adding two years to every U.S. plant’s construction timeframe in addition to the nominal six already expected. Trailblazing a pathway for many of the nation’s reactors, Calvert Cliffs became the first nuclear power team in the U.S. to work through an EIS under NEPA. The environmental studies conducted concluded that Calvert Cliffs would produce electricity safely and efficiently in concert with the delicate environment of the Chesapeake Bay.

In 1975 and 1977, with an EIS approved by the federal government, Calvert Cliffs began operations. The Nuclear Regulatory Commission (NRC, which inherited the AEC’s nuclear regulatory functions in 1975) ultimately granted the plant’s Unit 1 license through 2014 and Unit 2 through 2016. Calvert Cliffs notably made history again in 2000 by becoming the first nuclear power plant in the U.S. to earn extended licenses from the NRC. The license extensions will allow Unit 1 to run through 2034 and Unit 2 through 2036.

By the time Calvert Cliffs 1 began operation in 1975, the glimmer surrounding nuclear as a feasible replacement for fossil power that was rife just a decade before had started to dim, driven by caution and concern about surging capital costs for large infrastructure projects, the government’s attitude, and flattened power demand. Calvert Cliffs’ total costs surged from the original price tag of $300 million to an estimated $750 million (in 1977 dollars). Costs were driven up for various reasons as the enormity of nuclear projects that cropped up in the late 1960s competed against each other for equipment, material, components, and skilled labor. They also suffered delays from new licensing processes, modifications required to meet design or construction errors, and emerging safety and environmental mandates.

At the time, utilities defended their decisions to abandon planned nuclear projects, underscoring political risks related to the climate for nuclear power construction. They stressed, however, that they still had faith that nuclear would endure as an economical and safe energy source.

A major proponent for staying the course at Calvert Cliffs, even after the accident at Three Mile Island, was BG&E’s then-president, Bernard C. Trueschler, who underscored the benefits of a diversified fleet amid projections that annual demand would grow by as much as 4.5%. Trueschler reportedly told shareholders Unit 1 saved consumers $50 million in 1975 just by displacing the use of other fuels. During the first 10 months of 1976, BG&E said it produced 40% of its power from the nuclear unit and saved 400 million gallons of oil and $68 million in fuel charges. By 1977, when Unit 2 came online, the plant supplied 57% of BG&E’s total output, helping the company save half a billion dollars in fuel expenses.

Over the next few decades, as the electric industry morphed to adapt to new federal and state requirements, technology advancements, and a changing consumer base, so did BG&E. In 1985, responding to an emerging wave of deregulation that turned energy into a competitively traded commodity, BG&E created a diversified holding company, Constellation Energy Group (CEG), marking its foray into the for-profit realm. In 1993, it changed its name to BGE.

When Maryland passed deregulation legislation in 1999, the company adjusted to its role within the PJM Interconnection wholesale electricity market. “BGE, once the parent of Constellation, was now restructured as the child,” the company recalls. The company spun off its nine power plants and became a customer-centered delivery system of “pipes, wires, and skilled employees,” it said.

CEG, meanwhile, morphed into a wholesale supply and trading business that suffered dismally during the economic downturn in 2008 and plunged into a liquidity crisis. To raise cash and avert bankruptcy, the company agreed to sell half its nuclear plant business to Électricité de France SA (EDF) under a new joint venture, UniStar. While the agreement envisioned the construction of two more units at Calvert Cliffs, the goodwill in the joint venture fell apart in 2010 after CEG rejected a $7.6 billion Department of Energy loan guarantee offer for Calvert Cliffs 3.

CEG ultimately relinquished its 50.01% UniStar stake in Calvert Cliffs to Exelon Corp. as part of its $7.9 billion merger with the Chicago-based energy company in 2012. In 2019, EDF exercised a put option to sell its 49.99% interest in Calvert Cliffs (along with R.E. Ginna and Nine Mile Point in upstate New York), allowing Exelon to acquire full ownership of the plants. However, in February 2022, Exelon spun off its competitive generating assets into Constellation Energy Corp. while retaining its transmission and distribution utility businesses under the Exelon brand. Today, Constellation Energy is headquartered in Baltimore and holds a 32-GW fleet, including Calvert Cliffs and a dozen other nuclear power plants.

A Series of Achievements

Despite its many owners, Calvert Cliffs has, throughout its 47-year lifetime, continuously demonstrated stellar achievements. It has marked a long list of industry records for outage work, striving for peak efficiency and reliability. This spring, workers at the plant replaced the Unit 1 main generator connections to prime the plant’s two reactors to run near 100% capacity during the scorching summer months.

A recently issued report by The Brattle Group suggests the plant operates at a capacity factor of well over 90% and produces 15 TWh of carbon-free energy annually—“the equivalent of adding a bit more than 20% to Maryland’s [renewable portfolio standard] requirements.” And while Calvert Cliffs provides 2% of power output in PJM, that’s substantial compared to the 6% provided by PJM’s entire renewable output, the report notes. The plant continues to be integral for Maryland, which imports 40% of its power. It provides 20% of the state’s needs, and 81% of its in-state clean generation.

But the plant is also trailblazing on crucial technology that could help the industry improve the existing U.S. nuclear fleet’s cost competitiveness in power markets increasingly inundated with cheap renewables and natural gas power. Constellation in November 2021 revealed that Unit 2 is hosting the nation’s first four-to-six-year test of a complete accident-tolerant fuel (ATF) assembly. Inserted in Unit 2 during a recent refueling outage under an amended NRC operating license, the advanced fuel will be routinely inspected to monitor its performance.

The pioneering lead fuel assembly (LFA) features a Framatome PROtect fuel design developed under the U.S. Department of Energy’s Accident Tolerant Fuel program. The LFA includes 176 chromium-coated rods and chromia-enhanced pellets that are “more tolerant to changes in reactor core temperatures increasing coping time, while reducing corrosion and the production of hydrogen under high-temperature conditions,” the French nuclear giant said. The test is one of several ongoing at U.S. nuclear plants as part of a plan to initiate the commercial introduction of ATFs by 2025.