Marmaduke Surfaceblow was a crusty character, providing POWER magazine readers with imaginative tales of engineering feats, and lending his name to one of our most-coveted awards.

He might be fictional, but Marmaduke Surfaceblow became synonymous with POWER magazine, a colorful character with a distinctive way of finding solutions to engineering problems. Author Stephen Elonka introduced the imposing cigar-smoking, gin-swilling Surfaceblow in POWER in 1948, and he was a worthy mascot for the brand, lending his name to the magazine’s Marmaduke Award for excellence in power plant problem-solving through 2014. Today it’s known as the Reinvention Award.

Elonka, who was born in 1910 and died in 1983, said the character’s name was a combination of the Scottish name Marmaduke, and Surfaceblow, a term for the action of removing impurities from a steam boiler. Elonka himself authored several technical books, including the well-known Standard Plant Operators Manual, originally published in 1959.

Marmaduke Surfaceblow (Figure 1) was a machine engineer by trade, with great knowledge of the inner workings of machinery. Elonka painted a descriptive picture of Surfaceblow in every story, noting his 6-foot-4 height, steelbrush mustache, and size 16 “canal boat” shoes. He frequently referred to the character’s affinity for smoking Ringelmann #5 cigars. The Ringelmann scale, developed by a French professor in 1888, measures the apparent density of smoke, from 0 (white) to 5 (all black). It was written that Surfaceblow’s #5 cigars “produce acrid clouds, leaving others teary-eyed.” 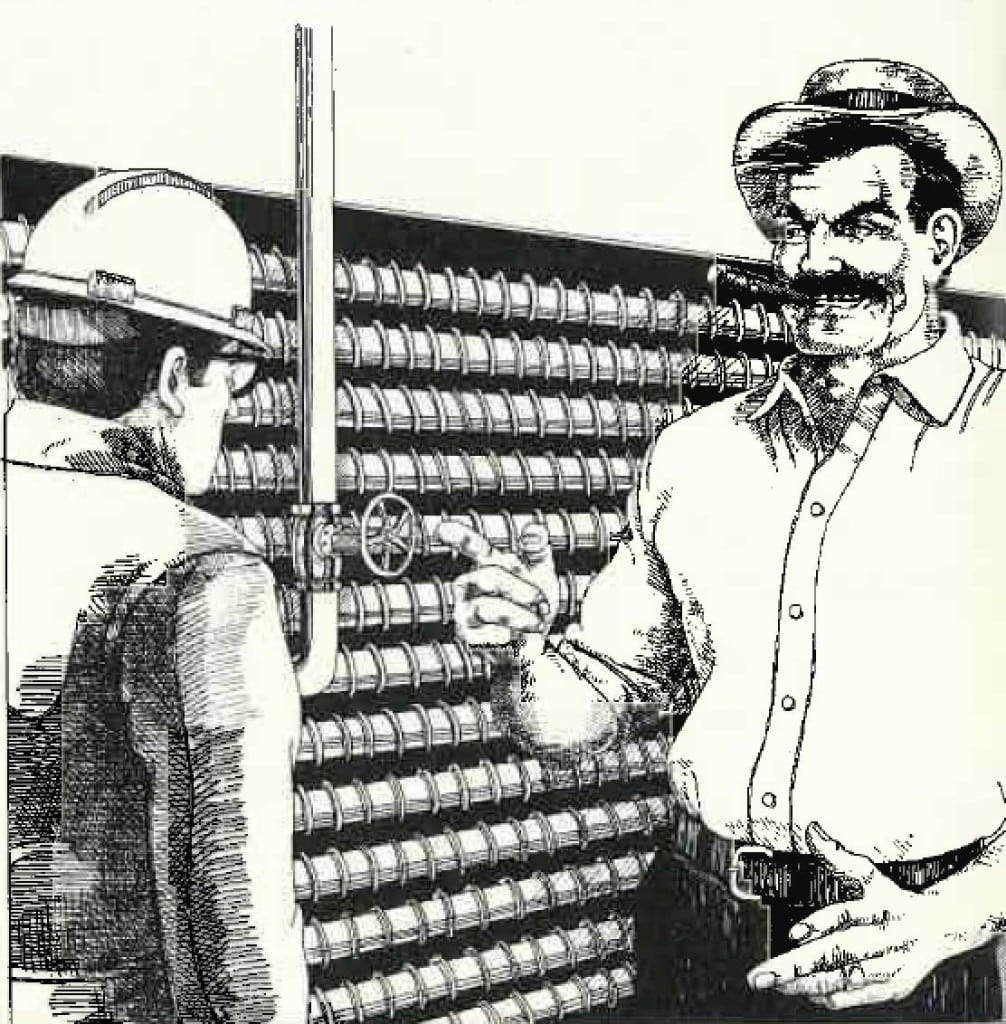 Surfaceblow’s office was above O’Houlihan’s Machine Shop in the Hells Kitchen neighborhood of New York City. Elonka’s stories often began there, with a gathering of engineers, talking about various aspects of their jobs. Surfaceblow would then take the topic and run with it, regaling his listeners with a tale of how he arrived at a solution to the problem. It was said that some of the stories were inspired by actual events.

One story involved an engineer relating a story about a difficult, hard-to-start diesel engine. Surfaceblow responded in his booming foghorn voice: “’Bilgewater on balky diesels! I’ll tell you about the time I ran a boat engine on water!” As he talked, he turned up his induced draft fan and filled the room with his acrid cigar smoke.

“ ’Bilgewater on balky diesels! I’ll tell you about the time I ran a boat engine on water!” —Marmaduke Surfaceblow

Surfaceblow’s knowledge of machinery came from his hands-on experience with the operation of steam power plants. Elonka later in the series introduced a son, Guy Newcomen Surfaceblow, who also had field experience to go with a university education.

—Darrell Proctor is an associate editor with POWER magazine.