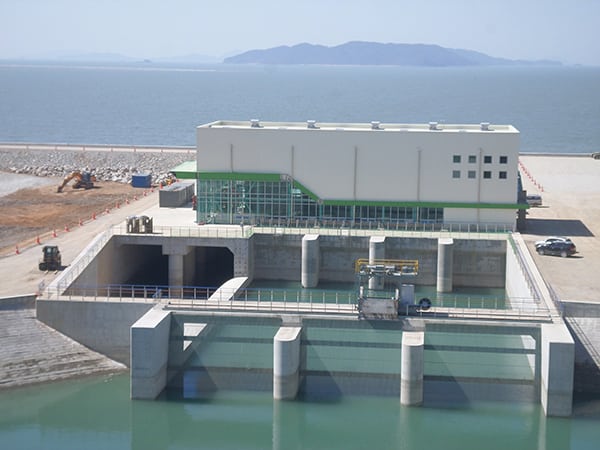 Few people would view a large coal plant as a place to generate renewable energy. But a Korean utility took a chance on an innovative approach, harnessing the latent energy of the plant’s cooling effluent to drive a trio of hydroelectric plants, and in so doing, created a promising niche for small hydropower development.

Small is beautiful in the hydropower business, if trends over the past decade are any indication. While giant, multi-gigawatt plants continue to be built around the world, some of the most interesting projects are a fraction of their size.

Technological innovations over this period, as well as a recognition that many areas have built out their large hydro capacity, have been the driving forces behind this emerging sector. Development of efficient, low-rpm turbines using permanent magnet generators, improvements in fish protection technology, and advances in power-conversion electronics have made it possible to economically generate electricity in places where it was once a pipe dream (see “Small Hydro, Big Opportunity” in the May 2013 issue).

Most of the activity in this area has focused on building hydropower plants on smaller rivers where reservoirs are not feasible, and on adding generation to existing dams where a reservoir exists but has never been exploited for generating electricity (see “A New Day for North American Hydropower?” in the October 2014 issue). Because newer technology can operate with much lower heads than traditional hydropower, even small flows and bodies of water can generate economic electricity.

But some especially interesting projects have identified spots where artificial flows of water have been created as the result of previous development, such as the unexploited effluent from a large hydropower plant. One example of that approach is the Ashta Hydropower Plant in Albania, a 2014 POWER Top Plant. This year, we’re honoring a similar project, one that added hydroelectric generation to a place few would ever expect to find it: The cooling system of a large baseload coal plant. 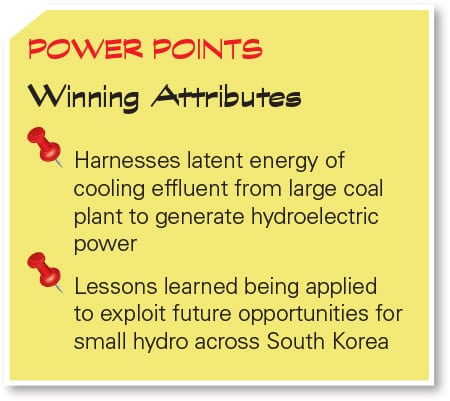 The Yeongheung Power Station, built on an island in the city of Incheon, South Korea, is one of the largest coal-fired power plants in the world. The six-unit, 5,080-MW facility first began operations in 2004 when Unit 1 came online. Since then, owner Korea South East Power Co. (formerly KEPCO, recently renamed KOEN) has added capacity in two-unit blocks, first in 2008 and again in 2014. The enormous capacity of the plant serves the equally enormous demand from the nation’s capital, Seoul, about 40 kilometers away.

Yeongheung Power Station has been honored by POWER twice before because of its continuing embrace of advanced technology, efficient and reliable operations, and creative, problem-solving staff. Units 1 and 2 won Top Plant honors in 2005, with Unit 3 winning in 2012.

But many things have changed in the Korean power market since 2004. In 2012, the nation adopted a renewable portfolio standard aiming to get 10% of total generation from renewable sources by 2024. Among the requirements was that the nation’s utilities purchase renewable energy certificates or earn them by building renewable capacity. That’s meant a rush to add new wind and solar generation, especially where it can be done easily at existing plants. Yeongheung Power Station currently operates 2 MW of solar photovoltaic generation as well as 46 MW of wind on-site or elsewhere on the island.

But KOEN had been looking for other opportunities to generate renewable energy well before this. In the mid-2000s, the company came up with the idea of exploiting the effluent from its coastal power plants for hydroelectric generation. A 3-MW pilot facility was built at the Samcheonpo power plant in 2006. This was the first such project in the world, and, based on the experience and lessons learned, KOEN decided to implement the approach at Yeongheung.

Building a hydroelectric plant at the outlet of a power plant cooling system is nowhere near as simple as it might seem.

The challenge is not just that the cooling flow may change as the plant’s output changes. For a large baseload plant like Yeongheung, which serves a major demand center, that isn’t a big consideration. The problem stems from the way a hydroelectric plant works: The plant’s ability to generate power is dependent on the effective head, that is, the difference in height between the incoming flow and the outlet. And when the outlet is the ocean, the effective head is changing continuously with the tides.

The problem is exacerbated at Yeongheung because the Incheon area has some of the largest tides in the world, with a range between high and low that averages almost 30 feet. That means a hydroelectric plant built into its cooling system needs to adjust to widely varying conditions throughout the day, with the angles of the runner blades and wicket gates changing as flow rates and effective head vary.

Fortunately, because tides are predictable, the designers were able to build a sophisticated control system that maintains efficient operations as the effective head rises and falls. The controls are also linked to the power plants by monitoring the number of cooling pumps in operation, since this has a direct effect on the outlet flow from the condenser.

The first ocean hydro plant was installed at the outlet of Units 3 and 4. This 3-MW system came online in 2008. Based on the success of that facility, a larger 4.6-MW system was added to the outlet of Units 1 and 2 in 2012. The third facility, the largest at 5 MW, was planned for Units 5 and 6, which were then under construction.

Because of site constraints, Ocean Hydro Plant III needed to be located away from the plant at the end of a lengthy discharge channel built around the Units 5 and 6 ash pond (Figure 1). Coordinating construction of the channel, hydro plant, ash pond, and main plant required careful planning and coordination between the various teams, and some adjustment of the construction timelines was necessary to keep everything on schedule.

Civil engineering work and heavy construction on the third plant took place from late 2012 to late 2013, with the turbines and auxiliary equipment being installed in early 2014. Following testing and evaluations, Ocean Hydro Plant III began operations in mid-2014. Korean firms Gabjin General Construction and Daekwang Engineering & Construction handled the civil engineering and construction, and installation of the runners and auxiliary equipment, respectively. The turbines and associated components were supplied by Global Hydro Energy.

The plants use Kaplan-type turbines, which are designed for use with smaller heads than traditional Francis turbines. During normal operation, the plants stop twice a day at high tide when the effective head is too small. In addition to tidal variations, the output also varies with the seasons. Because the coal plants need a higher cooling flow in the summer, when ocean temperatures are higher, the ocean hydro plants generate more power then than they do during winter, when flows are smaller.

A planned fourth block at Yeongheung was indefinitely postponed in 2015 after the central government opted to build a nuclear plant instead. However, in the event that Units 7 and 8 are built, a fourth ocean hydro plant is planned for that block as well, and it will use some of the same infrastructure as the third plant. Regardless of the future of Yeongheung, KOEN is using its expertise with this ocean hydro technology to explore future systems at other power plants, as well as wastewater treatment plants elsewhere in the nation. ■