The Pacific Northwest is endowed with some of the best water resources in the U.S. The steep gradient of the Columbia River and numerous dams across its tributaries provide an incredible opportunity to produce tremendous amounts of renewable hydroelectric power. Hydropower alone provides over 75% of the region’s electricity.

The geography of the Columbia River Gorge also provides for significant wind generation potential. Over the past four years, the region’s installed wind power capacity has doubled.

The presence of both renewable forms of generation in large quantities in the same region has led to several operational challenges for the transmission grid operator, the federal agency Bonneville Power Administration (BPA). Although the region typically exports surplus power to load centers in California, there are periods of time when wind power and hydropower exceed the regional demand for electricity. The competition between wind and water has intensified over the past few years. Due to transmission limitations in the Pacific Northwest system, all the extra energy generated by wind and hydro cannot be exported to markets in the east or south. As a result, BPA has had to develop protocols to handle “excess” generation situations when the transmission system cannot absorb additional surplus power. Recent developments suggest that wind may continue to be curtailed ahead of hydro to protect salmon habitat, a protocol that requires BPA to force certain wind units to turn off to maintain grid reliability.

Last year, several wind generation owners in the Northwest appealed to the U.S. Federal Energy Regulatory Commission (FERC), indicating that the treatment of curtailment has led to significant problems with wind facilities’ operations and profitability in the region. Any solution must strike a balance among all of the following interests:

BPA had more than 4.7 GW of installed wind generation as of May 2012 connected to its transmission system. Additional firm wind capacity of 2 GW to 3 GW is expected to come online in the next few years. Several of these facilities are concentrated in a narrow area along the lower Columbia region, creating significant competition and adding congestion constraints on the transmission network (Figure 1). 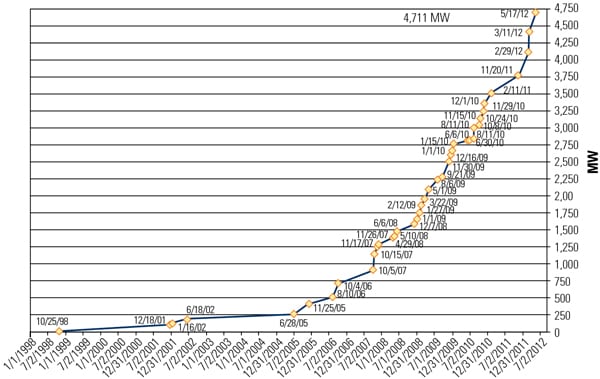 1.    Wind generation has significantly increased in the Bonneville Power Administration (BPA) service territory. BPA is a not-for-profit federal electric utility that operates the regional transmission grid comprising more than 15,000 miles of lines and associated substations that cover the states of Washington, Oregon, Idaho, and Montana. BPA does not come under Federal Energy Regulatory Commission (FERC) jurisdictional authority and, as a result, files reciprocity tariffs with FERC as required under Order 890. Source: BPA

One of the key challenges that the Northwest has faced in the past few years is the increasing amount of wind generation seeking interconnection into the transmission system. Northwest wind resource areas typically include coastal sites with strong but irregular storm-driven winter winds and summertime northwesterly winds. Several favorable wind areas lie east of the Cascade and Rocky Mountain ranges such as the Columbia River Gorge, Snoqualmie Pass, Marias Pass, and the north-south ridges in southeastern Oregon and southern Idaho. Even though, over the years, wind power facilities have been installed in a variety of regions, the majority of wind capacity remains concentrated in the area of the Columbia basin east of the Columbia River Gorge. Nearly 80% of the total regional wind capacity is located in a 160-mile corridor from The Dalles, Ore., to northeast of Pomeroy, Wash.

Concerns about wind curtailment and adequate transmission capacity are aggravated because the region’s transmission system has not kept pace with its increasing demand and resource portfolio in the past several years. However, recently, the region has been moving ahead with several critical transmission projects needed for reliability and resource integration. Several large projects in various stages of development should individually and collectively provide significant relief to the region’s growing levels of wind generation.

Although BPA has worked diligently to integrate increased amounts of wind generation into the transmission grid (through improved market protocols, enhanced wind forecasting, building and financing new transmission systems), the region still faces several concerns with respect to wind integration. Curtailment of wind generation is one of the key challenges because of transmission system limitations and the inability of the system to back down large hydroelectric generation facilities to accommodate excess wind.

Within the BPA system, several transmission interfaces are constrained (Figure 2), which indicates that there is minimal capacity available for new generation seeking interconnection into the system. System operators constantly monitor most of these interfaces to ensure that they do not exceed preset system operating limits. 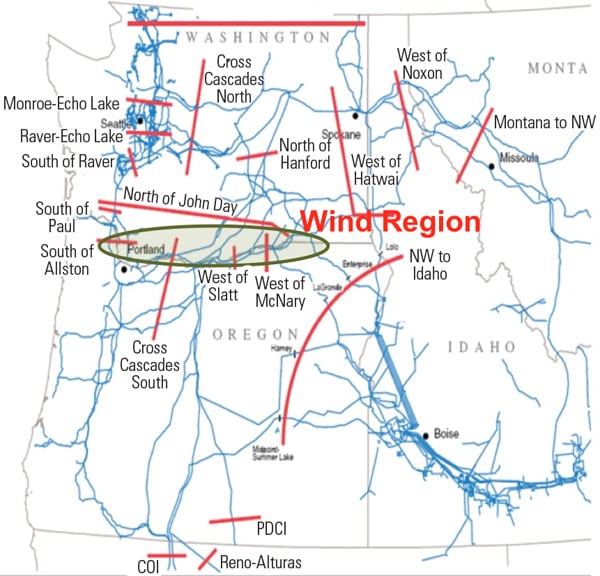 In order to address the transmission deficiencies, several initiatives have been implemented recently that have led to changes with respect to transmission reservations and planning. For example, the dynamic scheduling of transmission for wind resources has resulted in a modest increase in the available transmission capacity for certain wind facilities. BPA has also developed an innovative approach called Network Open Season (NOS) to identify future regional transmission needs by aligning resource development plans with projected load forecasts. The NOS process utilizes cluster studies to analyze impacts and new transmission facility requirements on an aggregated basis for long-term transmission requests. The process has been approved and has been initiated under BPA’s Open Access Transmission Tariff.

BPA also ranks as one of the balancing authorities with very high concentrations of wind power in its system. The wind power flowing into BPA’s grid has nearly doubled in each of the past four years, and such an increase not only constrains the existing transmission system but also poses a challenge for the schedule and dispatch of hydroelectric generation, which accounts for nearly 45% of the total generation capacity of BPA. Also, at times there is insufficient demand in BPA’s balancing authority to absorb all of the generated electricity from both wind and hydro resources. The two main transmission paths that transfer excess energy south are the 3,100-MW Path 65 (Pacific DC Intertie) and the 4,800-MW Path 66 (California-Oregon Intertie). Together, these two paths provide more than 7,500 MW of export capacity into California. (“Transmission path” refers to either an individual transmission line or a combination of parallel transmission lines on which the total power flow is limited to maintain system reliability.) Figure 3 shows the backbone transmission network of the region 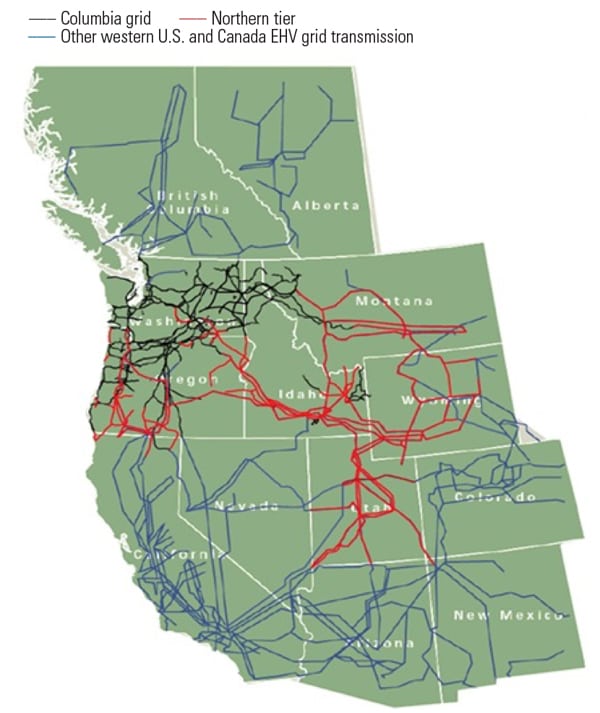 In 2010-11, the winter’s extra snow in the mountains caused the Columbia basin spring runoff to be  132% of the average flow expected at the Dalles dam on the Columbia River, making it the fourth-largest basin runoff in 30 years. This kind of high runoff creates conditions for hydroelectric dams to generate large amounts of electricity. The latest data for 2012 indicates that hydropower production increased 8.3% year-over-year suggesting an increased level of river flows from forecasted values.

Reduction of hydroelectric power generation during high water flow conditions can be accomplished by spilling water through dam spillways. However, sending more water through dam spillways would increase total dissolved gas (TDG) levels above Washington and Oregon water quality standards, and those higher levels threaten fish like salmon and steelhead with gas bubble trauma. The Columbia River provides a valuable habitat for several fish species, particularly salmon. Salmon are typically born in freshwater but migrate to the ocean and return to their place of birth to reproduce.

Gas bubble trauma is a condition that affects fish and other organisms when the sum of the partial pressures of all dissolved gases exceeds atmospheric pressure. At this level there is the potential for gas bubbles to develop in water and in the aquatic and marine organisms that inhabit the water. Spilling water results in habitat concerns that are a violation of BPA’s Clean Water Act and Endangered Species Act obligations.

During certain periods of the year, increased TDG levels, coupled with excess generation after meeting load and export requirements, have created a lack of demand for federal hydropower, even at zero cost. Coupled with transmission limitations and increasing wind generation, the inability to spill water and reduce hydroelectric generation adds to the complexities of managing the region’s grid system.

One way to minimize injection of these gases into water has been to continue operating hydro turbines, because water moved through turbines generally injects lower amounts of gases into water. Therefore, when water gas levels increase, BPA requires thermal and other generators to reduce output when there is low demand, and excess electricity produced by the federal utility’s hydro plants is provided free to the grid.

Wind generators producing electricity during these periods of excess supply and low demand are then subject to curtailment because hydroelectric facilities have to be in operation to preserve river TDG levels. This replacement of planned wind schedules each hour with hydropower is referred to as environmental redispatch (ER).

This ER mechanism was used to curtail wind generation during the period May 18 to July 10, 2011, resulting in the ER of approximately 97,500 MWh of wind and lost contract payments for several wind generators in the region. One of the key features of the ER scheme was that even those customers with firm transmission agreements could be curtailed due to the inability of BPA to spill excess water; consequently, wind generators may not receive contractual payments for their curtailed period. The ER system priorities are:

The whole concept of ER was very contentious, and several wind generation owners filed complaints with FERC in June 2011 indicating that BPA was not providing appropriate transmission service, as described in the tariff. Among several issues indicated in the June 2011 filing, one of the key concerns was about BPA revoking the contractual transmission rights of several renewable generators in the region (Figure 4).

In response to these complaints from wind generation owners, BPA issued the Oversupply Management Protocol in early 2012 (still pending FERC approval), which implements a least-cost displacement of nonfederal generation within BPA’s territory to identify generators subject to curtailment during periods of excess supply. The methodology also creates a distinction with respect to the treatment of variable and nonvariable energy resources. For example, variable resources like wind would be compensated on a $/MWh basis in the event of curtailment. The basis for compensation would be the audited cost information that would have to be submitted annually by wind generators to BPA. Such cost information for wind could include unbundled renewable energy credits, production tax credits, and contracted value of generation.

In 2012, BPA implemented the oversupply protocol for the first time from April 29 to May 2, for a period of four days. On April 29, BPA curtailed 5,118 MWh and on April 30 it curtailed 6,359 MWh, although—due to the improved protocol design—these curtailments will likely result in payments to wind generators who may have lost contractual payments during the four days.

The Pacific Northwest utilities working together through the Columbia Grid and Northern Tier Transmission Group planning processes have proposed a number of major transmission projects in the region to integrate new resources, improve system reliability, and facilitate economic power transfers.

Figure 5 shows some of the major proposed transmission projects. Several are under development. For example, BPA energized the 500 kV line from John Day to McNary during 2011–2012, and portions of the Cascade Crossing project are under construction. These projects benefit the region by increasing access to significant renewable resources in Canada and in the northwestern states and improve regional transmission reliability. 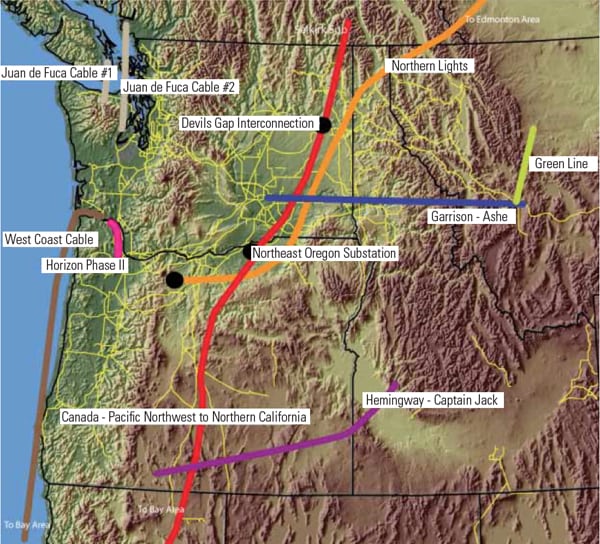 The new transmission lines will also improve BPA’s flexibility in scheduling power generation resources. Some of the proposed long-distance, high-voltage projects may also provide valuable export opportunities for any excess power that is generated in the Northwest from wind and hydroelectric generation facilities.