At the United Nations climate change conference in Copenhagen in 2009, the U.S. committed to cut greenhouse gas (GHG) emissions 17% below 2005 levels by 2020—a target included in cap-and-trade legislation that had passed the House of Representatives earlier that year. With the death of cap and trade in the Senate and the Republican takeover of the House, America’s ability to meet this emission reduction goal has been in doubt. In January of this year, however, U.S. emissions came in 13% below 2005 levels, and power sector emissions were down by more than 17%—achieving the 2020 target eight years early.

The official U.S. GHG emissions inventory is published annually by the Environmental Protection Agency (EPA). In April, EPA released numbers for 2010, showing a 5% decline relative to 2005 levels, but a 3% increase over 2009. This raised concerns among environmentalists that any progress the U.S. had made toward reaching its 2020 emission reduction commitment was just a byproduct of the recession and that U.S. emissions will continue to rise as the economy recovers.

The U.S. energy sector emitted 480 million tons of CO2 during January of this year, down from 552 million tons during the same month in 2005. Of this 72 million ton decline (Figure 1), 34 million tons (blue numbers) came from lower energy demand. 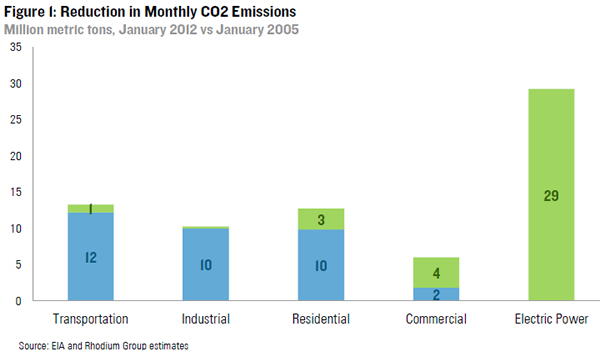 In the residential sector, this is mostly due to warm weather. This January was the fourth warmest on record, which lowered demand for home heating (Figure 2). The industrial sector decline is a hold-over from the recession. Indeed, industrial CO2 emissions rose 5% between January 2010 and January 2012 as industrial output picked up. The drop in transportation energy demand, however, is on a more structural [decline] thanks to high oil prices and new fuel economy regulations. 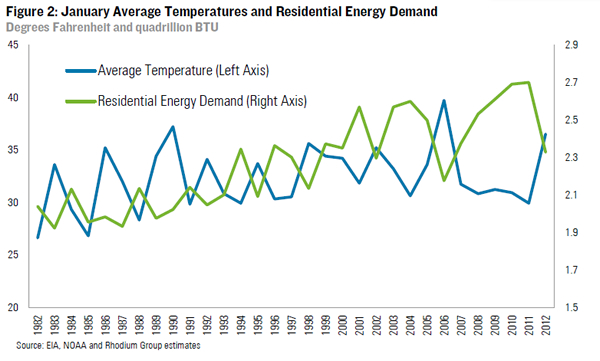 Overall energy demand was down 6% in January relative to 2005 levels and I expect a bit of a rebound in the months ahead. The other 38 million tons of monthly CO2 emission reductions came from fuel switching, however, and that is likely here to stay. Most of this occurred in the power sector, thanks to cheap natural gas and state and federal renewable energy incentives. Coal fueled 38% of U.S. power generation in January of this year, down from 52% during the same period in 2005. Natural gas stole most of that market share, accounting for 27% of generation this January, compared to 15% in 2005 (Figure 3). 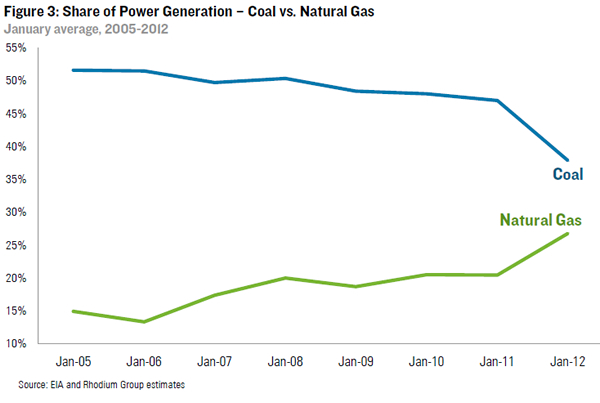 And with oil prices above $100 per barrel, petroleum’s share of power generation has fallen to less than 1%, while wind’s has grown to more than 4% (Figure 4). 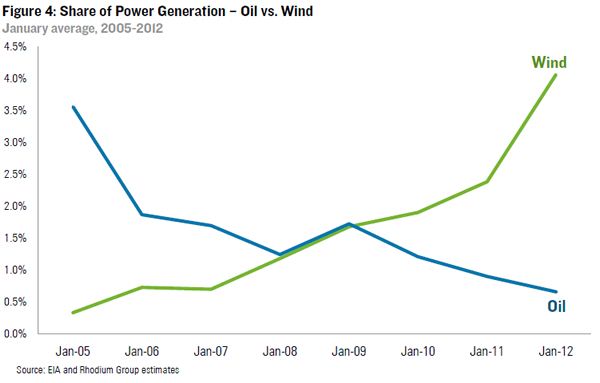 Increased natural gas and wind generation are each responsible for 11-12 million tons of January’s overall emissions decline, with nuclear, biomass and other renewables delivering an additional 5-6 million tons in reductions (Figure 5). 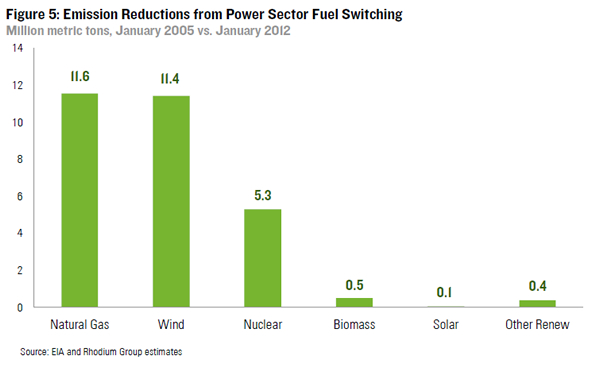 Projected improvements in vehicle and building efficiency will help keep U.S. energy demand in check as the economy recovers. But power sector emissions will need to continue falling for overall CO2 emissions to reach the 17% target by 2020. The rapid growth in wind power generation over the past three years is unlikely to continue absent new policy support from Washington or state governments. Solar power should post some impressive gains in the years ahead, but will make only a limited dent in coal-fired power between now and 2020. Further medium-term electricity sector emission reductions, therefore, depend on a continued switch from coal to natural gas–fired power. Currently forecast natural gas prices combined with EPA air pollution regulations are well positioned to make that happen, allowing the U.S. to achieve its 2020 climate commitments absent cap-and-trade or other economy-wide climate legislation.

The hard part comes after 2020. Stabilizing global concentrations of GHG emissions will require much more than a 17% reduction, and that in turn will require going beyond natural gas-fired power. Nuclear, renewables and carbon capture and sequestration (applied to either coal or natural gas) will need to account for a significantly larger share of U.S. electricity generation. And it will take policy to make that happen.

—Trever Houser is a partner at the Rhodium Group and leads the firm’s energy and natural resources work. This article was originally published on RHG’s web site, and is reprinted here with stylistic edits for this publication.