Nestled among the southern pine forests and red clay soil of suburban Atlanta, there’s little to suggest that the Seminole Road Landfill in DeKalb County, Ga. is on the cusp of something revolutionary. But there’s actually little doubt that a revolution may be taking place in a squat brown building just past the public drop-off site by the main entrance (Figure 1). It’s there that the De Kalb County Sanitation Department is employing its methane emissions not just to generate power but to produce clean, pipeline-quality compressed natural gas (CNG) to power the department’s vehicle fleet. 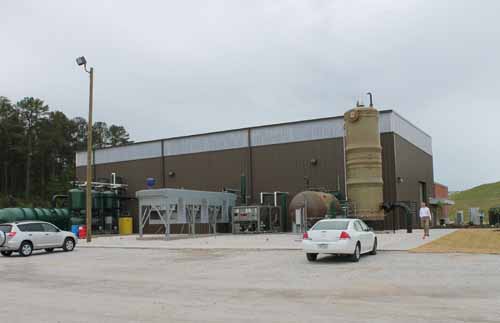 1. The DeKalb County Sanitation Department in Georgia is capturing landfill gas and converting it to compressed natural gas to fuel its vehicle fleet. Source: Tom Overton/POWER

The Seminole Road Landfill opened in 1977 and began flaring its gas emissions in 2000. As a large, mature landfill, the facility generates a substantial amount of landfill gas (LFG), currently more than 2,400 cubic feet per minute (cfm). In an effort to reduce flaring and harness the energy being emitted, the department began using the low-Btu LFG to generate power in 2006. It operates a 3.2-MW green energy facility that uses reciprocating engines to drive the generators, and the electricity is sold to Georgia Power. However, at full power, it consumes only about 1,100 cfm of LFG, leaving a considerable amount still to be flared.

In 2006, the department joined with Waste Management and Mack Truck to study the feasibility of converting the LFG to useable CNG. At the time, there were considerable roadblocks in the way of such a project. The technologies for purifying the LFG were expensive enough that very large volumes (>3,000 cfm) were necessary to make it cost effective. Heavy-duty CNG engines capable of powering a solid waste truck were not yet widely available or cost-effective. And, the cost of diesel fuel was still close enough to CNG that the economics of conversion were questionable. All that was soon to change.

Over the next few years, the price of diesel shot up. In 2008, the department spent more than $8 million on 1.5 million gallons of diesel to fuel its fleet of 300-plus vehicles. At almost the same time, Cummins Engine introduced a line of reliable, economical heavy-duty CNG engines. Advances in gas treatment technologies dramatically reduced the cost of extracting clean methane from LFG (which also contains nitrogen, oxygen, and CO2), to the point that gas volumes as low as 500 cfm were still economical.

In 2009, the department formally applied for, and received, a grant to support construction of a facility to clean and compress the LFG into CNG. Grant funding was provided by the Department of Energy and Clean Cities Atlanta, a public-private coalition that promotes alternative fuel vehicles in the metro Atlanta area. County commissioners voted to move ahead with construction in early 2011, and the facility became operational in April 2012.

The landfill gas is captured by numerous extraction wells spaced across the site (Figure 2). 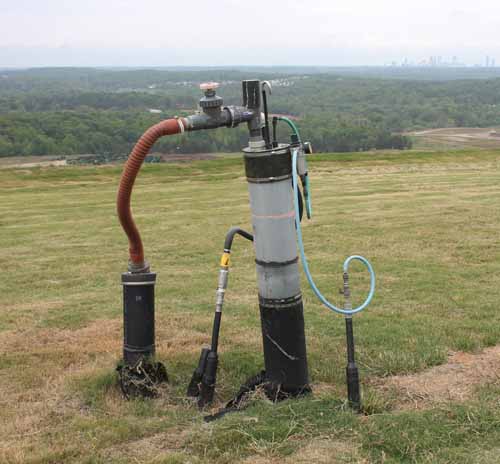 2. This extraction well (the steel tube at right) captures landfill gas and feeds into a network of pipes that deliver it to DeKalb County’s renewable gas facilities. Source: Tom Overton/POWER

The gas is then piped to the LFG-to-power facility with the excess going to the CNG plant. Once there, a series of scrubbers remove hydrogen sulfide (H2S), oxygen, nitrogen, and carbon dioxide to produce pipeline-quality methane (Figure 3). 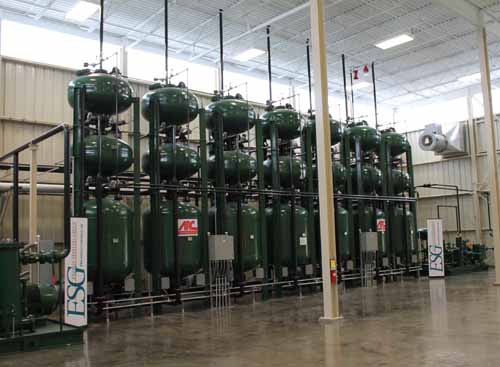 Billy Malone, the county’s director of sanitation, told GAS POWER during a visit to the site in April as part of the LDC Southeast Gas Forum that the facility will initially be able process up to 1,300 cfm of LFG, enough to produce the energy equivalent of more than 2 million gallons of diesel. As the landfill grows, the facility can expand with it, and has the capacity to process to up to 2,600 cfm.

While the LFG-to-energy facility makes efficient use of gas that would have otherwise been flared, its small output has relatively little impact. The CNG facility, on the other hand, is poised to make a substantial impact on the department’s budget. Malone explained that because the department will produce its own vehicle fuel, its long-term fuel costs are now far more predictable. DeKalb County is in the process of converting 70 trash trucks to run on the CNG produced at the facility, and it plans to convert the remainder of its vehicle fleet over the next few years. Fuel savings between now and 2020 are projected to be around $3 million.

In addition, the department will be able to take advantage of Renewable Identification Number (RIN) credits under the Federal Renewable Fuel Standard, because the gas is being used as a transportation fuel. Though the department plants to use the bulk of the CNG to power its vehicles, it expects to sell CNG to the public via a series of planned CNG fueling stations in the Atlanta area.