As I’ve moved in my career from engineering, to law, to publishing, to science, and back to engineering, I’ve long been fascinated by the degree to which professional jargon can both aid and hinder communication. Within a profession, jargon to some extent is efficient, even essential—as long as definitions are clearly agreed upon and the intent is to aid good thinking rather than reduce the need for it.

For example, when power industry professionals use the term smart grid, they generally have a clear idea what they’re talking about, even though those two words encompass a wide range of technologies and practices. Saying "smart grid" is a lot easier than saying, "a system of information collection and processing that enables efficient real-time control of electrical generation and transmission from power plant to consumer." But outside the industry, the understanding of smart grid begins with smart meters and gets very fuzzy from there.

Law has similar problems. Perhaps the biggest is the term hearsay. For most laymen, their understanding of this word—based on various court dramas on television and in the movies—begins and ends with the idea that "hearsay is inadmissible" in court. In fact, as a practical matter most hearsay is admissible as long as it fits within one of numerous exceptions that have developed in the common law over the past few centuries (the Federal Rules of Evidence list more than 20 of them). When a lawyer uses the term hearsay, what she means is "an out of court statement introduced to prove the truth of the matter asserted, and which needs certain indicia of reliability to be admitted." But that’s generally too much for TV.

Science likewise struggles with this problem, especially with science in the media. Numerous examples could be cited, but one should suffice: the oft-repeated assertion that "evolution is just a theory." While true on its face, this statement actually highlights the fact that a "theory" to a scientist is a substantially different thing than what the word theory connotes to a layman.

What does all this have to do with gas? It begins with the meaning of the word reserves.

With the dramatic increase in attention devoted to natural gas production in the U.S., it’s natural that a lot of people want to know how much gas we’ve got. Certain public officials, starting with President Obama, insist we’ve got a 100-year supply. A couple of gas industry leaders boldly assert that we’ve got a 200-year supply. Meanwhile, skeptics respond that, in fact, we’ve got less than a 25-year supply.

The truth is, they’re all partly right and partly wrong. But unraveling the answer to my titular question isn’t simple.

When geologists talk about fossil fuel reserves, they’re using jargon that not everyone appears to understand clearly, or if they do get it, don’t have the context or professional knowledge to apply the data.

Part of the problem is the array of definitions. Petroleum engineers typically break down resource assessments into five categories:

Although these definitions are not terribly challenging, a lot of pundits get lost when trying to apply the various estimates that go with them.

The first thing to understand is that a resource assessment is a moving target. This is especially true on a national scale. Take a look at how much the Energy Information Administration’s (EIA’s) proven dry gas reserves estimates (derived from USGS data) changed over 2004-2009: 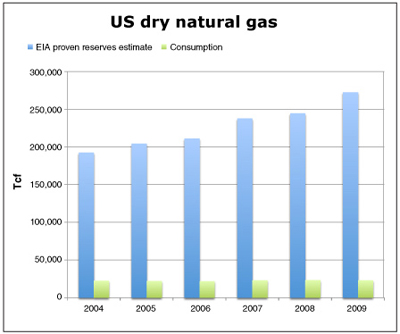 Proven reserves grew an average of 16 Tcf every year, even though the U.S. consumed an average of 22.5 Tcf per year over the same period. This is why one cannot simply take current proven reserves, divide by current consumption, and come up with a meaningful estimate of "how much gas we have left." Yet it is not hard to find examples of energy reporters doing exactly that.

What’s going on here? It’s not just a matter of new gas being discovered. When a known but unexplored gas play is sufficiently mapped, it moves from the unproven portion of technically recoverable reserves to proven reserves.  So even though the U.S. burned 135 Tcf of gas from 2004-2009—a figure that represents more than 70% of the 2004 estimate—almost 80 Tcf was added to proven reserves, both newly discovered gas and known gas that was re-assessed to have a 90+% chance of recovery.

This is a process that goes on continuously as gas plays are discovered, drilled, taken in and out of production, and retired. So while it’s tempting, if one wants to be conservative, to dismiss much of the technically recoverable estimate as speculative, decades of experience have shown that most of it represents gas that will likely be produced at some point.

There’s another point to consider. The technically recoverable estimate is based on current techniques. The importance of this cannot be overemphasized, since it’s a safe bet that gas drillers in 2050 will not still be using 2012 technology. Going back just a decade shows how fast things can change.

Geologists, for example, have long known that shale formations held quantities of natural gas, but very little shale gas was included in USGS estimates until recently because it was considered unrecoverable with existing techniques. In 2002, the USGS estimated that the Marcellus shale formation contained a mere 2 Tcf of technically recoverable gas. Last fall, it upped the estimate to 84 Tcf. The gas had always been there; the only real change was improvements in drilling technology.

So where are we today? Current EIA estimates of technically recoverable gas resources are 2,214 Tcf. If one insists on dividing that by current consumption (22 Tcf in 2011), we get President Obama’s much-bandied-about 100-year figure.

Of course, not all of that gas will be produced. It’s impossible to know where gas prices will go in the future, and the price of gas has a key influence on gas exploration and development. Most indications, and the EIA, suggest gas prices are going to rebound through the rest of this decade—the general consensus is that $2.50/MMBtu gas is just not sustainable. Many factors, particularly liquefied natural gas exports are likely to push the price up.

Too, it’s hard to predict what future gas consumption will look like. All sorts of developments could push it up or down, perhaps substantially.

But it’s also certain that there is a lot of gas out there that is not included in current estimates, either because it hasn’t been discovered yet, or—as in the case of methane hydrates—because commercial methods of recovery have yet to be developed. The DOE, for example, gingerly muses that "the energy content of methane occurring in hydrate form [may exceed] the combined energy content of all other known fossil fuels."

How does all that add up? Basically, you ain’t seen nothing yet.