Northern Italians are enjoying la dolce vita (the sweet life) even more today than they have historically, thanks to the additional electrical capacity provided by the new Livorno Ferraris power plant. Well-received by locals due to its environmentally progressive operations and low-profile appearance, the 800-MW plant is powered by combined-cycle units that burn natural gas. The plant, which generates more than 5 million kWh per year, is part of a comprehensive renewal of the Italian energy sector and will make an important contribution toward ensuring that the country’s power supply is more secure.

Known for its beauty, wine, and artistic legacy from the Renaissance period, Vercelli is a province in northern Italy’s Piedmont region that also is home to the busy industrial centers of Milan and Turin. The new gas-fired Livorno Ferraris power plant is located in the municipality of Livorno Ferraris, which has approximately 4,400 inhabitants. In addition to having many industrial facilities, the region is home to one of the largest rice cultivation areas in Europe. Commissioned in September 2008, the new 800-MW plant, which is nearly 57% efficient, is located in an area with numerous rice fields (Figure 1). 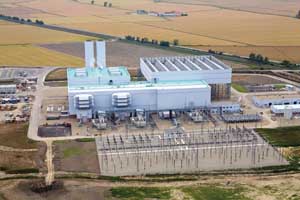 1. A bumper crop. An aerial view of the E.ON combined-cycle plant at Livorno Ferraris, Italy, which is located amid rice fields. The plant, which has an installed capacity of 800 MW and an efficiency of 57%, is capable of providing over a million households with an economical supply of eco-friendly electricity. Courtesy: E.ON

The plant is owned by E.ON Produzione Centrale Livorno Ferraris, a company of which E.ON Italia owns 75% and Berner Kraftwerke FMB (BKW) owns 25%, according to Plant Manager Frank Krüger. The turnkey contractor was the consortium of Siemens AG and Siemens SpA Italy. The environmentally friendly, highly efficient power plant generates approximately 5 TWh (5 million kWh) per year and was installed for roughly €400 million (estimated in July 2009). Approximately 40 jobs have been generated in Livorno Ferraris by the new power plant.

Italy is the fourth-largest power market in Europe, according to sources from E.ON Italia. In recent years, many aging power plants had to be shut down, and Italy has become increasingly dependent on imported power.

With a population currently estimated to be more than 58 million, Italy has a diversified economy with a well-developed industrial north — dominated by private companies — and a less-developed agricultural south.

In order to meet the country’s increasing power requirements and reduce its dependence on imports, the Italian government is now heavily promoting the construction of new power plants, which will help to boost electrical capacity nationwide.

After liberalization of the energy market, German company E.ON decided to invest in Italy and has become the fourth energy producer in the country alongside the major Italian utilities Edison, Enel, and Eni.

The Livorno Ferraris plant was built by Siemens as a turnkey project. Martin Reuss, project manager at Siemens Energy, Germany, explained that the plant is a combined-cycle multishaft reference power plant (SCCF-400F multishaft 2 + 1). 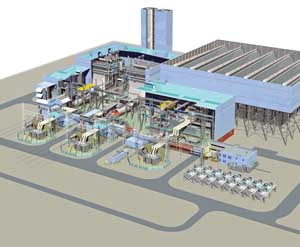 Under the terms of the service contract, Siemens is responsible for providing gas turbine maintenance for up to 12 years, beginning with the first major overhaul of the turbines.

In building the plant, Siemens used the design principle of modularity for flexibility. For example, the use of identical air-cooled generators for the gas and the steam turbines removes the requirement for hydrogen handling and supply. It also improves asset management by minimizing the quantity of spare parts needed.

Siemens also achieved improvements at the Livorno plant through the use of a closed feedback loop related to the power plant design. For example, the company used input from prior projects and past operation and maintenance experience to improve the plant design.

Since the plant went online last year, it has been operated by a team of three persons working in three eight-hour shifts, with one of them always present in the control room, Krüger explained. The Siemens SPPA-T3000 instrumentation and control system has been integrated with a vibration-monitoring system for the balance of plant, allowing remote monitoring of equipment behavior.

By installing advanced technology at the Livorno Ferraris plant, Siemens was able to improve fuel consumption and overall efficiency. Krüger described the benefits of several key equipment components at the plant.

Steam Generator. With the SST5-5000’s special compact design of the HP/IP turbine, hot steam conditions are confined to the middle of the casing, while the glands at the casing ends are in regions of relatively low steam conditions. Temperature decay is much slower when compared to the design with individual turbine casings. Consequently, start-up times for compact turbines are significantly shorter, saving precious fuel.

The main feature of the low-pressure (LP) turbine is the double shell inner casing, which can be displaced axially by means of pushrods. Differential expansion between rotor and casings is thus minimized under all operating conditions, which is essential for high efficiency. This steam turbine combines all the advantages of optimal steam turbine design, including highest efficiency, highest availability, and trouble-free operation at any load required by the system.

Air-cooled Condenser. The gas turbine cycle exhaust heat is used in the HRSG to produce steam for the steam turbine. Siemens’ patented bypass/part stream deaerator is positioned on top of one HRSG and ensures quick deaeration of the condensate during start-up or low-load operation of the water steam cycle. The HRSGs provided are simple conversion natural-circulation drum-type generators and generate steam in high-, intermediate-, and low-pressure sections.

A condensate preheater is integrated into the HRSG. By using the exhaust gas energy to preheat the condensate before it passes toward the feedwater pump and into the LP system, this arrangement enables higher efficiencies for the combined-cycle power plant.

Digital Control System. To meet the technical, economic, and environmental needs of modern power plants, Siemens developed its SPPA-T3000 digital control system, with open standards – based hardware and software. The structure and redundant processors of SPPA-T3000 ensure maximum availability and reliability. The SPPA-T3000 instrumentation and control system is used for almost the entire power plant — turbines, steam generator, and main systems — and is supporting excellence in operation at Livorno Ferraris. (More details on the design and capabilities of the SPPA-T3000 are available in "Upgraded Control System Adds to Merchant Plant’s Bottom Line," POWER, January 2009.)

The state-of-the-art, single-shaft SGT5-4000F gas turbine is of single-casing design. The combustion system combines all the advantages of optimal combustion, including low NOx and CO emissions, high operating flexibility, and a compact design with good accessibility, according to Krüger.

Natural gas from the pipeline is coming from different sources, including Russia, Algeria, and the Netherlands. Due to limited flow on the distribution line, the natural gas can change suddenly in composition and calorific value. This variability imposes the need for very quick response from the turbine fuel system controls to maintain the required electricity generation.

In order to maintain turbine efficiency as high as possible, the plant uses a compressor washing system. To accommodate rapidly changing operating conditions, this system can be operated online and off-line.

Several technical solutions at Livorno Ferraris are unusual for a combined-cycle power plant but had to be adopted to comply with authorization granted by local authorities in charge of environment protection, Krüger explained.

"Because the soil at the site was full of water [and did not have the required compressive strength for standard concrete pad foundations], it was necessary to rest the foundations on piles," he said. "Standard concrete piles were not allowed because they would disturb the flow of underground waters. The piling was constructed according to the Vibro Column Technique by the Italian subsidiary of a German company (one of the two suppliers in Europe). A 1-meter-high concrete ‘head’ was plugged into the soil, followed by a column of compacted gravel, which allows water to go through it with minimum impact on the original water flow."

Although surface water is present in great quantities at the plant site, it could be not used to as cooling water due to the need to prevent any possible contamination of the water that could affect nearby rice cultivation. Because a standard water-cooled steam condenser was not allowed, Siemens had to install an air-cooled steam condenser. This was unusual, considering that air-cooled technology is widely used by power plants located in desert environments but is not commonly used when water is available because of the large size and high cost of such equipment.

The plant building, which contains all three turbogenerator sets, the two HRSGs, and offices, had to be no more than 32 meters (m) in height in order to meet environmental standards regarding visibility. This created a challenge, Krüger explained, as the typical height of HRSGs is approximately 38 m to 40 m. For this project, Siemens had to modify the design so that HRSG equipment could fit inside the main building.

The color of the building and the square stacks had to be such that they would have less impact on the environment under all weather conditions. Sample panels were exposed to different lighting conditions — from sunshine to fog — before permission was granted for installation.

Usually, passersby can detect a power plant site by the steel pylons supporting the high-tension cables that connect it to the grid. But the utility did not want this standard, high-visibility profile. Therefore, the contractor had to connect the plant to the grid by laying underground high-voltage (400 kV) cable for 1.5 km to link it to the national grid at the Terna substation (Figure 3). 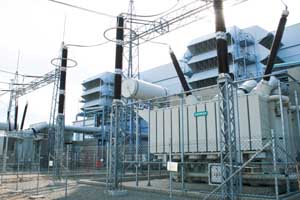 3. Stepping up voltage. These are the medium-voltage transformers installed at the Livorno Ferraris power plant. During construction, Siemens had to lay 1.5 kilometers of underground 400-kV high-voltage cable from the plant to the Terna substation in order to connect the plant to the Italian national grid. Courtesy: E.ON

The entire plant is surrounded by a tree fence to shelter it. Although the recently planted trees haven’t reached their mature heights, the Livorno Ferraris power plant is more attractive than most and looks more like an office complex than an industrial plant (Figure 4). European engineering and design have perfectly balanced the need for reliable electricity, low environmental impact, and a scenic countryside. 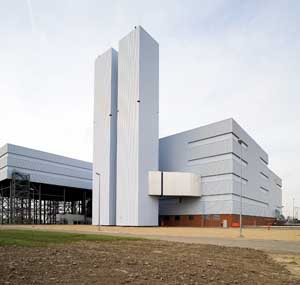 4. Fashionably functional. In the land famous for Ferrari cars, Armani suits, and other symbols of sophisticated style, it is not surprising that the Livorno Ferraris power plant building is an example of attractive, yet functional architectural design. Courtesy: E.ON