Friends, colleagues, and co-workers uniformly called him "The Boss." His life was a story of failure after failure. His greatest fame was his greatest failure—a journey begun nearly 100 years ago, in 1914, to cross the desolate Antarctic continent by land. His doughty ship Endurance became trapped by the encroaching ice in the Weddell Sea north of the continent, isolating Sir Ernest Shackleton and his 27-man crew.

Stuck in the ice for the winter, Shackleton kept his crew intact and well on board the ice-bound Endurance. When spring arrived in November 1915, the moving ice began crushing Endurance, and Shackleton and his men abandoned ship. The party camped on a moving ice floe for the next four months, finally boarding the three lifeboats and making a perilous journey to Elephant Island.

Trapped on the remote island, Shackleton refurbished and readied the sturdiest of the life boats, the James Caird, a 23-foot single-masted craft, and on April 24, 1916, with five crewmates, set off on an 800-mile, open-boat quest to find a whaling station on South Georgia Island. The ship had only four days with sufficient sun for navigation, but on May 8 the James Caird made land in King Hakkon Bay on the forbidding west coast of the sub-Antarctic island.

After a few days of rest in a shallow cave on shore, Shackleton and two members of the crew set off across the island, seeking the Norwegian whaling station of Stromness. After 36 hours of hiking across the glacier-clad, storm-washed island, Shackleton and his two companions staggered into the whaling station. He had been presumed dead, lost with the entire crew of Endurance.

Transferred to the larger station at Grytviken, Shackleton made three abortive attempts to return to Elephant Island for his crew. On the fourth try, he succeeded. The men had survived, and Shackleton was able to rescue all 21 crewmates. It was an astonishing display of leadership, as Shackleton put the needs of his fellow crew members above all else and saw to their rescue. Stranded on Elephant Island (named for the elephant seals that haul out to breed there, and which provided food for the stranded whalers), the men never lost their faith in their leader.

Shackleton returned to South Georgia in 1922, hoping to mount another attempt to conquer Antarctica’s forbidding landscape. But he was struck down by a heart attack and died on the island that is a gateway to the continent (see figure). 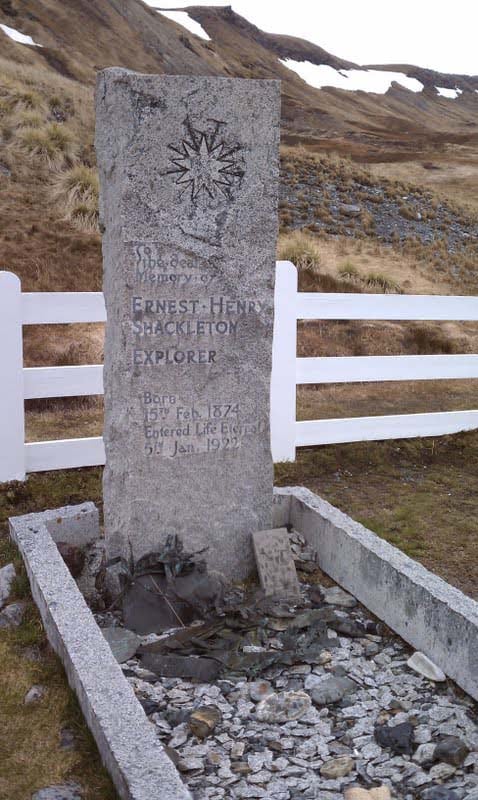 He’s buried at a modest cemetery in Grytviken, among European and American whalers. All of the graves but one point to civilization. Shackleton’s grave points south to the Antarctica he loved and repeatedly failed to traverse. His headstone contains these words from the English poet Robert Browning: "I hold that a man should strive to the uttermost for his life’s set prize."

In these days when both scholars and charlatans claim to understand the meaning of leadership, and facile and anodyne books, seminars, and courses of study yield major financial returns to their purveyors, it’s worthwhile to consider Sir Ernest Shackleton and the meaning of true leadership.

English geologist Sir Raymond Priestley was an Antarctic explorer who trekked and competed with Robert Falcon Scott (who lost his life returning from the South Pole), Roald Amundsen—who won the race to the pole, and Shackleton, who never saw the pole. Priestley summed up the importance of true leadership: "For scientific leadership, give me Scott; for swift and efficient travel, Amundsen; but when you are in a hopeless situation, when there seems to be no way out, get on your knees and pray for Shackleton."