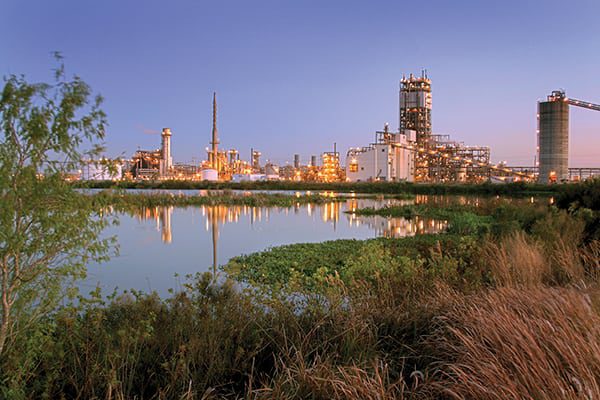 It’s not often that a power plant upgrade improves both the environment and the bottom line. Needing to come up with a new source of cooling water for Polk Power Station, and faced with mostly expensive, environmentally questionable options, Tampa Electric came up with a solution that both secured the plant’s water supply for the future and provided significant benefits to the local environment.

To casual visitors, central Florida would seem to be an odd place to be experiencing a water crisis. With its frequent rains, humid climate, abundant springs and lakes, and tourist attractions that make profligate use of water, the region would appear blessed with resources.

But, in fact, central Florida has grown increasingly water-stressed over the past few decades.

Florida’s rapidly growing population has meant demand on its water resources has frequently exceeded the supply. Those resources are also threatened by development in neighboring Georgia, because the two states share the same source of groundwater, the Floridan aquifer. In the early 1990s, groundwater withdrawals were so great that in certain areas of central Florida, the aquifer had been drawn down more than 50 feet. One result was saltwater intrusion into the aquifer along the coast, particularly in Manatee County along the southern end of Tampa Bay. When this happens, it makes groundwater more expensive to use, and if saltwater intrusion is severe enough, can force the closure of contaminated wells.

In response, the state directed the local water management districts to adopt strategies that would protect its water resources. In 1992, the Southwest Florida Water Management District (SWFWMD) designated the Southern Water Use Caution Area (SWUCA) covering all or part of eight counties in southwest Florida. The current SWUCA strategy is to manage river flows and groundwater withdrawals in the area to limit saltwater intrusion and ensure water supply needs can be met.

While water use is an issue that cuts across all sectors of a community, it has special implications for power generation. This is the story of how one power plant found a way to substantially reduce its impact on local water supplies while at the same time helping reduce environmental impacts on a major body of water.

Tampa Electric Co., a subsidiary of TECO Energy, traces its roots to 1899 and currently serves more than 700,000 customers in the Tampa Bay area as a regulated utility. Its four-plant fleet, a mix of coal- and gas-fired generation, comprises about 4,700 MW of capacity.

Tampa Electric’s Polk Power Station, situated on 4,300 acres that were originally part of an old phosphate mine about 40 miles southeast of Tampa, is located in one of the most water-stressed areas of the SWUCA. Unit 1 is a 260-MW, 2 x 1 integrated gasification combined cycle (IGCC) plant. It was the first greenfield IGCC facility built in the U.S. and began operations in 1996. Since then, four more units have come online at Polk. Units 2 and 3 (180-MW dual-fuel combustion turbines) began operations in 2000 and 2002, while Units 4 and 5 (160-MW gas turbines), started up in 2007.

Water for cooling is drawn from a large reservoir adjacent to the plant that was built using mine cuts from the phosphate mine. Because plant effluent is ultimately discharged into the area watershed, the reservoir can require as much as 3 million gallons of water for makeup every day, which needs to be replenished with groundwater. That was a significant drain on the area’s resources by itself, but Tampa Electric’s forward planning suggested new capacity would be needed at Polk in the future. That would mean more cooling water would be needed, but where that water would come from was a significant obstacle.

■ Petition SWFWMD to increase groundwater withdrawals. Although this would have been the most cost-effective solution if it were granted—which was by no means guaranteed—it would have further stressed area resources, making the plant a “poor neighbor” for others in Tampa Electric’s service area.

■ Convert to air-cooled condensers. In addition to being expensive, the technology is poorly suited to Florida’s hot, humid, climate, meaning plant efficiency would take a big hit.

■ Close off the cooling water discharge and instead recirculate the water in the reservoir. Not only was this was cost prohibitive, stopping the discharge would have affected the minimum-flow levels of a nearby creek, essentially exchanging one environmental impact for another.

■ Buy land with unused water credits. This would have been the simplest approach but also the most expensive one.

■ Switch to cooling with reclaimed water. This would be technically challenging but potentially had the greatest environmental benefits.

A number of factors suggested the last option was the best one. But a source of sufficient wastewater needed to be found.

As it happened, there was an ample source only a few miles to the north. And making use of it would address another nagging environmental problem for the area.

Polk County and the cities of Lakeland and Mulberry have been treating their wastewater and using it for irrigation for many years. However, despite the various beneficial uses, the treatment plant produced significantly more water than the municipalities could use. Together, they were discharging about 9 million gallons of wastewater into the Alafia River every day.

That treated wastewater ultimately wound up in Tampa and Hillsborough bays. But treated or not, the wastewater carried with it a lot of nitrogen and other nutrients, contributing to elevated nutrient levels in the bays. When nitrogen and phosphate levels are too high, it can cause algae blooms and inhibit the growth of sea grasses, fish, mollusks, and other aquatic life. Keeping the bays’ nutrient inflow under control has been a major goal of environmental agencies in the area. Though significant progress has been made since nutrient levels became a serious problem in the 1960s, more work remains to be done to keep the bays healthy.

In 2008, Tampa Electric began working with Lakeland and SWFWMD on a method to bring that excess wastewater to Polk Power Station. In March of 2009, Lakeland, Tampa Electric, and SWFWMD reached an agreement under which the city would supply Polk with up to 5 million gallons of wastewater per day under a 30-year water supply agreement—at no cost for the first 20 years.

Because the project would reduce overall groundwater withdrawals, SWFWMD agreed to contribute approximately $45 million to the total project cost of $120 million. Innovative water projects are nothing new to SWFWMD, which is a national leader in fostering reclaimed water use: The area recycles an amazing 50% of its wastewater, compared to just 7% nationwide. SWFWMD had partnered on power plant cooling projects in the past, but this would be the largest one ever. The project also received an additional $2.5 million from the state’s West-Central Florida Water Restoration Action Plan fund.

As envisioned, the project would address several objectives at once:

■ The city of Lakeland would get a 10-year permit for additional groundwater withdrawals, at no cost to its taxpayers.

To get the wastewater from Lakeland’s Wetland Treatment System to Polk Power Station, Tampa Electric installed a 15-mile plastic pipeline and a reclaimed water pumping station (Figure 1). Construction of the pipeline took about 18 months.

The utility also built a water purification plant at Polk Power Station, because the treated wastewater required further purification before it could be used for plant cooling (Figure 2).

After pilot testing to determine the best and most cost-effective approach, Tampa Electric settled on a three-stage treatment process:

■ High-rate settling and clarification, to remove solids such as algae and dirt.

■ Reverse osmosis (RO), which removes dissolved impurities such as salt and other minerals (Figure 3).

The clarification process produces a mineral-rich sludge that is currently dried and buried in a landfill, though Tampa Electric is looking for buyers, as the sludge has agricultural value.

The RO process, meanwhile, produces two water streams. The first, purified stream goes into the reservoir and is used for plant cooling. As it’s been purified almost to potable water standards, it can then be discharged safely into the area watershed without affecting nutrient levels.

The waste stream, concentrated with brine and impurities, has to be disposed. After considering the various options, Tampa Electric opted for deep-injection wells.

Two state-of-the-art wells were drilled 8,000 feet underground to allow for disposal (Figure 4). At the bottom of the wells, the disposal stream is released into a naturally existing briny aquifer that begins around 4,200 feet down. Between that point and the surface is a 1,000-foot-thick layer of limestone that keeps the disposal stream from entering the Floridan aquifer, which is much closer to the surface (its deepest portions at the plant site are around 2,800 feet below sea level, and the deepest well in the area is around 900 feet). While drilling the wells, Tampa Electric was able to perform additional research on the limestone layer that was useful for local geologists.

The $120 million system came online in March 2015 after five years of construction, with the parties very pleased with the results. All of Lakeland’s treated wastewater is now seeing beneficial reuses instead of flowing into Tampa Bay.

“This public-private partnership is on the leading edge of innovative water use,” Tampa Electric President Gordon Gillette said. “It has far-reaching water-resource benefits that will be seen in Tampa Bay for multiple generations.”

“The city of Lakeland considers this project to be a unique endeavor between three atypical partners,” said Robert Conner, director of Lakeland Water Utilities. “From the very beginning, we anticipated it was a ‘win’ for all three of us. It has worked out to exceed even those very positive expectations.”

A brief video about the project can be viewed on YouTube at https://youtu.be/mtsVb36MkC0.

Looking to the Future

As impressive as the system is, Tampa Electric has plans to take it even further. Phase II, which will expand the purification plant and connect to wastewater streams from Polk County and the city of Mulberry, is under water-use contract, and engineering plans are being developed. The expansion is scheduled to begin operations in 2017. Once expanded, the system will be able to handle up to 17 million gallons of wastewater per day.

That additional water will be necessary because Polk Power Station is in the process of adding combined cycle capacity to Units 2 through 5. The new generation, which will boost total capacity to 1,420 MW, is expected to come online that same year.

The utility is also looking ahead to possible carbon capture technology, should it ever be needed at Polk. The injection wells could potentially be used for carbon sequestration with some modifications. Tampa Electric worked with a team of experts at the University of South Florida to evaluate that option, though it ultimately decided not to include it at this time because of long-term funding issues.

Tampa Electric has shared the details of this project at several industry conferences to help educate both the power sector and the wastewater treatment industry on innovative disposal methods. The project was honored by the Edison Electric Institute earlier this year with one of its three Edison Awards for 2015.

For demonstrating creative thinking and crafting a solution that met its needs as well as those of the surrounding communities, POWER is proud to honor Tampa Electric and the Polk Power Station with its 2015 Water Award. ■