Sometimes, circumstances have a way of developing in such an unexpectedly serendipitous way that they practically force one to take notice. So it is with Cuba and its power sector.

It all started with a letter to the POWER editorial team from Cuba that I received in mid-December. It had been written in October and was forwarded by our corporate office. The very next week, on Dec. 17, President Obama announced the administration’s changes in policy toward Cuba. After sharing news of the letter with Contributing Editor Ken Maize, I learned that he was headed to Cuba in January for a cultural exchange trip. (See “Cuban Revolucion Energetica?” at powermag.com/blog.) Then, in mid-January, I received another letter from Cuba—this time via email. (Both the letter and the email were from the same person, to whom I have replied.)

Several things made these developments interesting. First, the stamp on the letter bore a picture of a lizard not unlike those in my backyard. It was also the first letter to the editor I’ve seen in hard copy. Usually, if we get something via the mail service, it’s marketing materials or an unsolicited article. (Note that both hit the recycle bin because we’re a totally digital organization.) As for the messages, both were very complimentary about a wide range of work written and published by POWER and its editors. Usually, when we get comments about content, it’s either strongly for or against a single article and is typically fueled by the writer’s political or economic views. But this author noted that his team of professionals “discuss almost all the articles.” 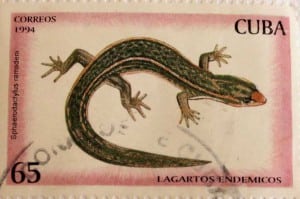 I appreciated the messages from Cuba because it’s gratifying to know that one’s work is useful, but I also learned something about Cuba’s power sector and the dedicated people working in it, and that prompted me to research further.

Most readers are familiar with Germany’s Energiewende, or energy transition; fewer are aware that Cuba instituted a plan in 2005 that goes further, in some areas, according to German consultant and author Dieter Seifried. One example: A complete switch from incandescent to compact fluorescent lamps was made in Cuba five years earlier than in Germany and the rest of the European Union. This revolution entails efficiency measures, adding distributed generation (DG), improving transmission and distribution (T&D), developing renewable energy as well as domestic fossil fuel resources, and increasing both international cooperation and public awareness of energy issues. There’s still a long way to go with this revolution, as Ken’s post notes.

According to the International Energy Association, in 2012 the majority of Cuba’s 18,432 GWh for its roughly 11.3 million citizens was generated by oil (15,652 GWh), with gas supplying 2,082 GWh. As for renewables, biofuels supplied 555 GWh, hydro 111 GWh, wind 17 GWh, and solar photovoltaics 5 GWh. The U.S. Energy Information Administration (EIA) estimates that 2012 installed capacity was 6.24 GW. The EIA notes that, “In an effort to diversify its energy portfolio, Cuba has set a goal of producing 24% of its electricity from renewable sources by 2030. To meet this goal, Unión Eléctrica, the state-owned power company, is planning 13 wind projects with a total capacity of 633 MW. In addition, Cuba plans to add 755 MW of biomass-fired capacity, 700 MW of solar capacity, and 56 MW of hydroelectric power.”

Multiple sources note that the island nation has a high proportion of mostly diesel-fueled distributed generation. The DG emphasis makes sense for a largely rural, sparsely populated, elongated island nation that covers a relatively large area. Cuba is the largest Caribbean island—slightly smaller than the state of Pennsylvania.

The sudden loss of economic support resulting from the collapse of the Soviet Union was another driver of DG, according to a 2008 article by Mario Alberto Arrastía Avila, energy specialist at Cuba’s Centre of Information Management and Energy Development. Oil consumption fell 20% in two years, Avila notes, affecting all sectors and making 16-hour blackouts common. Hurricanes in 2004 and 2005 made matters worse, particularly for the T&D system. Emergency generators, most capable of burning diesel or fuel oil, were the fastest way to restore service in many areas and to ensure less-widespread loss of power in the event of future hurricanes. DG accounted for as much as 40% of total generation by 2009, according to one source.

More recently, renewable DG is being pursued. The email I received mentioned a new five-year program to develop solar and wind projects. Today, the writer said, almost all rural schools are equipped with solar panels to power everything from TVs and computers to lamps, water pumps, and air conditioners; this DG model is being expanded to other sectors. Though the country still relies on fossil fuels for the vast majority of generation, it is betting, he said, on a future “that will rely on diversity and efficiency.” And although he and his group are in the business of providing technical services to existing fossil plants, they are fully supportive of renewables.

POWER covers the global power industry, even though the majority of our audience is in North America, because power is of global concern. That is more true today than ever before, as all nations look for ways to develop and use energy affordably but in more environmentally benign ways. Here’s hoping we all can continue to learn from each other, even when the politicians and leaders of our many different countries disagree. ■