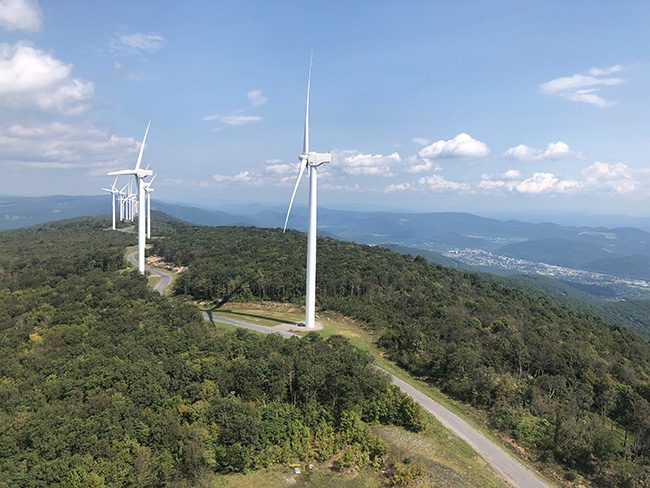 Clearway Energy Group reaffirmed its commitment to renewable energy, and to its support of West Virginia’s push for cleaner energy, with a repowering of the Pinnacle Wind Farm. The project extends the wind farm’s lifetime, creates jobs, and provides more tax revenue and funding for local community groups.

Repowering of power generation facilities can provide an aging plant with a new lease on life. But there’s more to it than just extending an installation’s operational lifecycle; repowering can increase power generation capacity, the efficiency of electricity output, and can enable an existing facility to take advantage of new technologies, without the need to construct an entirely new power plant. Such an effort also enables a power plant to continue to benefit a community by creating jobs, bringing in tax revenue and other funds—and of course providing even more needed electricity.

Clearway Energy Group, headquartered in San Francisco, California, saw that potential at the company’s Pinnacle Wind Farm in Keyser, West Virginia. Pinnacle, a 54-MW wind farm that came online in 2012, was repowered over several months in 2021. It was Clearway’s first repowering in West Virginia—the company has more than 580 MW of wind farm capacity in its portfolio and project pipeline in the state—and its fourth overall repowering effort across its power generation fleet.

The Pinnacle repowering, recipient of POWER’s Reinvention Award this year, is an important project that reaffirms Clearway’s commitment to renewable energy, and its support of bringing cleaner energy to West Virginia, a state long dependent on coal mining, and oil and gas production. Clearway Energy Group, along with its public affiliate Clearway Energy Inc., owns and operates more than 8 GW of both renewable and natural gas-fired power generation in its fleet. That total includes about 5.6 GW of wind, solar, and energy storage assets.

Clearway’s work has caught the eye of global energy majors; TotalEnergies, the French oil and gas group that is moving quickly to grow its renewable energy business, in late May announced it had an agreement, along with Global Infrastructure Partners, to acquire a 50% stake in Clearway. TotalEnergies said the deal “will contribute to enhance Clearway’s growth prospects” in the U.S., and it shows how global energy players are embracing the growth of the nation’s renewable energy sector.

Clearway said it invested nearly $460 million in West Virginia in 2021, including its investment in the Pinnacle project. The repowering created about 50 full-time construction jobs under labor agreements with local construction trade unions.

The project upgraded Pinnacle, improved the plant’s efficiency, and also brought more reliability to the local electric grid. Wind power supplies about 3% of West Virginia’s total electricity generation, a level that has continued to grow over the past 20 years. U.S. Department of Energy (DOE) data show wind power in West Virginia produced 244 GWh of electricity in March of this year, the most output ever in a single month in the state since the start of DOE record-keeping in 2002.

The repowering (Figure 1) of Pinnacle involved removal of the installation’s original 23 turbines. Foundations of the wind farm’s towers were strengthened, and then new towers were erected. New nacelles—each weighing 82 tons—and turbine blades also were installed. The total number of wind turbines didn’t change, but the new equipment improves the wind farm’s performance.

Daniel Keyes, senior manager for Business Development for Clearway, told POWER efficiency upgrades were among several reasons the company wanted to repower the Pinnacle installation. “Improvements in wind turbine technology—larger blades at higher altitudes—mean that the repowered plant could more efficiently harness the wind,” said Keyes, who also pointed to the fact “the new plant captures 16% more power because of these improvements.” That uptick in energy output was accomplished without the need for upgrades to the project’s transmission system.

Keyes also said, “Clearway had access to turbines under favorable tax conditions,” specifically the federal production tax credit, or PTC, an incentive that provides financial support for the development of renewable energy projects.

Pinnacle’s wind turbines are from Siemens Gamesa Renewable Energy. Keyes explained that “the turbines are the S108, 2.3-MW model with a 1.5% power boost to 2.3345 MW per turbine.” The height of each tower is 82 meters, the diameter of each rotor is 108 meters, and each rotor weighs 60 tons. Each turbine blade is 52.6 meters in length.

Keyes said Clearway considered several factors when originally siting the Pinnacle farm. He said there was a “good resource—strong and consistent winds on the Allegheny Front,” an area that covers eastern West Virginia, southern Pennsylvania, western Maryland, and western Virginia in the Allegheny Mountains, and is home to several wind power installations.

Impacts of the new construction were minimal, since the repowering occurred within the Pinnacle farm’s existing footprint of about 2,100 acres. As each old turbine was decommissioned, a focused clean-up effort helped remove any remaining debris from the site.

Clearway said it estimates about 85% of the materials (by weight) from the decommissioned turbines were repurposed or recycled, which yielded about 7,400 tons of steel and 495 tons of fiberglass. Additionally, about 18,500 gallons of combined hydraulic fluid and coolant were recovered. Large amounts of aluminum and cabling also were recovered from each turbine.

Some of the turbine components, including three blades and nine generators, were repurposed for use at other wind farms. The scrap metal products were taken to recycling facilities, mostly located in West Virginia, Virginia, and Pennsylvania. The fiberglass blades were recycled by Georgia-based FibREtech, a company that specializes in fiberglass/carbon fiber waste reclamation, recycling, and transformation services.

Keyes said the repowering of Pinnacle did not impact its contracts with groups buying power from the wind farm. “Clearway had existing contracts with our customers,” Keyes said. “Both customers agreed to extend their commitments with the repowering, including the Maryland Department of General Services and another academic institution.”

Valerie Wooley, vice president of Origination at Clearway, in a statement following the repowering said, “This significant investment in West Virginia’s energy economy would not be possible without the continued strong and innovative commitment from our customers, including the Maryland Department of General Services. Their ongoing partnership helps us significantly boost Pinnacle’s efficiency, bolster the reliability of the electric grid, and continues their ‘first mover’ legacy of leadership in securing renewable energy within the PJM market.”

The repowering also provided Clearway with the opportunity to extend its Pinnacle Community Benefit Fund, which distributes $20,000 annually to the local community, and has awarded more than $250,000 since Pinnacle began operations in 2012. The wind farm also pays $500,000 in annual property taxes to support the community, and expects to contribute $3.7 million in state business and occupancy taxes over its extended operating life.

Clearway’s commitment to West Virginia continues; the company in February of this year announced completion of the 115-MW Black Rock wind farm, just months after completing the Pinnacle repowering. The Black Rock project, which spans Grant and Mineral counties and which Clearway said will increase West Virginia’s wind energy output by 15%, is contracted under long-term power purchase agreements with Toyota Motor North America and AEP Energy Partners, a wholly-owned subsidiary of American Electric Power. Both those groups are major employers in West Virginia.

“We value partners like Clearway that share our vision for improving lives within communities, including those where our team members work and live, like West Virginia,” said Chris Reynolds, chief administrative officer for Toyota Motor North America. “Toyota is making significant investments in and aggressively pursuing environmental technologies to achieve our goal of carbon neutrality at our manufacturing facilities by 2035.”

Clearway said the Black Rock project created more than 200 union jobs during construction and nearly a dozen permanent operations jobs, including through a partnership with Eastern West Virginia Community and Technical College to hire program graduates and workers displaced from the coal industry. Black Rock joins both Pinnacle and Clearway’s Mount Storm projects in Grant and Mineral counties. Mount Storm, which has operated since 2008, is a 264-MW installation with 132 Gamesa G80 wind turbines.