Enbridge Inc., a Canadian pipeline and energy distribution and services company, and FuelCell Energy Inc. opened what they say is the "world’s first" direct fuel cell – energy recovery generation (DFC-ERG) power plant in Toronto, Ontario, this October. The innovative 2.2-MW project harvests high pressure that is used to channel natural gas over long distances through pipelines and a 1.2-MW fuel cell power conditioning system to produce power. It is the result of a C$10 million project, which had received support from federal and provincial governments, the companies said.

Before natural gas can be safely distributed to homes and businesses, the high pressure at which it travels over long distances must be reduced; hundreds of pressure-reducing stations exist across Ontario. Normally, pressure is dropped by squeezing the gas through a valve. Since this process causes the gas to cool, it is usually preheated using gas-fired boilers to maintain reliable deliveries of gas to consumers. Instead of using a valve, which wastes the pressure energy, the DFC-ERG power plant directs the high-pressure gas through a turbo expander. This harvests the waste energy for power generation, operating much like a wind or water turbine (Figure 5). 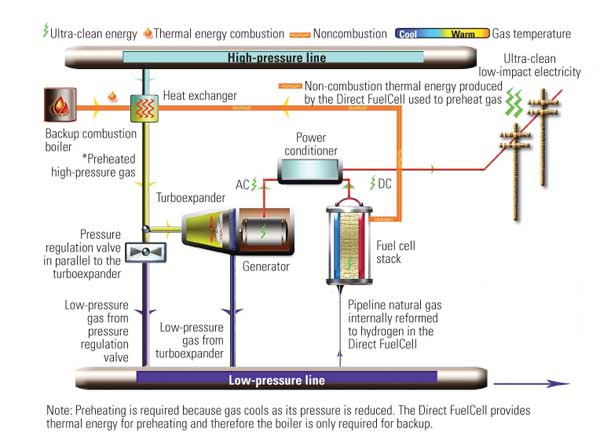 5. All in the pipeline. A distributed generation power plant opened this October in Toronto, Ontario, that harvests high pressure from natural gas pipelines using a turbo expander and uses it to turn a turbine. A 1.2-MW fuel cell supplements the power produced by the power plant owned by Enbridge Inc. and FuelCell Energy Inc. Courtesy: Enbridge Inc.

The integration of the fuel cell, created by Satcon Technology Corp., more than doubles the amount of low-impact electricity that is delivered to the grid, and the noncombustion heat from the fuel cell eliminates the need for the boiler and its emissions.

According to Enbridge and FuelCell, this distributed generation (DG) technology obtains its high efficiencies by operating 24 hours a day as a combined heat and power plant, but it is unique in that it converts more than 60% of the input energy into high-value electricity — almost double the fuel-to-electricity conversion of many DG technologies. The company also said that because natural gas pressure-reducing stations are inside, or near, urban centers, the power is generated where it is needed most, which reduces electric grid system losses.

Enbridge and FuelCell Energy Inc., which manufactures fuel cell power plants for electric power generation, are promoting the technology to other gas utilities. The companies said that North America presents 250 MW to 300 MW of opportunities for DFC-ERG systems.