Each day, American Ref-Fuel’s Massachusetts facility converts some 3,500 tons of municipal waste to electricity and transmits it to the regional grid. Three boilers and two turbines operate around the clock to make the conversion, and a distributed control system (DCS) maximizes the efficiency of the process. If one turbine goes off-line, for example, the DCS takes steps to account for that. But if the DCS itself has problems, the entire plant grinds to a halt. That can cause a buildup of waste and a regional supply shortfall—not to mention considerable time and cost to diagnose the problem and rectify it.

Beginning in the late 1980s, the waste-to-energy plant relied on a Westinghouse WDPF distributed control system. But as that system began to show its age, DCS faults and related downtime began to rise. This set plant management on the hunt for a modern control system.

American Ref-Fuel’s key selection criterion for the new system was minimum plant downtime to install it. "We wanted to limit downtime to less than 24 hours," explained Jim Haselbauer, a controls engineer with the company. The challenge became clear when the vendors of all DCS solutions initially evaluated said replacing the system would require the plant to replace all existing wiring and racks—which would take a week or longer.

The I/A Series DCS from Invensys Process Systems’ Foxboro division (Foxboro, Mass.) is known both for its reliability and its ability to handle complex, hazardous, and nonstop processing applications. But what was especially appealing to American Ref-Fuel was the ease with which its Westinghouse WDPF could be migrated to an I/A Series DCS.

The I/O modules of Foxboro’s standard I/A Series are manufactured to be one-for-one, form-fit replacements for those of the Westinghouse WDPF. This allows reuse of existing Westinghouse cabinets, I/O nest termination assemblies, power supplies, and field wiring with no modification. As American Ref-Fuel was delighted to learn, it could indeed replace its DCS with less than 24 hours of plant downtime—and at about half the cost that other vendors were quoting.

By keeping existing wiring and chassis racks, American Ref-Fuel avoided not only the capital cost of new equipment but also the considerable costs of the labor needed to replace old electronic infrastructure with new. "Eliminating those labor costs cut the cost of moving to a new system in half," Haselbauer said.

Before commissioning the new I/A Series system, American Ref-Fuel trained its operators on it and physically prepared the plant to avoid any unnecessary downtime. The new control system’s workstations, controllers, and networking were installed alongside those of the Westinghouse WDPF while it was still on the job. On the day of the switchover, the process was shut down and the new I/O modules were swapped in (Figure 8). 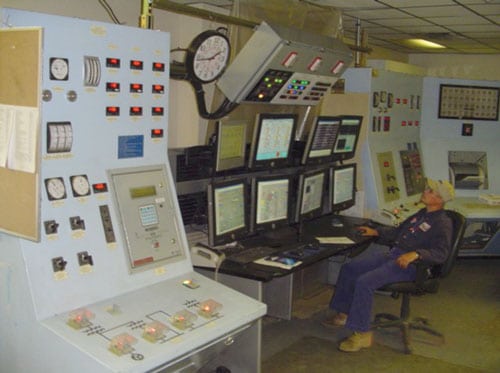 "The modules went in very quickly," said Haselbauer. "It took only 2 hours to install the I/O modules in each cabinet. We spent the rest of the ‘down day’ testing the new system to make sure all of our process readings were correct. From beginning to end, the plant was down for only 18 hours."

With the new DCS up and running, American Ref-Fuel is enjoying the benefits of redundant communications to every module with no single point of failure. The waste-to-energy plant used to suffer one outage every several months—amounting to about 15 hours of downtime a year at a total cost of $75,000—but recently it hasn’t experienced any. What’s more, added Haselbauer, "our DCS maintenance costs have decreased significantly, and we’ve reduced our inventory of DCS replacement parts by 90%."

Just as importantly, operators are finding the new control system much easier to operate than the old one. Instead of having to scroll through as many as 75 different views, they can now monitor the performance of the plant through six primary screen views. "At first," explained Haselbauer, "the operators were reluctant to change to the new views because they were comfortable with the old system. But once they saw how easy it was to point and click rather than scroll, they made the switch happily. They gained confidence in the new system very quickly."