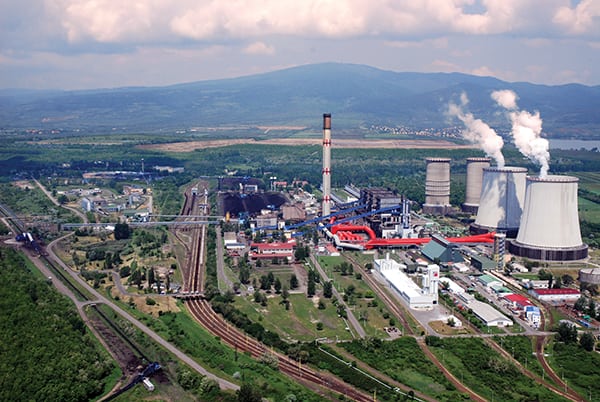 Hungary’s largest coal-fired power plant is a model of efficiency and environmental impact despite its 1960s-era vintage. Continual upgrades have kept the plant running smoothly, and a modern dense slurry ash-handling system keeps combustion residuals under control and allows for a zero liquid discharge posture.

Unlike some of its neighbors in Eastern Europe, Hungary generates relatively little of its electricity from coal. Most—around 53% in 2014—comes from its four-unit Paks Nuclear Power Plant, and much of the rest comes from natural gas (it also imports substantial amounts from Slovakia and Ukraine). Still, the nation gets about 20% of its domestic generation from coal, and almost all of that comes from one facility: the 966-MW Mátra Power Plant about 90 kilometers (km) northeast of Budapest.

Hungary is not a major coal producer, but it nevertheless has lignite resources that it has exploited for decades. Roughly 90% of its coal comes from two open-pit mines in Visonta and Bükkábrány, both of which are owned by the same firm that owns Mátra. The mine in Visonta is adjacent to the plant and delivers its coal via conveyor belt. The mine in Bükkábrány is about 50 km away and delivers its coal by rail. (Both delivery systems are visible in the header photo.)

Since that time, Mátra has established an impressive record of continuous improvement. The plant underwent a major upgrade, modernization, and refurbishment between 1986 and 1992, when the boilers and auxiliary systems for the three 200-MW units were replaced and electrostatic precipitators were added to control particulate emissions. The plant’s steam turbines, generators, transformers, and control systems were also modernized.

Despite the plant’s growing age, it remained a key component of the national power mix into the 21st century. After the parent company was acquired by RWE in 1995, an additional round of upgrades and improvements beginning in 1998 further improved Mátra’s efficiency and environmental footprint. Wet flue gas desulfurizers (FGD) were added to reduce SO2 emissions, and other modifications were implemented to increase capacity of the three larger units and extend their lifetimes. 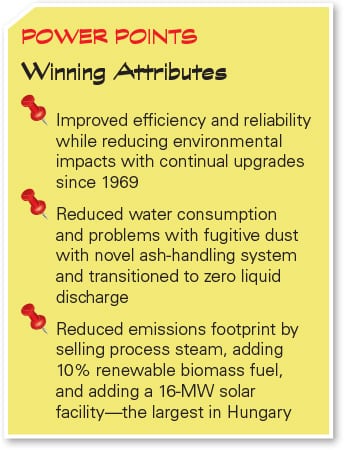 The FGD system used a solution that was unique at the time, being installed inside dry cooling towers to use the natural draft to release the flue gas to the atmosphere. This provided a much larger lift than the old 202-m stack. Gypsum from the FGD system is recycled in an adjacent facility to produce a variety of construction products.

In 2007, two 33-MW gas turbines were installed upstream of the boilers to further improve controllability and efficiency. In addition to generating power, heat from the turbine exhaust is used in the high-pressure economizers of Units 4 and 5.

Mátra has also begun adding renewable generation to its output. To reduce its carbon emissions, it began firing 10% biomass several years ago, using waste material from an adjacent biodiesel plant that relies on the plant’s process steam and power for operations. Most recently, Mátra commissioned what is currently the largest solar plant in Hungary, a 16-MW system built on top of a retired coal ash landfill.

The ash-handling system was another focus of major upgrades in the 2000s. The original system used a lean slurry approach to transport fly ash and bottom ash to settling ponds nearby. With a solids-to-water ratio of 1:6 to 1:8, the system used an enormous amount of water. On an annual basis, the plant required around 10 million cubic meters (m3) of water to process 1.5 million tons of ash. Pumping that much slurry also meant a substantial parasitic power drain and increased operating costs.

Worse, while much of the water was recovered and reused, as the ash dried, the landfill experienced severe fugitive dust problems, leading to continual complaints from nearby villages and farms. Dust-suppression measures using water spraying were not successful in sufficiently reducing fugitive dust and further increased water usage.

In the mid-1990s, the decision was made to change how the plant handled its coal ash and move to an approach that would reduce both water consumption and fugitive dust. The plant managers opted to go with a Circumix dense slurry system (DSS) supplied by Enexio Hungary (then GEA EGI Contracting Engineering). (For details of the process, see “Solid Coal Ash-Handling System Avoids Problems Associated with Wet and Dry Systems” in the August 2014 issue.)

Unlike lean slurry, DSS technology relies on pozzolanic reactions between the reactive components of fly ash and water. The slurry forms a hard, cement-like substance after the ash is placed in a landfill, but it is still pumpable before the reactions complete. Water and ash are combined in a 1:1 ratio, greatly reducing water requirements.

As with cement used for construction, the key to DSS is proper mixing and careful control of the water-slurry ratio. When properly mixed, the slurry has high homogeneity, which ensures ideal physical characteristics (high strength and low hydraulic conductivity) for the final solidified product.

In the Circumix system, the mixer receives the fly ash and combines it with sufficient water for a 1:1 ratio. Rather than using mechanical agitation, it relies on hydrodynamic mixing inside the mixer vessel using centrifugal pumps. Once combined, the dense slurry is pumped to the landfill for disposal. In addition to fly ash, other solid residuals are mixed into the slurry, including bottom ash, coarse ash from the economizer and air heaters, and gypsum from the FGD system. (See the slideshow associated with this article for more photos of the process.)

When Mátra decided to move to a DSS for ash handling, the approach was still a novel technology, and regulatory authorities required a series of feasibility studies to ensure it would work effectively, including a small pilot system to test the technology in action. Permission to proceed was given in 1995. Mátra’s DSS was supplied and constructed by Enexio, with the slurry recirculation and transport pumps supplied by Weir Minerals (then Warman). The new system was installed in parallel alongside the existing lean slurry system to minimize impact on plant operations. The new DSS landfill was also built on top of an old drained lean slurry pit, meaning that the new dense slurry, once solidified, would serve as a hard cap on the old landfill.

In operation, the DSS requires roughly 20% of the water and power needs of the old lean slurry system. Make-up water for the DSS is supplied by various wastewater streams from the power plant and coal mine, such as the FGD system, industrial wastewater, blow-down from the auxiliary wet cooling towers, and coal mine runoff.

Of the water used, about 66% is bound up with the solidified ash, 10% evaporates, and the remaining 24% drains out as leachate. Because the ash remains behind, the leachate is relatively clean and can be recycled as makeup water for the FGD system, supplying about 90% of that system’s needs and creating a zero liquid discharge posture for the plant as a whole. In 2015, Mátra used just 3 million m3 of water to process 2.1 million tons of ash. The system is a closed loop, and no water escapes into the environment (beyond what evaporates). Monitoring wells installed around the landfills have confirmed that no groundwater contamination has occurred since the DSS was implemented.

The DSS approach has other advantages. Because the ash is solidified, fugitive dust has been eliminated and no water spraying is necessary. The compressive strength of the solidified ash allows for tiered disposal, increasing space efficiency of the landfill. As each layer solidifies, some of the solid ash around the edges is excavated and used to build the dikes for the next tier above. Each tier is about 3 m to 4 m high, eventually forming a pyramid-like structure that is covered with earth and landscaped as the tiers rise. The first landfill reached maximum height a few years ago and was used as the site for the plant’s new solar farm (Figure 1).

Since the previous round of upgrades, Mátra has continued its tradition of improvement. The latest overhaul, performed by Alstom, is in the process of renovating and modernizing the steam turbines for two of the 200-MW blocks, including several of the turbine subsystems. The work on Unit 4 was completed this year, and Unit 5 will be upgraded during an outage in 2017. ■