Pandemonium erupted at the swanky Taufiq Cabaret on Muhammad-Ali Square in Alexandria, Egypt. It was in the wee hours of a Sunday morning when only the usual after-hours crowd was about—locals dressed in nightgown-like galabiyehs, the predatory fez-wearing "guides" who attached themselves to foreigners like leeches, cab drivers cruising for fares, and early-morning revelers of various nationalities staggering along the quiet square.

Suddenly, voices rang out in an excited staccato jumble in front of the Taufiq. Everyone within hearing distance raced towards the cabaret to investigate. The center of attraction was the stern end of a horse protruding from the doorway. A swarthy policeman and a husky American had their shoulders to the horse’s rump, working feverishly to push the balking animal inside. But the beast resisted stubbornly by bracing all fours firmly against their effort.

"Heave ho—now, all together, HEAVE," roared the American in his foghorn voice, putting all his hefty beef against the horse’s port rump, while the policeman worked vigorously on the starboard side. 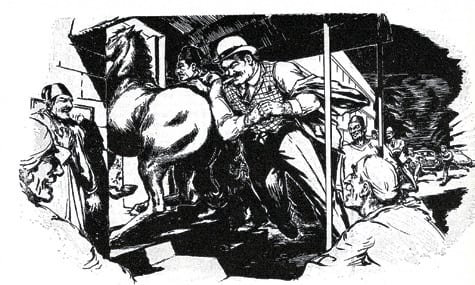 Marmaduke and the local cop applied their shoulders to the horse’s stern, trying to boost the animal into the cabaret.

Yells of encouragement in a dozen tongues came from inside and outside the cabaret. But most of them were urging the horse to victory. Suddenly a cab drove up to the curb, and a hard-boiled, weather-beaten mariner jumped out. He was Captain Roger Squid of the Greek contraband runner El Dikka. The captain and his ship were notorious in Mediterranean ports for handling hot cargo—anything from guns to immigrants to opium, as long as a fast buck could be made.

"Well, if it isn’t Marmaduke Surfaceblow—and up to his old tricks," hooted the surprised captain, busting out laughing. "What are you trying to do, Marmy, run an Egyptian horsepower experiment? Ha ha ha!"

The muscular American relaxed for a split second to identify this familiar voice. The horse seized the opportunity and quickly backed out, pushing both his tormentors aside. As the horse’s head cleared the doorway, a flood of yelling merrymakers headed by the manager exploded out of the cabaret. The irate manager ran up to the policeman and got into his face, waving his hands wildly and yelling at the top of his voice.

While the manager stole the show, the captain and Marmaduke exchanged a few hurried words. The two men of action shoved through the milling crowd and jumped into the waiting taxi, leaving the confusion behind.

"Central Quay," snapped the captain to the driver, lighting a cigarette. Turning to Marmy, he explained, "Now here’s the setup. I must sail the El Dikka not later than 8 a.m. or I’m in trouble. But that knucklehead I picked up for an engineer in Tangier this trip hasn’t been able to get my diesel-generator set started in two days. You gotta get her going, Marmy, or I’m sunk. There’s 200 bucks in it for you."

"You just busted up a highly cushy financial deal," put in Marmaduke, as if to strengthen his bargaining position, "but I’ll get you out of here all right. I have to—I could use those 200 clams."

"Just so we sail on time," answered Captain Squid, glancing uneasily at his wristwatch as they bumped across the railroad tracks on Bab El Karasta Street. Minutes later, the cab reached the quay and screeched to a halt. The two men climbed out and hurried up the gangplank. The El Dikka was a small, streamlined diesel ship, probably built as a luxury yacht.

Walking aft along the deck, the captain led Marmy to the engine room ladder. They descended to the tiny generator platform.

"This looks like a converted steam schooner," roared Marmaduke, wiping the sweat from his face when they reached the generator. Looking around, he added, "What’d they do, just dump this scrap iron down here and bolt it where it landed?"

"This is my old shipmate Marmaduke Surfaceblow," rasped Captain Squid to a greasy character puttering around the generator. He had a deep scar across his right cheek and an ear was missing. Jerking a thumb at the wretch, the captain added, "Marmy, this is my engineer. We call him Grade-A for short."

Marmy nodded, threw his jacket over the instrument panel handrail, rolled up his sleeves, and looked around again. The diesel was a V-12-cylinder, solid-injection design with 300 brake hp. It was connected directly to a 200-kW dc generator through a flexible coupling. Two 36-volt electric motors were used as starters. They were attached to the engine block and engaged when starting and disengaged when running.

"What, no air starters on this rust bucket?" suddenly roared Marmy, looking at the engineer.

"Nope," came the answer. Then he added, "These electric starters are sparked by a 1,200-amp lead-acid storage battery, and those batteries are grade A. I say that because I double-checked them."

"Did you relieve the compression in the cylinders?" asked Marmy, hoping to avoid extra work for the battery.

"Everything’s grade A," replied the engineer. By then, Marmy was barring the flywheel over by hand, to make sure it turned freely.

"How’s your electric switching mechanism?" was Marmy’s next question, looking that equipment over carefully.

"Grade A," said the engineer, snickering.

"I checked both the main and starter battery sets with meters and hydrometers a number of times," volunteered Mr. Grade-A, anticipating the next question. "And they’re both grade A," he concluded triumphantly.

"Now try to start the engine," ordered Marmy, paying no attention to Grade-A’s comments. The engineer reluctantly went through all the proper motions of starting the engine, then blurted out, "You see, she won’t start. I told you so."

"Yeah, I guess she just doesn’t have the oomph," Marmy answered, almost to himself. "Now let’s go back to the battery room."

"Look here, Mr. Big Shot, let’s cut out all this kids’ play," growled the engineer as they got inside. "These batteries are grade A—I’ve been checking them for two days. Besides," he assured, raising his voice a few decibels, "the old man had a local guy here the other day. He gave those batteries everything but a blood test. Know what he said?"

"Sure, he said they’re grade A," shot back Marmy, annoyed. "But when I troubleshoot, I trust no one. This engine won’t start—so everything can’t be grade A. Now get the lead out and get me a hydrometer," he roared angrily, clenching his fists.

Grade-A was so startled he bolted out of the room and was back in a flash with a hydrometer. Marmy unscrewed a fill plug from a battery cell, played his flashlight beam inside, and squinted his eyes.

"There’s your trouble," he rasped at the startled man who was watching his every move. "This battery is fatigue-exhausted. I can tell by the color of the negative and positive plates."

"She’s grade A, I tell you," protested the engineer. With that, he grabbed a hydrometer and tested the cell. To Marmy’s utter surprise, it indicated "full charge." Marmy looked incredulously at the reading, then checked for himself. He seemed flabbergasted.

"Get me some distilled water," snarled Marmy, eyeing the hydrometer suspiciously. The engineer brought the water and Marmy took a reading. It too indicated full charge.

"Just as I thought," boomed Marmaduke.

"Well I’ll be a flat-footed mermaid," was all that Grade-A could say. With that he bolted out of the battery room. The engineer returned just as quickly with three new hydrometers in a carton. He quickly tested each one in the distilled water. Each showed full charge. All four hydrometers were inaccurate. Grade-A looked at Marmy in disbelief.

"You needn’t be all fish eyes," reprimanded Marmy. "Some jerk at the factory pulled a boner on the calibrations. When will you guys stop believing everything that has a factory label?"

The engineer hurriedly connected a voltmeter to the starting battery. It, too, indicated full voltage.

"BILGEWATER on full voltage," roared Marmaduke. "You chowderheads always confuse full voltage with full charge. To prove it, try to start the engine again and see what happens to your full voltage."

Grade-A pushed the starting button. Sure enough, the voltage on the meter nose-dived to almost zero like a bos’n’s sounding lead plummeting to the bottom.

Just then, Captain Squid poked his head into the narrow battery room. "What’s the story, Marmy? Can you get this generator started?" he asked anxiously. "We got only three hours."

"Everything’s shipshape," boasted Marmy, puffing furiously on his cigar butt. "Your starting battery’s dead as a sailor after a week’s shore leave. But because this guy has been getting phony readings, he hasn’t taken the trouble to look further than his bow sprit."

"The main battery," shot back Marmaduke. "I’ll bet she isn’t run down." With that, he asked for a couple of electric cables. Then he quickly hooked the main battery to the balky diesel’s generator to motorize it. The generator, acting like a motor, suddenly started cranking the diesel engine. Marmy opened the fuel throttle slightly and instantly the balky engine roared to life as she started firing. The whole generator platform vibrated violently.

"Hooray," cried Captain Squid above the deafening din. He grabbed Marmy’s arm and motioned for him to follow.

A few minutes later in the captain’s luxurious suite, both men were seated on the leather settee, drinking Sandpaper Gin. The big oscillating fan blew wave after wave of cool, refreshing breeze over them. Marmy suddenly put down his glass and stuffed $200 worth of 20-piastre banknotes into his pocket as Captain Squid shelled them out.

"Now tell me, Marmy," said Squid, after they both drank a toast to the El Dikka’s safe departure, "I’ve seen you do a lot of screwball things, but what in hell was all the horseplay about at the Taufiq Cabaret?"

"Just a gimmick to earn a fast buck and get the wrinkles out of my belly," roared Marmy, bursting into violent laughter. "The idea flashed into my noggin on the spur of the moment. You see, Squid, I’m waiting for the SS Marmara to come back from Beirut. I went broke last week, so I picked up a temporary job as bouncer at the Taufiq. Well, last night potbellied King Farouk waddled in with three female snake charmers. Passing his table, I heard him say, ‘my kingdom for a horse; what I wouldn’t do right now for a horse.’ His harem laughed, giving me a brainstorm.

" ‘What’s a horse worth to you, King,’ I asked, ‘delivered to this table?’ He took my bait. Without batting an eye, he waved a 100-piastre note in front of my nose, thinking he had me on the spot. His covey of charmers laughed again.

"Hurrying into the street, I wised up my friend Ali Salama the cop and promised him 10 piastres of the loot. That was like waving a pork chop in front of a wolf. With the king paying for the laughs, Ali wasn’t worried about losing his job," roared Marmaduke

"Inside of ten minutes, Salama was back with that mare," continued Marmy, after wetting his whistle. "But the manager wasn’t happy and gave the nag’s bow end trouble while Ali and I worked on his stern. That’s when you drove up. And when you flashed your SOS," added Marmy, again ballasting his tanks from his glass, "you doubled the ante. I knew I’d have a better chance of picking up some cash by gambling on your engine’s horsepower than on the four-legged variety."