On September 25, 2004, Widows Creek Unit 3 in Stevenson, Alabama, established a new continuous-run record for TVA’s fossil plant portfolio when it surpassed the 616-day mark held by Johnsonville Unit 3 in Tennessee, continuing on to set a national record for a continuous run in April 2006 for 819 days before it was shutdown for scheduled maintenance. That record was later surpassed when TVA’s Shawnee Fossil Plant Unit 6 in Feb. 2007 compled a run of 1,093 days, 11 hours, and 24 minutes. Earlier this year, TVA’s Paradise Fossil Plant Unit 2 set a new continuous operating record of 239+ days for a unit with a cyclone-fired boiler.

The O&M folks at Widows Creek must be doing something right, because Unit 3 also didn’t have a tube leak in over 1,200 days. According to TVA, the previous American record for a coal-fired, single-boiler, single-turbine unit was 712 days, held by Unit 4 of Toledo Edison’s Bayshore Station.

As with a car, it’s not the age of a plant but rather its upkeep that determines its reliability. TVA’s 11 coal-fired plants have a total of 59 coal-fired units (of which 46 are active), including the eight at Widows Creek, and supply about half of the utility’s load (Figure 1). 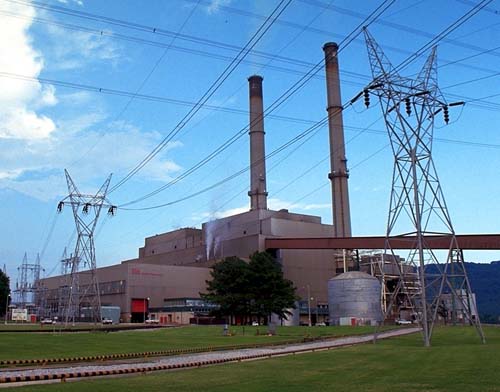 1. In 2006, Unit 3 of TVA’s Widow Creek Plant set a U.S. record (since surpassed) for continuous days of operation by a coal-fired boiler. Courtesy: TVA

Of course, most utilities lack the deep pockets that have enabled TVA to commit to the aforementioned long-term investments in its facilities. However, experience indicates that significant unit heat rate improvements can be achieved by making a concerted effort to eliminate “stealth” air in-leakage losses. As the list of 15 O&M variables that can be controlled to reduce heat rate that follows shows, there’s no shortage of variables that can be controlled more accurately to reduce heat rate, and many involve air in-leakage.

However, what often makes combustion optimization difficult is the fact that many of these variables are interrelated.

The coal-burning community within the U.S. generation industry is well aware of the savings that lower heat rates can produce. In fact, EPRI has an ongoing program devoted solely to improving its members’ efforts in that regard. Similarly, the purpose of this article is to suggest specific steps you can take to restore your “senior citizen” to its former vitality.

The most common way to improve the heat rate and capacity factor of a coal-fired plant is to optimize the boiler’s fuel and air inputs (Figure 2). Many plants strive to do that, with varying degrees of success. However, the author has noticed from his visits to many coal-fired facilities over the years that most plants running at or near peak efficiency have something in common: a high-value, test-driven maintenance program in place. Among the procedures such programs call for are leakage testing to improve air heater seal maintenance, and frequent testing of the performance of pulverizers (including primary airflow calibrations), to optimize their performance. 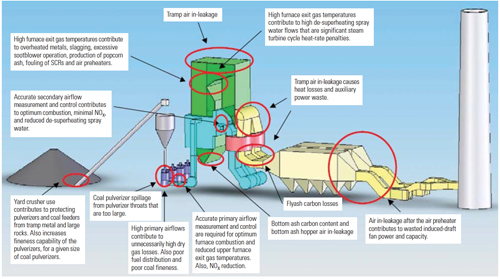 2. Stealth leakage losses in a typical balanced-draft coal-fired power plant could be responsible for losses in efficiency of up to 10%. Courtesy: Storm Technologies, Inc.

Why does optimizing the combustion process have such a big and beneficial impact on a plant’s heat rate, capacity factor, reliability, and profitability? One reason: when the gas temperatures in a boiler’s highly stratified upper furnace are running at the design level, the boiler can burn a wider variety of fuels and lower-quality fuels—including some with very low ash fusion temperatures—without slagging or fouling. Furthermore, reducing the number of high gas temperature “lanes” in the upper furnace reduces the potential number of superheater and reheater tubes that can overheat. With fewer tubes to overheat, the plant can stay on-line longer, with beneficial impact on its annual average capacity factor and heat rate.

The impact of optimized combustion on plant economics is likewise beneficial, and can be quite substantial. As Table 1 shows, the estimated annual saving produced by lowering the heat rate of a 400-MW coal-fired plant with an 80% capacity by 750 Btu/kWh is more than $2 million. 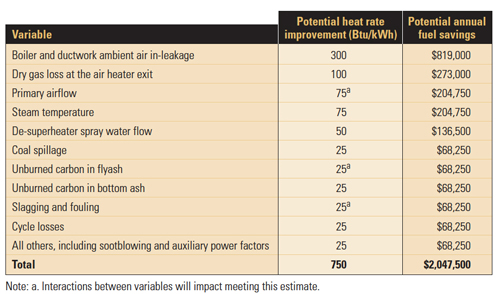 Table 1. Many Variables. The possibilities for, and payoffs from, improving the heat rate of a 400-MW, 2,400-psi utility coal-fired boiler. Source: Storm Technologies, Inc.

Ready for a crash course in reducing air in-leakage? As a prerequisite, you should know that balanced-draft boilers can accumulate significant quantities of air in-leakage or “tramp” air. Tramp air can leak into the boiler casing, through expansion joints (Figures 3 and 4), into superheater tube penetrations in the boiler penthouse (Figure 5), through the ash hopper, or through torn welds in the welded wall construction. The result is a significant loss of boiler efficiency, caused by high furnace exit gas temperatures. 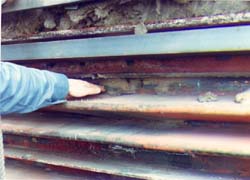 3. Leaks in an economizer expansion where the level of air in-leakage was about 15% that of total combustion air. Courtesy: Storm Technologies, Inc. 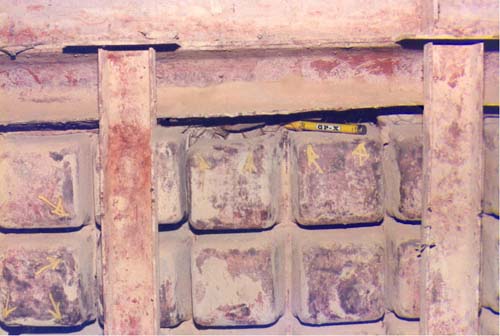 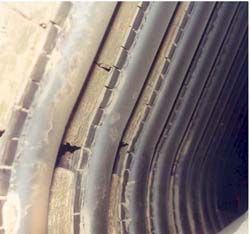 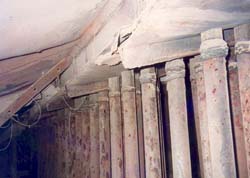 5. At this roof/penthouse tube penetration, the level of air in-leakage was approximately 2% of the level of total combustion air. Shown are typical “air washing” of the tube penetrations (left) and air infiltration at the juncture of the roof and rear convection wall tubes (right). Courtesy: Storm Technologies, Inc.

The tramp air, which contributes nothing to combustion, is discharged out the stack at the stack temperature. In some extreme cases, the amount of air in-leakage at the boiler has been found to be as high as 15% of the equivalent level of total combustion air. The heat rate penalty is even more significant if the tramp air also is leaking into the boiler backpass or economizer outlet flue gas ductwork. The flue gas composition at the air heater inlet flue gas is measured as if the air flowed through the burners, and is generally not quantified or detected in an ASME PTC-4.1 or PTC-4.0 boiler efficiency test.

Air in-leakage also can reduce the quality of combustion by lowering the amount of excess oxygen in the furnace. Low levels of excess oxygen can lead to secondary combustion high in the furnace, which then contributes to higher than optimal furnace exit gas temperatures (FEGTs). The higher FEGTs, in turn, contribute to steam cycle losses by increasing the flow of desuperheating spray water into the superheater or reheater above the optimal level. Recall that in most sub-critical steam cycles, desuperheating spray water comes directly from the boiler feedpump and bypasses the top feedwater heater(s), the top heater, and the high-pressure turbine.

High FEGTs will almost certainly be the result if the atmosphere in the upper furnace is reducing. When this is the case, often the softening temperature and sometimes the fluid temperature of the coal ash is approached or exceeded. Due to the high FEGT, and closer tube spacing of the boiler convection passes, slagging and fouling are likely to increase (Figures 6 and 7). Sootblowing more frequently may mitigate the problem, but doing so incurs two costs: the expense of using steam or compressed air to clean boiler surfaces, and an increase in draft losses due to popcorn ash carryover into the baskets of the selective catalytic reduction system and/or air heater. 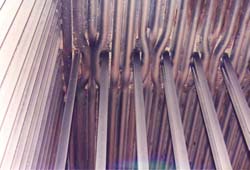 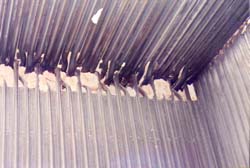 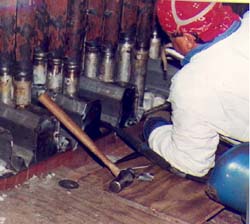 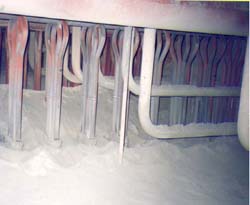 Regarding the latter, recall that increased draft losses contribute to higher auxiliary power consumption by the air heater. They also increase air in-leakage by increasing the pressure differential between outside air and air in the duct. Finally, increased draft losses can worsen furnace conditions by taxing the capacity of the induced-draft fan.

Finally, consider the air in-leakage that bypasses the airside of the combustion air heater. Whether it is backpass leakage, or air that leaks into the lower boiler ash hopper due to a damaged water seal, this air does not flow through the air path of the air heater and therefore contributes to a higher FEGT. High FEGTs and the masking of high temperatures by the dilution of air in-leakage also can create significant increases in dry-gas loss that an ASME PTC-4.1 or PTC-4.0 performance test can quantify.

–Richard F. (Dick) Storm is president of Storm Technologies, Inc. (www.stormeng.com), a consultancy based in Albemarle, N.C. The firm’s specialty is optimizing the performance of industrial and utility boilers through testing and measurement and the pursuit of excellence in O&M. This is an edited and updated version of an article that appeared in the March 2005 issue of POWER. Part 2 will appear in the January 2014 issue of COAL POWER.