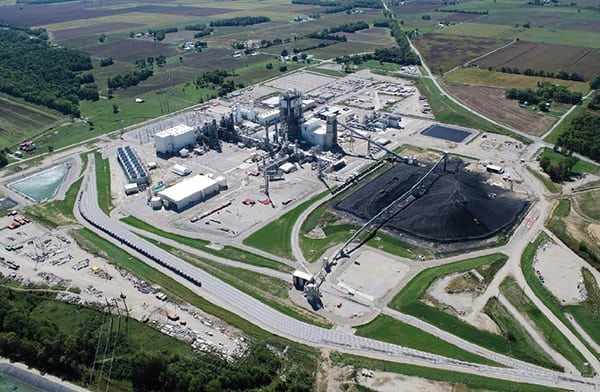 Duke Energy Indiana was at an energy crossroads a decade ago. The last two operating units at the Edwardsport Generating Station were scheduled for retirement, new baseload generation was required, and using Indiana coal to fuel a new plant was desirable. Duke Energy selected integrated gasification combined cycle (IGCC) technology to provide 618 MW of baseload power for its customers. Duke Energy declared the IGCC plant commercial in June 2013.

There will surely be readers who will disagree with our selection of the Edwardsport Generating Station integrated gasification combined cycle (IGCC) as a POWER Top Plant. Opponents argue the final price tag for Edwardsport could have purchased five times the nameplate rating of natural gas–fired generation while incurring little technology or completion risk. Others argue that the original decision-making process was flawed given today’s low price for natural gas and that there is no compelling regulatory requirement for pursuing the carbon capture potential of IGCC technology. They forget that natural gas prices were spiking and carbon control proposals dominated the news at the time this project was given a green light. Reduced demand for electricity has also called into question whether the plant is even needed, but again, that’s 20/20 hindsight. All will agree that the decision to build the plant remains controversial and discussions about it will likely remain contentious.

Nevertheless, Edwardsport should be recognized as a Top Plant for two reasons.

First, Duke Energy decided that commercializing state-of-the-art gasification technology was the right thing to do (although, in retrospect, for the wrong reasons). At the time, Duke was a strong supporter of several ill-fated legislative carbon control proposals. Duke believed that “climate legislation is likely forthcoming” and “we would prefer to lead the way on this issue. Edwardsport provides that opportunity.” Also, the then-20% cost premium for the project was to be offset principally by federal tax credits included in the 2005 Energy Policy Act and by avoiding the soon-expected cost of carbon emission allowances.

Whatever your personal feelings about carbon controls, one must appreciate Duke’s single-mindedness in deploying “bleeding edge” technologies, particularly in an industry customarily uninterested in serial No. 1 projects, particularly those with a nine- or 10-digit price tag.

The second reason for this award is that Edwardsport remains too important to overlook. It is one of only two IGCC projects that will come to fruition in the near future as developers have abandoned more than three dozen similar projects over the past decade. The power industry must learn from its good and bad experiences and grow stronger. Edwardsport is likely the first giant step on the development path toward next-generation coal combustion technology.

IGCC has many desirable operating characteristics, such as lower air emissions, less water use, less solid waste generation, and higher gross thermal efficiency than a conventional pulverized coal plant with modern emission controls. These benefits increase when a plant burns high-sulfur Midwestern coal, as Edwardsport does. In fact, with IGCC, emissions of criteria pollutants are generally an order of magnitude cleaner than required by current regulations. In general, the lower emissions are possible because the pollutants are removed before combustion rather than post-combustion, as with a typical pulverized coal plant. At Edwardsport, key pollutants (particulates, sulfur, and mercury) are removed between the gasifier and the combustion turbines, when they are in a more concentrated form and removal technologies are much more efficient.

Additionally, and a prime reason Duke chose this technology in the first place, an IGCC plant can be designed from the start, or retrofitted, to capture carbon dioxide prior to fuel combustion.

The Edwardsport 2 x 1 IGCC uses a coal gasification system to convert coal into a synthesis gas (syngas) that fuels the combustion turbines (CTs). Bechtel Corp. was responsible for project design and construction of the plant based on General Electric (GE) gasification technology. GE provided the process design and two separate trains of its radiant quench gasification equipment. The process—capable of using high-sulfur, high-ash coals found in the Midwest—converts the coal into a slurry and feeds it into the gasifier along with oxygen, where it is turned into raw syngas consisting of H2 and CO. The raw syngas is next scrubbed of flyash, mercury, chlorides, and sulfur before it is burned in the CTs.

Duke received approval to construct Edwardsport from the Indiana Utility Regulatory Commission (IURC) on Nov. 20, 2007, despite the earnest objections of many consumer and environmental groups. When proposed in 2006, the project cost estimate was ~$2 billion, net of potential tax credits. Construction began in March 2008 and two months later the project cost estimate was increased to $2.35 billion. The planned startup date was the summer of 2011.

Duke’s clout within the political process was apparent during 2009. The proposed American Clean Energy and Security Act of 2009 (ACES) was designed around the carbon control blueprint written by US-CAP, an advocacy group of which Duke Energy was a founding member. The bill barely passed its June 26, 2009, House vote but was later defeated in the Senate. Edwardsport was well under construction by this time, reportedly 30% complete in October 2009.

The IURC capped the amount of recoverable construction costs at $2.595 billion in December 2012 as part of a 134-page settlement agreement, although the additional financing costs of $320 million are not included in the cap. The project cost is now estimated as ~$3.5 billion—$1.5 billion over the original estimate—and the plant was conservatively one year late entering service. Duke Energy responded that the increased costs were a result of the project’s “scale and complexity.”

Edwardsport was declared to be in commercial operation on June 7, 2013, although the plant was shut down for repairs six days later, the Indianapolis Star reported. The outage was reportedly caused by damage to fans required by the two gasifiers. Since repairs, the plant has been running intermittently. A monthly compliance report filed with state regulators revealed the plant operated with ~10% capacity factor in June.

Duke’s declared in-service date has reignited the passions of those opposed to the project. A Duke Energy spokesperson confirmed that the plant is expected to slowly ramp up to its full capacity over the next 15 months, taking many industry observers by surprise. Opponents suggest that Duke prematurely declared the plant commercial to take advantage of a loophole in the settlement agreement: Capital repair costs that occur subsequent to commercial operation should come under the cost cap and could be disguised as operation and maintenance costs normally paid by ratepayers. A Duke spokesperson disputes the accusation, noting, “it all depends on the repair.” The IURC and other advocacy groups will certainly closely scrutinize repair costs incurred subsequent to commercial operation.

The project team of Duke, Bechtel, and GE will unquestionably do what is necessary to get the plant running reliably in the coming months, although the controversies surrounding the project will likely not subside. The best way to quiet critics will be with a history of reliable operation.

For unilaterally taking a significant step in developing IGCC technology with carbon capture potential—a move that will allow the use of domestic coal as a power production fuel in the future—Edwardsport Generating Station is recognized as a 2013 Top Plant. We look forward to reporting on the plant’s full-load and reliable operation in 2014. ■