In its annual presentation to potential investors and industry observers, the trade association that represents U.S. investor-owned electric companies lamented a number of uncertainties affecting the overall power sector. However, it noted its member companies—which generated about 38% of all U.S. power and owned around 33% of installed capacity in 2017—are making “significant strides in carbon reduction, deployment of renewables, transportation electrification, and more.”

“We are excited and optimistic about the opportunities we have before us,” wrote EEI President Tom Kuhn in prepared remarks delivered Wednesday. “More important, we are confident the transformation we are leading will deliver America’s energy future.”  Here are some key highlights from the EEI’s presentation.

1. Industry Is Driving the Dramatic Shift in the Energy Mix Through Voluntary Carbon Commitments.

Compared to a decade ago, more than a third of power comes from carbon-free sources, including nuclear, hydro, and other renewables, and another third comes from natural gas. Since 2005, renewables’ share has quadrupled, and more than half of new electricity generation capacity is from wind and solar.

Meanwhile, “By 2024, our industry plans to retire more than 100 GW of coal-based electricity generation. As electric companies continue to transition their generating fleets, their emissions are dropping significantly,” Kuhn said. The sector saw a 28% plunge in carbon dioxide emissions below a 2005 baseline at the end of 2017—the lowest level since 1988 and lower than the transportation sector since 2016, he noted.

“This impressive trend is expected to continue, as many EEI member companies have announced significant voluntary commitments to further reduce CO2 by 2030 and 2050, many of which aim to reduce emissions by 80% below 2005 levels by 2050,” he said. To ensure the “clean energy transformation reaches its full potential,” EEI is advocating for public policies that increase research and development funding for new technologies. These include energy efficiency, energy storage, renewables, existing and next-generation nuclear, other carbon-free technologies, and carbon capture utilization and storage, he said.

A key reason for industry’s pivot to support the clean energy transformation is because “our customers increasingly are informed about energy, and it matters to them where it comes from and how they use it,” Kuhn noted. “Saving money, using less energy, and protecting the environment are all important to them, and to us.”

EEI is also actively urging policymakers, both on the federal and state levels, to back ongoing investments in the grid to increase “cost-effective” electrification and integrate renewables, Kuhn said. Battery storage is a major industry focus. An estimated 280 MW of advanced energy storage were installed in 2017, up 400% from 2014, and another 338 MW of battery storage capacity were installed in 2018, he noted.

2018 was a “watershed” year for EVs. Last October, the U.S. reached more than 1 million EVs on American roads. A new report from EEI and the Institute for Electric Innovation projects that the U.S. will have 2 million EVs by early 2021, and more than 18 million by 2030. That will require 9.6 million charge ports to support them—“a significant investment in EV charging infrastructure,” he noted. EEI is backing investments in electric transportation and infrastructure as well as supporting the EV tax credit for new vehicle purchases. Investor-owned utilities are also urging the Trump administration, which has proposed repealing the corporate average fuel economy (CAFE) standards and the greenhouse gas vehicle standards, to include compliance flexibilities focused on EV deployment.

4. Industry Is Catering to Customer Experience.

To accommodate customer expectations during the transition, EEI members are changing the way they provide products and services to customers and individualizing those products and services—for large commercial and industrial customers, as well as residential customers. Efforts include rolling out energy management mobile apps and online energy marketplaces “to deliver a branded and curated e-commerce experience to meet customers’ expectations of service and convenience,” Kuhn said. Technology and data applications are being designed to “deepen relationships” with customers and help them better engage with their energy use.

Meanwhile, to satisfy investors, the EEI recently rolled out a first-of-its-kind, industry-wide environmental, social, and governance (ESG)/sustainability reporting template. In November, the template was expanded to include members of the American Gas Association. “The template helps member companies provide investors, Wall Street analysts, and other key stakeholders with more consistent and uniform ESG/sustainability data and information delivered in a timely way,” Kuhn said.

5. Industry Is Working to Match Priorities to the Political Backdrop.

Exit polling from the midterm elections this November suggest—for the first time in more than a decade—that healthcare, not the economy, was the top issue for voters. But while energy issues did not rank among top voter concerns, state ballot initiatives in Nevada and Arizona last November, which “would have raised customer electricity prices significantly,” were significantly defeated, Kuhn noted.

However, he added: “Energy is part of the broader discussion now. Climate change and other environmental issues quickly have emerged as priorities for the House Democratic freshmen.” The EEI—which has “always has taken a bipartisan approach to issues”—expects to see much discussion in the House around efforts to mitigate and adapt to climate change, though he said passage of climate pricing legislation is unlikely, owing to Republican control of the Senate and the White House. Meanwhile, broad consensus exists about the need for an infrastructure package. Legislation related to grid security “may attract bipartisan support,” he said. Looking ahead to 2020, numerous ballot initiatives will also be critical for energy policy in many states, he said.

6. Regulatory Uncertainty Is Bad for Business.

On the regulatory front, where reversals pegged to administration changes have become the norm, more important decisions are expected this year. The Environmental Protection Agency (EPA) will likely finalize the repeal of the Clean Power Plan and replace it with the Affordable Clean Energy rule. “EEI submitted comments advocating that any final rule should consider the ongoing clean energy transition by providing states and sources with significant flexibility when determining compliance measures,” Kuhn said.

EEI won a lobbying victory last year when the EPA proposed to replace the “problematic” Waters of the United States rule, he noted. But, “Regulatory certainty regarding the continued operation, closure, and clean-up of coal ash basins also is needed,” he said. EEI is supporting the EPA’s efforts to revisit the coal ash rule by establishing realistic timeframes for the closure of ash basins.

EEI, meanwhile, has backed retention of the Mercury and Air Toxics Standards, which industry implemented and which has led to significant mercury reductions. But even if the EPA continues with the rule’s reconsideration, “This in no way lessens our commitment to a healthy environment and to transition to an even-cleaner generation fleet,” he said.

At the Federal Energy Regulatory Commission (FERC), “slow but meaningful progress” continues on issues such as return on equity and “pancaked” complaints. At the top of EEI’s priorities at FERC are a “holistic reform” of the Public Utility Regulatory Policies Act (PURPA), which Kuhn said is “an outdated statute that leads to billions of dollars in excess costs for customers.” Valuing transmission is also a priority. “Issues such as returns on equity, transmission incentives, and Order 1000 are likely to be on the Commission’s docket, and EEI will advocate for policies that recognize the important role that transmission will play, including in any discussion on resilience.” FERC should also address energy price formation to help ensure resources are compensated for the service they provide to the energy grid, he said.

At the state level, EEI will lobby for initiatives that “ensure the sustained growth of the industry, including an increased focus on the value of the energy grid and the importance of recovery mechanisms based on cost-causation.” That includes: rate and regulatory reforms that “recognize customer customization and segmentation, while ensuring fairness by balancing economic efficiency, equity, revenue adequacy, bill stability, and customer satisfaction.”

7. Storm and Wildfire Response Has Become a Major Industry Focus.

2018 tested the industry’s resolve with four nor’easters, devastating wildfires, and a pair of major hurricanes, Florence and Michael. But industry continues to learn from response measures. “We leveraged the industry-government partnership forged through the CEO-led Electricity Subsector Coordinating Council (ESCC) to facilitate timely communications and to coordinate resource allocation and response efforts,” Kuhn said.

EEI is now focused on collectively developing strategies to manage and mitigate wildfire risks. A wildfire “practice” it developed, for example, seeks to address access issues to perform vegetation management and legal and insurance challenges in California and other states.

“It is important to recognize that during this time when division and disagreement often take center stage, all segments of the energy sector have found common cause to work together on the critical issues of security and storm response. This unity across the business models, with our natural gas counterparts, and with government leadership has provided extraordinary benefit to our customers and our communities,” Kuhn said.

8. Along with Changing Priorities and Opportunities, Industry Spending, Business Models Are Shifting. 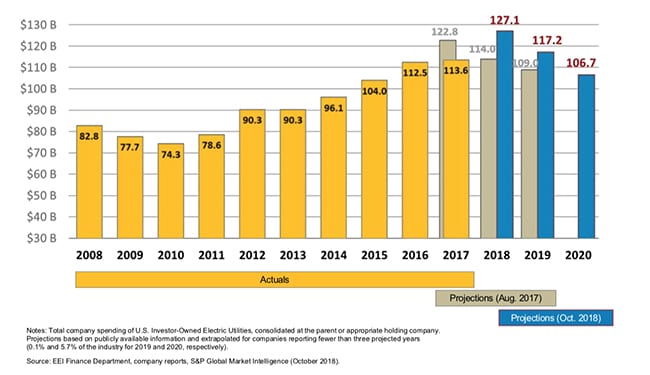 But how the spending is allocated has changed. “Member company projections indicate that investment in the generation segment decreased in 2018 compared to recent years, but we expect to see an elevated level of investment in the transmission and distribution (T&D) segments,” he said. T&D segments today comprise about half of industry’s total capital expenditures.

Industry continues to strengthen its credit quality, which is currently a BBB+ average (on the S&P scale). The improvement can be pegged to a distinct trend correlated with the gradual transition to a more regulated business model, Kuhn noted. “It is widely known that electric companies have been pursuing a back-to-basics approach to their businesses since the early 2000s. In fact, between 2003 and 2017, the industry moved from a balance sheet that was 63% regulated to one that is 81% regulated. This is especially important as our capital investment levels have risen dramatically,” he said.