Hidden from view in a typical coal-fired power plant is a battle that never ends. Coal attacks steel and alloy components when the fuel is transported about the plant. Predictably, over time, the abrasive nature of coal will prevail against any metal surface because metal will eventually erode. The only opportunity for metal surfaces to have a fighting chance is to advance the secret weapon: ceramics.

Coal can assume many forms, shapes, and consistencies in a typical power plant. In the coal preparation area, coal looks like a large rock. When injected into the burners, it resembles a fine dust or powder. Fly ash particles are typically found in the flue gas and can cause serious erosion on metal surfaces along its flow path. Such erosion can significantly reduce the operational life of boiler components if it is not addressed.

Often engineers and maintenance personnel are tasked with making attempts to extend the life of boiler components. A typical engineer in a power plant will have some experience with and knowledge of metallurgy but will have little experience with the advantages of ceramic parts. As a result, engineers will often recommend a more exotic and expensive metallic solution to replace or protect existing boiler components. Perhaps this is because the mechanics of erosion are not straightforward and often not well understood.

Laboratory and field tests have shown that ceramics do very well in sliding or low-acute-angle abrasion when compared to metallic parts. The one exception is that metallic parts do show an advantage in direct impact or 90 degree impingement. Because most metals are ductile in nature, they simply deform in direct impact situations. Very little material is actually removed from the base material; it is simply “moved around.” This is why in most impact situations, a softer metal often performs better than a harder metal or ceramic from an erosion standpoint. For example, Blasch has tested the abrasion characteristics of AR400 Steel and 309 stainless steel at 90 degree impingement. The stainless steel consistently does much better and loses less metal over time.

There are also many grades and compositions of silicon carbide-based ceramics available to a plant engineer, including oxide bonded SiC (Oxytron), nitride bonded SiC (Nitron), alumina bonded SiC (Altron) and reaction bonded SiC (InVinCer by Blasch). The wear resistance increases in that order. Although one would think that the cost would follow suit, such is not the case. Altron, a newly developed material, has the wear resistance of reaction-bonded SiC (RBSC) but costs less than nitride-bonded SiC (NBSC), making it a logical choice for most wear applications.

The nature of wear in ceramics is very interesting when examined closely. Depending on the material, ceramics are often composed of several different sizes of raw material or grain. These grains are then in effect glued together with a ceramic binder matrix of some form or another. Both the grains and the binder are mechanically brittle materials and, as such, do not deform plastically to any large extent before failure. That limits their ability to absorb mechanical shock. In a 90 degree impingement abrasion situation, the combination of binder and grains must absorb all the energy of the impacting particles. Abrasive wear occurs as the binder matrix progressively fails due to these continuous small impacts. When enough of these grains separate, the part may fail or expose the item it was trying to protect.

In a coal-fired power plant, a majority of the fly ash produced in the boilers is deposited over the boiler tube walls, economizers, air heaters, and superheater tubes via sliding or a low acute angle of impact. The rest of the ash flows in the stream of flue gas leaving the boiler and is later filtered out. These ash particles collide with the boiler’s steel components and cause extensive surface erosion. In advanced stages of erosion, the components get perforated and may fail once they lose their structural integrity. Such erosion shortens the service life of boiler components.

Once this happens, the unit has to be shut down in order to replace damaged components, typically during an outage (with luck, a planned one). The resulting penalty is not only the cost of replacing components but also the cost of halting power production. Worse yet, if the shutdown is unanticipated, costs can skyrocket.

Even though they may not be very familiar with the material, it makes sense for engineers to utilize the benefits of ceramic by replacing or protecting metallic components with ceramic. For the purpose of this discussion, we will focus on three main areas of a typical coal-fired power plant where Blasch has addressed erosion with a ceramic solution.

Coal Preparation Area. There are many areas where ceramic can be used and is used in the coal prep area of a coal-fired power plant. Coal needs to be transported from the stockpile to the pulverizer, where it is crushed into a manageable size for proper combustion efficiency. It moves along piping, chutes, and hoppers, making many turns along the way. Coal slides as it travels from point A to point B in most of these components. Given its resistance to erosion caused by sliding abrasion, ceramic is a good replacement for metallic components.
Ceramics can play a major role in helping extend the life of these components. As an added benefit, ceramic is a natural nonsparking material, which helps eliminate a significant safety concern in coal preparation areas (Figure 1). 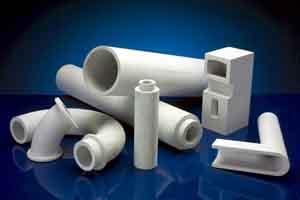 Although there are several types of ceramics that can be used in these areas, the weak link in all of these applications is the method of attachment and assembly. Small alumina tiles are often used to line an elbow or piping system. The tiles are typically glued together and bonded to the steel. The weak link is the joint or seam. Over time, coal particles will erode the joints, causing the tiles to fall out or, worse, causing the steel behind it to erode, leading to ultimate failure and down time. Anytime you can eliminate or reduce the number of joints and seams, you will extend the life of a component.

Blasch’s silicon carbide-based material, Altron, can be cast in large complex shapes like pipe sections, elbows, chutes, cyclones, cones, and similar components. As a one-piece component, Altron will often replace a complex, several-hundred-piece assembly, therefore eliminating most, if not all, of the joints and seams. The silicon carbide also is a much more abrasion-resistant material as compared to alumina tiles, providing added performance and reliability.

Tubular Air Preheaters, Economizers, and Waterwall/Superheater Tubes. Every coal-fired power plant uses metallic tubes to convey combustion gases or steam as heat is transferred. Hot, ash-laden gas will either pass over the outside of the tubes or, in the case of a gas-in/air-over configured air heater, pass inside the tubes. In the case of economizers and waterwall tubes, hot gases and ash flow over the outside of the tubes, while water and steam flow inside. Over time, ash in the gas will erode the tube to the point that holes and leaks occur, requiring tube replacement. In many cases, replaceable steel shrouds are used to protect the boiler tubes. This is, however, a band-aid, as the shrouds need to be replaced often.

Ceramics may be a better long-term solution when the plant engineer has a choice between accepting excessive downtime to repair eroded components or making a change to equipment that is more abrasion-resistant.

Monolithic refractories and ceramics, such as castables, have been used for many years to protect these components but will eventually crack after years of repeated expansion and contraction caused by thermal cycling. A better solution can be individually designed ceramic tiles, which protect the waterwall tubes. These can be affixed by many different means and, because they protect individual tubes or pairs of them, they often will survive considerably longer.

The shapes of these tiles have traditionally been simple. In recent years Blasch has developed a nitride-bonded silicon carbide material called Nitron that can be cast in very complex shapes with tolerances of better than +/-1/2%. Complex designs and dimensional control are often required to form specific joints and mating surfaces with the boiler tubes. Because heat transfer is key to increasing efficiencies, the tiles need to be as close as possible to the boiler tubes for optimum heat transfer (Figure 2). 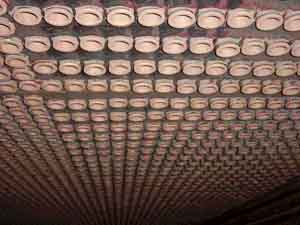 For applications in gas-in/air-over tubular air heaters (TAH), Blasch has developed a very thin-walled wear insert. Only a about a foot long, these inserts protect the inlet and outlet ends of the boiler tubes, where abrasive wear is prevalent. This is the area where ash-laden gas must make an abrupt change in direction as it flows over a tube sheet. The ash-laden gas will erode the weld and first foot or so of the boiler tube, up to the point where the flow normally becomes laminar. Many plants will use simple steel inserts to protect this area, but this too is a temporary solution. Blasch’s thin-walled TAH inserts can be used to protect these areas. They can be held in place with proprietary glue that withstands the temperature of the TAH and can be used to hold the inserts in place during ceiling applications. They are often used to protect newly installed boilers tubes but can be used to protect worn-out existing tubes that are near requiring replacement.

Mechanical Dust Collectors. There are many forms and techniques to clean up the ash-laden gas before it exits the stack, such as the multicyclone dust collector (MDC). As opposed to one large cyclone over 5 feet in diameter, a higher quantity of smaller (less than 24-inch-diameter) elements are used. These elements consist of an inlet cone, outlet tube, and spin vane, sometimes called “spinner” or “ramp.” As depicted in Figure 3, ash-laden gas enters the inlet cone. The spin vane imparts a cyclone action, where the larger particles fall out the bottom and the hot, cleaner gas exits the center of the outlet tube. The gas then will then go to another piece of equipment for finer collection and cleansing. 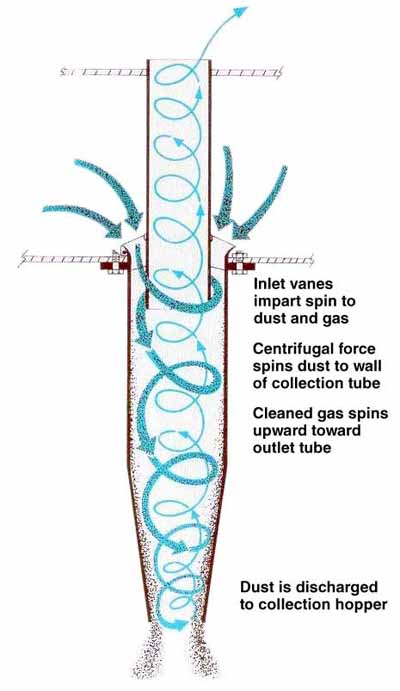 Although the gas directly impinges on the spin vane, it eventually converts to sliding abrasion and the inlet cone will develop holes over time that will allow the ash to bypass the collection process. During every maintenance outage, several dozen often require replacement. Traditionally, cast iron is the material of choice, but in a few instances, NiHard or other metals with a high Brinell hardness have been used in an effort to extend part life. These moving parts are candidates for replacement or lining with ceramic.

Ten years ago, Blasch started replacing dust collector metallic parts with its proprietary Oxytron material. Oxytron is a silicon carbide-based material that is one-third the weight of steel and far outlasts the existing metallic components. One particular coal-fired power plant was replacing 50 to 100 elements every one to three years. It now has its complete MDC equipped with Oxytron MDC parts, and the collectors show no signs of wear after many years of operation, saving about $25,000 an outage (Figure 4). 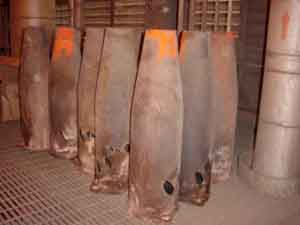