For much of its 15-year history, the Midcontinent Independent System Operator (nee the Midwest Independent System Operator) didn’t pay much attention to the topic of “resource adequacy.” The regional transmission organization, in a region rich in baseload, coal-fired power plants, had a 30%-35% reserve margin through most of its years of operation.

That excess in generating capacity was an economic problem, not a benefit, as the surplus inventory imposed costs on the consumers in the huge regional market. But it left MISO feeling fat, dumb, and happy about meeting emergency power needs. So the regional transmission organization never developed a capacity market, unlike the situation in the RTOs to the east: ISO-New England, the New York ISO, and the big dog, the PJM Interconnection. The gnarly questions of just how to define resource adequacy (beyond the conventional and limited concept of reserve margins), how to acquire and assure adequate generation in times of stress, and how to pay for the costs of having enough power available to avoid blackouts and brownouts didn’t get addressed on MISO’s agenda.

No more, as MISO and its most strenuous stakeholder group, the Organization of MISO States (OMS), found out last year. From enjoying a reserve generating margin of over 30%, MISO took a detailed inventory of the generation in the systems in its enormous footprint. MISO disscovered that the generating edge had shrunk to 12% and what was a vanishingly remote possibility of forced outages had become real.

MISO and OMS briefed the Federal Energy Regulatory Commission on the regional system’s impending vulnerability at the FERC’s monthly meeting September 18. It turned into a graduate-level seminar in electric power dynamics, as MISO presented the results of its 2014 survey of the member systems and its outlook for resource adequacy in 2016. The survey found major erosion in the region’s generating surplus, resulting from the Environmental Protection Agency’s Mercury and Air Toxics Standards (MATS) and its throttling of coal generation, the march of cheap natural gas eroding coal’s economics, and the realization, thanks to last winter’s “polar vortex” that resource adequacy is a year-round issue, not just a summer phenomenon in the Midwest and Middle South.

MISO’s Clair Moeller laid out the basics for the FERC commissioners and staff (and those civilians at the meeting or watching the webcast). MISO will be 2.5 GW short of capacity in its central and north regions in 2016, he noted. The system will be 2.5 GW in surplus in the south region. But there’s no easy way to ship the southern surplus to the shortages. On top of that the Gulf region – MISO’s southern component – is experiencing a business boom, likely to suck up some of that forecasted surplus.

“As planning reserves erode,” said Moeller, “the probability of reliance on emergency operating procedures [calling on those customer with interruptible power agreements to curtail use] and loss of load [unplanned blackouts and brownouts] will increase.” He said, “It’s tight all over and tighter in Indiana and Michigan.”

One of the charts in Moeller’s presentation drew a particularly frightening picture. It plotted the consequences of dwindling reserves, and showed that as reserve margins decrease, the probability of loss of load does not increase in a linear fashion, but exponentially:

As planning reserves erode, the probability of reliance on Emergency Operating Procedures and loss of load will increase 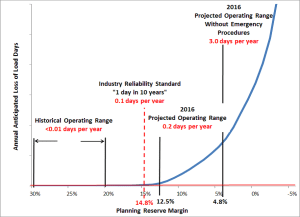