Burning biomass or nonrecyclable commercial, municipal, or industrial waste along with coal represents one of the nearest-term and lowest-cost options for reducing carbon dioxide (CO 2) emissions from existing utility power plants. At more than 150 plants worldwide, doing so has produced lower CO 2 emissions than burning coal alone. Indeed, with the number of hosts continuing to grow, cofiring could become the preferred way to make coal-fired plants "greener."

Biomass is the catch-all term for living and recently dead biological material with enough heat content to serve as fuel. The category includes many plants, such as Miscanthus, switchgrass, hemp, wheat straw, corn, poplar, willow, and sugarcane tops. The "definition" of biomass has recently been expanded to include biodegradable wastes that also are suitable for use as fuels.

All biomass is part of the carbon cycle, in which carbon from the atmosphere is converted into biological matter by photosynthesis. Upon decay or combustion, the carbon is returned to the soil or air. Because the process happens relatively quickly, plant matter used as fuel can be constantly replenished by planting and growing new material — hence its designation as a "renewable fuel." Even better, using and growing renewable fuels stabilizes the level of CO 2 — a greenhouse gas that traps heat — in the atmosphere.

Industrial, municipal, and commercial nonrecyclable waste (with little or no commercial value) includes paper, cardboard, packaging, industrial fiber materials, and by-products of wood processing. Like classic biomass, these waste materials are carbon-based, so cofiring them with coal in a power plant reduces the amount of CO 2 it emits in direct proportion to the quantity of waste consumed.

The main reason utilities are interested in burning biomass and nonrecyclable waste is to satisfy government mandates to increase their generation from renewable energy sources. Biomass and nonrecyclable waste compete with hydro, wind, and solar power as well as other forms of renewable energy. And both are at an economic disadvantage compared to fossil fuels, which have higher heat content. For example, it takes about 1 dry ton of biomass to produce 1 MW of electricity using a conventional boiler and turbine generator. Cofiring the same amount of biomass with coal raises the combustion temperature, makes the process more efficient, and increases the output to 1.4 MW per ton of biomass.

"The cost per ton of biomass and nonrecyclables is still higher than that of coal, however," says Tom Miles, president of TR Miles Technical Consultants Inc. (www.trmiles.com), an engineering firm specializing in power plant cofiring. "The final per-kilowatt-hour cost of plant production is strongly influenced by the cost of fuel delivered to the boiler. Most biomass costs $50 to $70 per ton, delivered to the burner, and that translates to a per-kilowatt-hour fuel cost of 5 to 7 cents. By comparison, burner-ready coal today costs about 3.5 cents/kWh. But because coal prices have been steadily rising, the gap is slowly closing, making cofiring more economically appealing.

"Comparatively, natural gas is more expensive than coal," Miles continues. "It is about the same cost per kilowatt-hour as biomass. The cost of power from large wind farms, which not long ago had fallen to 3 cents/kWh, has since risen to 5 to 8 cents because many of the best sites for turbines have been spoken for. As a result, cofiring coal with switchgrass, corn stalks, wood, or nonrecyclable waste suddenly looks more interesting to utilities from an economic point of view.

"Dedicated biomass and nonrecyclable waste plants are not the most cost-efficient option," concludes Miles. "If a utility wants to generate electricity from a renewable resource, it should look at coburning that resource with coal, in an existing plant, as opposed to building a new plant that generates power entirely from biomass."

One power plant that has embraced cofiring is Slough Heat and Power Ltd. (www.sloughheatandpower.co.uk). It is located about 15 miles southeast of London (Figure 1). Its experience is a textbook example of the efficiencies and benefits attainable by introducing the cofiring of biomass or nonrecyclable waste at an existing coal-fired station. 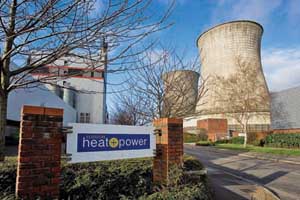 Slough Heat and Power (SHP) was a conventional coal plant until 2001, when it switched to cofiring. The conversion was prompted both by increases in the price of coal and the owner’s desire to become "greener" by burning a renewable fuel.

SHP supplies electricity, hot water, and steam to local businesses and electricity to local residents. Today, it is the UK’s largest biomass-capable generator, with six boilers and six turbines that can burn a variety of fuels. Wood and fiber fuel are SHP’s primary fuels, but it also can burn natural gas, coal, and distillate. Natural gas and coal are now used in small amounts, and only to stabilize control of the boilers. 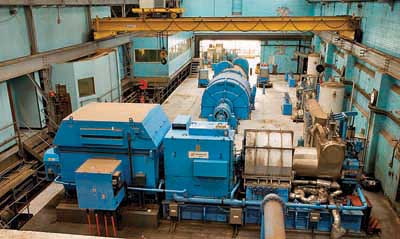 2. The plant’s turbine room floor is home to two pass-out turbine generators. The smaller one (just visible in the rear) is rated at 12 MW. The larger one in the foreground is a backpressure unit with a capacity of 35 MW. Courtesy: Slough Heat & Power

"We burn about 1,000 tons of coal a month, primarily because its chemistry helps fight corrosion," explains John Watson, SHP’s fuels manager. "But at the same time we burn about 35,000 tons a month of wood chips, which contain both wood and biomass, in the main part of the power station (Figure 3). So at the moment, we consider ourselves about 87% ‘green.’ 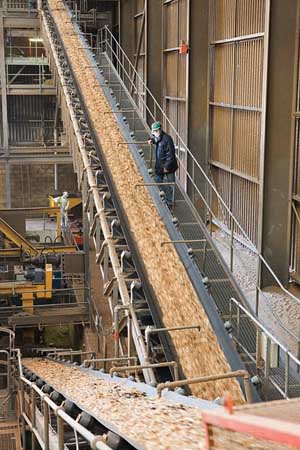 3. Wood chips being conveyed from storage to the plant’s two circulating fluidized be

"SHP uses only clean, uncontaminated wood chips," Watson continues. "Much of our wood comes from local landscapers and tree trimmers who work on woodlands, forests, parks, and roadsides. The chips we buy are made from branches, stems, and other material that would have few, if any, other economic uses.

"The plant also sources from a local sawmill’s uncontaminated wood that is a by-product of sawing timber," Watson adds. "Wood chips are also made from clean pallets, demolition wood, off-cuts, and the like."

SHP has found that burning the biomass and wood chips (Figure 4) produces less SO 2 and ash, and significantly less CO 2, than burning coal exclusively. Most of the plant’s ash is recycled and blended into road aggregates or used as fillers, as opposed to being landfilled. To date, SHP’s cofiring has kept 100,000 tons of otherwise worthless material out of local waste dumps. 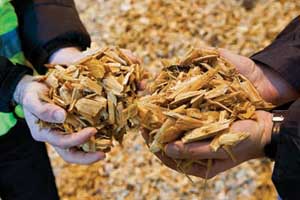 4. The plant currently burns about 35,000 tons per month of these wood chips. Courtesy: Slough Heat & Power 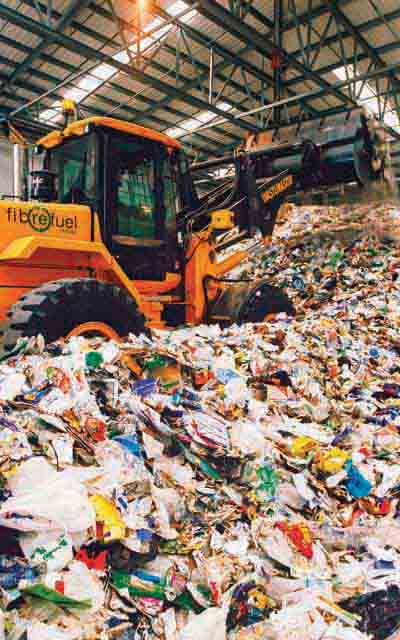 5. Nonrecyclable waste ready to be converted to fuel by an on-site processing plant operated by a dedicated utility subsidiary. Courtesy: Slough Heat & Power

Fibre Fuel currently processes approximately 8,000 tons of waste per month to produce 260 tons of fuel cubes each day. The fuel cubes have about two-thirds the heating value of an average coal.

At the heart of Fibre Fuel’s process are six state-of-the-art Model 250 cubers (Figure 6) from Warren & Baerg Manufacturing Inc. (www.warrenbaerg.com). Each machine can produce 6 to 8 tons of fuel cubes per hour, depending on the material and die selection. The cubers can handle a wide range of forage and other nonrecyclable material — be it biomass, municipal waste, or industrial waste. "The Fibre Fuel plant is currently running six Warren & Baerg cubers, but it has room for eight," Watson says. 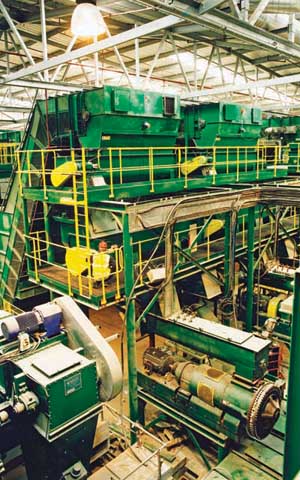 The resulting fuel cubes can be broken off in lengths of 1 inch to 3 inches, depending on the materials used and the components and adjustments selected. Since the characteristics of the fuel cubes are similar to those of coal or hog fuel, they can be used in most industrial boilers.

Warren & Baerg makes a variety of cubers that can convert many loose, low-density materials into a dense alternative fuel that is economical to transport and efficient to burn. The Model 250, for example, can process nonrecyclable papers, newsprint, poly-coated or waxed cardboard, preconsumer industrial fiber wastes, wood processing and manufacturing wastes, and postconsumer combustible fiber wastes. Short fibers (sludge) from a paper mill, coal fines, and/or petroleum coke can be added to the cubers’ output to create a blended fuel (Figure 7). 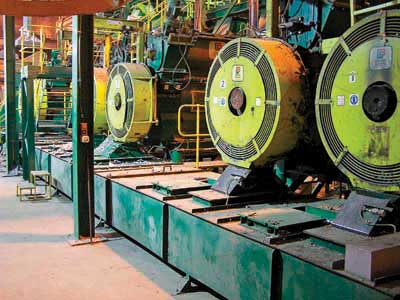 7. Each cuber produces 6 to 8 tons per hour of renewable fuel whose heating value is two-thirds that of the average coal. Courtesy: Slough Heat & Power

"We don’t just feed raw paper or cardboard directly into the boiler for two reasons," explains Watson. "One is that, as waste products, both need to be decontaminated before they can be cubed. The other relates to the size of the raw material; cubes must of a certain size for optimal combustion.

"Contaminants are removed by dedicated systems," Watson continues. "Ceramics, aggregates, and glass are removed by an air-knife that blows light material forward, leaving heavy materials to fall out as reject. A series of electromagnets takes care of ferrous metals. To remove nonferrous metals we use eddy-current separators, which work like anti-magnets to repel stuff like aluminum and brass."

A system of conveyors and screw augers then feeds the processed waste into the six cubers. Once the cubes emerge, they are either fed directly into the boilers, sent to a working storage bunker with a 300-ton capacity, or loaded onto a truck for transport to a longer-term storage facility or another on-site application.

According to the engineering consultant Miles, other plants have even experimented with cofiring coal and straw. "To grind it, we installed a unique system from Warren & Baerg that can handle any size bale up to 4 feet x 4 feet x 8 feet long. It grabs a bale and automatically removes the twine holding it together by running it through a destringer. The machine then grinds down the straw, first to a 2-inch vertical size and then to about &frac14; inch. Finally, the straw — now fuel-sized — is sent 1,500 feet to the boilers, where it is mixed with coal and burned. It’s a very efficient system."

Aside from its automatic destringer, one notable feature of the grinding machine is its horizontal feed, which allows large round bales to be processed quickly, at ground level. Another is its air-removal system, which greatly reduces dust.

Is Cofiring Here to Stay?

The first tests of cofiring wood and coal were conducted in 1979. In the early 1980s, cofiring became popular, but then waned. The technique regained its popularity in the early 1990s, only to fall out of favor again.

Now, with interest growing in reducing global warming worldwide, it appears cofiring is back once more. In the U.S., mandates to use more renewable fuels and possible caps on CO 2 emissions could make cofiring quite appealing to coal-fired utilities. Improved technologies for handling biomass and nonrecyclable wastes have only added to this momentum. Here’s hoping the advances will provide the economic efficiencies needed to make cofiring of coal and biomass and nonrecyclable waste as sustainable as the supply of renewable fuels.