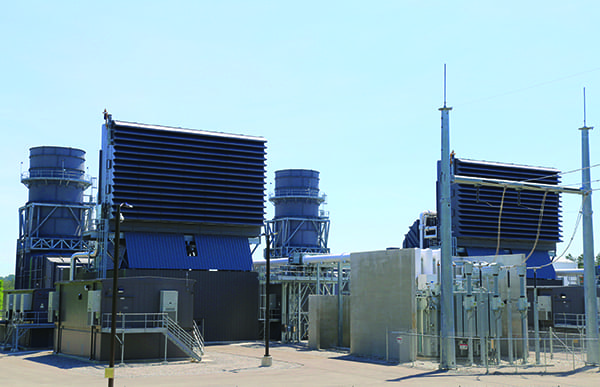 Wolverine Power Cooperative’s Alpine plant in Michigan has impressive operating numbers, and a culture of teamwork dedicated to maintaining efficiency.

Power plant operators will tell you it takes a team effort to run a successful generation facility. It’s no secret that the most-efficient and most-dependable plants have a culture built around a “can do” attitude, with workers moving toward a common goal of providing reliable power to the areas they serve.

Wolverine Power Cooperative, based in Cadillac, Michigan, and serving members in Michigan’s lower peninsula, has made teamwork part of its culture. That culture is evident at Wolverine’s Alpine Power Plant, a 432-MW gas-fired station recognized as one of the state’s most-efficient generation facilities.

“Alpine Power Plant’s greatest asset is the group of employees who are committed to serving their members,” Dan Calverley, vice president of generation for Wolverine, told POWER. “They demonstrate shared vision, expertise, ingenuity, and pride in their drive to continuously provide world-class and record-setting performance.”

The plant’s performance metrics, which include what Calverley called “an industry-leading and unprecedented 337 combined starts in 2018,” make it a worthy recipient of a POWER Top Plant award. But Alpine is more than just its numbers.

“You would have to look far and wide to find another team [Figure 1] that could compare to the exceptional commitment and work ethic [our employees] bring to Wolverine,” Calverley said. “They have an unending thirst for knowledge and take pride in their facility. It’s only through their efforts and dedication that Alpine is the plant it is.”

Alpine is the largest of Wolverine’s seven gas-fired peaker power plants across Michigan, which together can produce about 1 GW of electricity. Wolverine also has hydro and solar power resources, in addition to fractional interests in three coal-fired power plants in Michigan, Indiana, and Ohio. Wolverine also has 200 MW of wind power, produced at two wind farms in Huron County, Michigan. Today, Wolverine and its members lead all Michigan utilities with the highest percentage of new renewable energy with 20% in its portfolio.

Though it’s located in a rural area—something that can be said of most everything in northern Michigan—Alpine has an optimal location for a gas-fired plant, as its sits at the intersection of a TransCanada pipeline that carries natural gas across the state, and vital electrical transmission arteries.

“We spent three years studying our options before firming up a plan” for the Alpine plant, Eric Baker, Wolverine president and CEO, said in 2018 after the plant was brought online. “The location we picked in Elmira Township is right on top of two natural gas lines and near the transmission needed to move the power onto the grid. The technology meets our key strategic issues of flexibility and a clean environmental footprint, and gives us the option of converting to combined cycle down the road.”

Construction of Alpine began in April 2015 and was completed just 14 months later, in June 2016. Baker, at the time, said, “I want to reiterate my praise for the Wolverine employees. Power plant chiefs, operators, engineers, and technicians across Wolverine’s system contributed essential skills and knowledge to bring us this far. In addition, Wolverine’s engineering and operations personnel offered vital commissioning support to hunt down and fix a number of typical commissioning nuisances, and to prepare the transmission network for start-up.”

Said Calverley: “Wolverine decided to build the Alpine Power Plant to ensure clean, reliable, competitive power supply for its members, and for Michigan, which was facing a capacity shortfall at the time. With falling gas prices and technological advancements in natural gas generator efficiency and output, Alpine was built to ensure that Wolverine’s members received the most efficient and sustainable power supply. The plant increased much-needed capacity and also provides vital grid support for Northern Michigan.”

Idaho-based POWER Burns and Roe, a division of POWER Engineers, was selected to provide detailed design engineering and procurement support for the plant. At the time, Gerry Murray, executive vice president of POWER Engineers, said, “This was a great project that demonstrated many of our combined capabilities. In awarding POWER [Engineers] this project, Wolverine has displayed their confidence in our ability to perform quality work in an efficient and timely manner. We look forward to continuing our long-term relationship with Wolverine.”

Wisconsin-based The Boldt Company served as general contractor for the power island equipment, responsible for the civil, electrical, and mechanical construction of the turbines. Trenton, Michigan-based E.C. Korneffel installed the foundation pilings for the two GE gas turbines. The 360 auger-cast piles help maintain a stable foundation for the turbines, which each weigh about 500 tons. Each turbine sits on a five-foot-thick slab of concrete; about 800 cubic yards of concrete was poured for the construction of the two turbine foundations.

The plant’s operation is handled by a staff of 10 full-time employees, “including a plant manager, chief operator, maintenance and instrument and communication technician, and seven maintenance operators,” said Calverley. “Contractors are not regularly present because the team has a ‘do-it-ourselves’ attitude and capability to self-perform nearly all the plant’s robust predictive and preventative maintenance. This enables them to forego long-term service agreements. In fact, 95% of the plant’s work orders are for preventative/predictive maintenance—a unique practice that serves as the basis for the team’s impressive performance.”

Alpine’s impact on its surrounding community goes beyond its power generation. Calverley noted, “Wolverine is a leading provider of tax revenue for Elmira Township, and provides economic benefit to Gaylord and Otsego County, providing millions of dollars in tax revenue each year. In addition, the Alpine construction site hosted 300 workers who also contributed to the local economy. Lastly, building reliable power in Michigan strengthens its ability to attract businesses who will locate to areas where robust power supply is available, reliable, and cost-competitive.”

Tony Anderson, general manager of Wolverine member Cherryland Electric Cooperative, shared what the project means to its members. “Wolverine and its members are proud to be leaders when it comes to providing long-term solutions for Michigan’s energy capacity. Old coal plants are retiring, leaving a void that new power plants can and need to fill. Adding Alpine’s output to Michigan’s energy supply will help maintain affordable rates in the midst of coal plants retiring, by giving us an additional option when market rates fluctuate. Michigan’s energy future is secured in part because of projects like the Alpine Power Plant. We hope our members are as excited as we are to see electric bills stay low and quality of life stay high!” ■