Those aren’t my words—it’s the title of a 2005 article, brought to my attention by Cal Beisner, which uses probability theory to "prove" that "…most claimed research findings are false." While the article comes from the medical research field, it is sufficiently general that some of what it discusses can be applied to global warming research as well.

I would argue that the situation is even worse for what I consider to [be] the central theory of the climate change debate: that adding greenhouse gases to the atmosphere causes significant warming of the climate system. Two corollaries of that theory are that (1) the warming we have seen in recent decades is human-caused, and (2) significant warming will continue into the future as we keep using fossil fuels.

The first problem I see with scientifically determining whether the theory of anthropogenic global warming (AGW) is likely to be true is that it is a one-of-a-kind event. This immediately reduces our scientific confidence in pinpointing the cause of warming. The following proxy reconstruction of temperature variations over the last 2,000 years suggests global warming (and cooling), are the rule, not the exception, and so greenhouse gas increases in the last 100 years occurring during warming might be largely a coincidence (see figure). 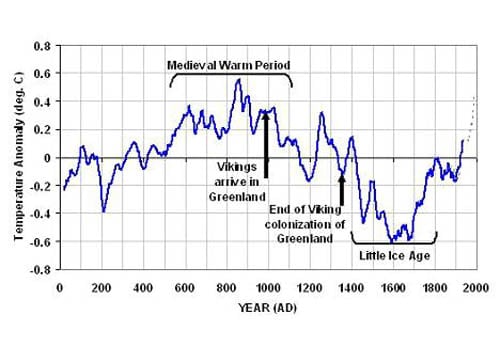 Mean global temperature reconstruction based on 18 non-tree-ring proxies, to 1935. Only 11 proxies cover the period after 1935, dotted line. "A 2,000-Year Global Temperature Reconstruction Based on Non-Treering Proxies," Dr Loehle, Ph.D., National Council for Air and Stream Improvement.

Twice I have testified in congress that unbiased funding on the subject of the causes of warming would be much closer to a reality if 50% of that money was devoted to finding natural reasons for climate change. Currently, that kind of research is almost non-existent.

A second, related problem is that we cannot put the Earth in the laboratory to run controlled experiments on. Now, we can determine in the laboratory that certain atmospheric constituents (water vapor, water droplets, carbon dioxide, methane) absorb and emit infrared energy…the physical basis for the so-called greenhouse effect. But the ultimate uncertainty over atmospheric feedbacks—e.g. determining whether cloud changes with warming reduce or amplify that warming—cannot be tested with any controlled experiment.

A third problem is the difficulty in separating cause from effect. Determining whether atmospheric feedbacks are positive or negative requires analysis of entire, quasi-global atmospheric circulation systems. Just noticing that more clouds tend to form over warm regions does not tell you anything useful about whether cloud feedbacks are positive or negative. Atmospheric and oceanic circulation systems involve all kinds of interrelated processes in which cause and effect must surely be operating. But separating cause from effect is something else entirely.

For example, just establishing that years experiencing global warmth have less cloud cover letting more sunlight in does not prove positive cloud feedback…simply because the warming could have been the result of—rather than the cause of—fewer clouds. This is the subject that Andy Dessler and I have been debating recently, and I consider it to be the Achilles heel of AGW theory.

After all, it is not the average role of clouds in the climate system that is being debated—we already know it is a cooling effect. It’s instead how clouds will change as a result of warming that we are interested in. Maybe they are the same thing (which is what I’m betting)…but so far, no one has found a way to prove or disprove it. And I believe cause-versus-effect is at the heart of that uncertainty.

A fourth problem with determining whether AGW theory is true or not is closely related to a similar problem medical research has—the source of funding. This has got to be one of the least appreciated sources of bias in global warming research. In pharmaceutical research, experimentally demonstrating the efficacy of some new drug might be influenced by the fact that the money for the research came from the company that developed the drug in the first place. This is partly why double-blind studies involving many participants (we have only one: Earth) were developed.

But in global warming research, there is a popular misconception that oil industry-funded climate research actually exists, and has skewed the science. I can’t think of a single scientific study that has been funded by an oil or coal company.

But what does exist is a large organization that has a virtual monopoly on global warming research in the U.S., and that has a vested interest in AGW theory being true: the U.S. Government. The idea that government-funded climate research is unbiased is laughable. The push for ever increasing levels of government regulation and legislation, the desire of government managers to grow their programs, the dependence of congressional funding of a problem on the existence of a "problem" to begin with, and the U.N.’s desire to find reasons to move toward global governance, all lead to inherent bias in climate research.

At least with medical research, there will always be funding because disease will always exist. But human-caused warming could end up being little more than a false alarm…as well as a black eye for the climate research community. And lest we forget, possibly the biggest funding-related source of bias in climate research is that research community of scientists. Everyone knows that if the AGW "problem" is no longer a problem, their source of research funding will disappear.

Sometimes I get accused of being a conspiracy nut for believing these things. Well, whoever accuses me of that has obviously not worked in government or spent much time dealing with program managers in Washington. There is no conspiracy, because these things are not done in secret. The U.N.’s Agenda 21 is there for all to read.

The bottom line is that there could scarcely be a more ill-posed scientific question than whether global warming is human-caused: a one of a kind event, the Earth can’t be put into a laboratory to study, cause and effect are intermingled, and the political and financial sources of bias in the resulting research are everywhere.

So, when some scientist says we "know" that warming is human-caused, I cringe at the embarrassing abundance of scientific ignorance on display. No wonder the public doesn’t trust scientific predictions—just as suggested by the 2005 study I mentioned at the outset, those predictions have almost always been wrong!

-Roy Spencer is a research scientist at the University of Alabama at Huntsville, where he is U.S. science team leader for the Advanced Microwave Scanning Radiometer flying on NASA’s Aqua satellite. Before joining the UAH faculty, he was he was a senior scientist for Climate Studies at NASA’s Marshall Space Flight Center, where he and Dr. John Christy received NASA’s Exceptional Scientific Achievement Medal for their global temperature monitoring work with satellites. This article first appeared on his web site.