POWER reported on the latest Twist Automatic Engine (Figure 1) in its cover story for the May 1885 issue. The editor explained that "each end of the cylinder has one main valve, for admission and exhaust, and one cut-off valve; all being plugs with partial rotary movement; and the cut-off valves being within and concentric with the main valves and having double openings, so as to reduce the necessary amount of travel of throw nearly one-half. 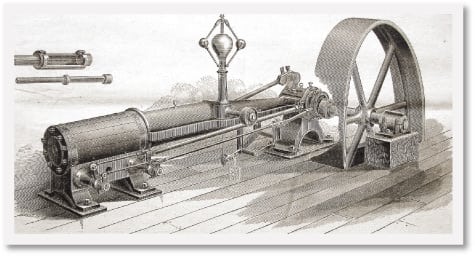 1. In 1885 the Twist Automatic Engine was the latest of many models of reciprocating engines to be marketed in the U.S.

"The valves have the steam chest pressure upon their backs. The main valves are actuated by drivers having hollow steam passing through bonnets in the chest."

In the "nothing is new under the sun" category, the editors noted the recent publication of a book titled Windmill as a Prime Mover. "In this work, covering 200 pages and 40 illustrations, will be presented the main facts relating to the history, development, design, construction, and performance of windmills. Special attention is given to the American windmill, and to a consideration of its economy as compared with that of other prime movers."

POWER editors visited the Potomac Electric Power Co.’s new power plant "located on the Bennings road where it crosses the eastern branch of the Potomac river. The new plant will "supplement existing plants and it will be confined entirely to the generation of alternating current. This will be transmitted through comparatively small mains and be transformed at any or all of the nine sub-stations" (Figure 2). 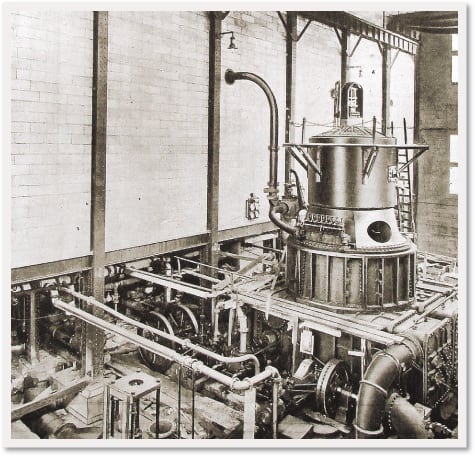 2. The Potomac Electric Co. began construction of a new power plant to serve the residents of Washington, D.C.

The plant consists of "16 boilers arranged in four rows, two boilers forming one battery. They are of the Babcock & Wilcox make, having a heating surface of 6040 square feet each, designed for 175 pounds working pressure and equipped with super heaters of 1180 square feet capable of superheating the steam to 150 F. The boilers are provided with Roney stokers, each having a grate area of 111.8 square feet.

"The first turbine installed, a 5000-kilowatt unit has been operating since the early part of December (Ed: 1906). The two 2000-kilowatt turbines which are to be installed are not new, and are at present operating in the company B street plant. One of these is the unit that was exhibited by the General Electric Company at the World’s Fair, St. Louis. It is provided with a base condenser, while the other unit has a separate condenser, but will, however, be designed in order to have the entire equipment uniform."

"The 75,000-kw., 1,800-r.p.m. turbine-generator to be installed at unit No. 6 at the Kearny station of the Public Service Electric & Gas Company of New Jersey, is shown on test at the Westinghouse plant in South Philadelphia. Operating at 350 lb. pressure and 750 deg. F. total temperature, the new unit will receive part of its steam from the mercury-vapor condensers [serving] the 20,000-kw mercury unit also being installed [emphasis added]. The major portion of the steam supplying the 75,000-kw. turbine, however, will come from the existing boiler equipment at the Kearny station" (Figure 3). 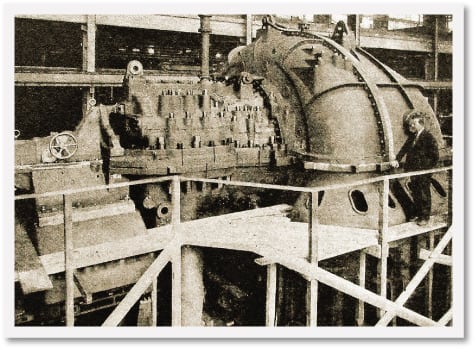 3. A 75,000-kW turbine under test by Westinghouse for Public Service Electric & Gas Co. of New Jersey.

Yes, you read that excerpt correctly—mercury vapor turbines. Several were built in the 1920s, including one for Hartford Electric Light Co. The concept was developed by William Le Roy Emmet of General Electric Co., and GE built the machines. Mercury vaporizes at 675F and the saturation pressure at 884F is only 70 psig. Mercury vapor has a much higher energy density than water, which means that the size of the equipment can be much smaller for a given power output.

It’s hard to imagine a mercury vapor power plant ever operating in the U.S. I wouldn’t even visit the plant while operating. Would you? 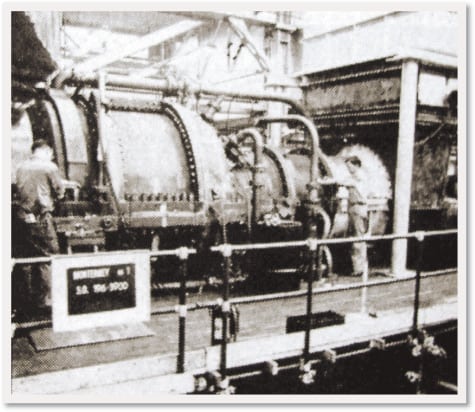 4. A 16,000-kW General Electric gas turbine, reputedly the largest in the Western Hemisphere at the time, under test in Schenectady, N.Y.

"This is the first of two 16,000-kw gas turbines ordered from the Gas Turbine Department by the Planta Electrica de Grupo Industrial in Monterrey, Mexico. This organization furnishes electricity to a complex of industrial concerns in the greater Monterrey area."

"The units are of GE’s simple-cycle, single-shaft design. Nominal rating of 16,000 kw is for operation at a temperature of 80F with a compressor inlet air pressure of 14.17 psia. Natural gas will be burned as fuel. Units will drive hydrogen-cooled generators rated at 17,647 kva. They were sold through the International General Electric Co, the company’s foreign marketing organization, and are scheduled to be in operation by mid-1957."

In a separate report, POWER editors noted that "a venture which may lead to the nation’s first geothermal power development was launched in San Francisco with the formation of Thermal Power Co.

"The firm plans to drill three wells in the Big Geysers area near [Healdsburg], Calif, to determine whether it would be economic to tap the geothermal steam resources there for running power plant turbines.

"If the results are favorable, the firm hopes to reach an agreement with Pacific Gas & Electric for sale of Power to the utility."

PG&E has indicated Thermal would have to build a plant w capacity of at least 12,500 kw to justify construction of a transmission line."