Flyash and condensed sulfur trioxide (SO3) are the major components of flue gas that contribute to the opacity of a coal plant’s stack emissions (stack opacity). Estimates are that 75% to 85% of bituminous coal-fired plants with selective catalytic reduction (SCR) and/or wet flue gas desulfurization (FGD) systems are likely to produce enough SO3 vapor and mist to make their emissions opaque. Plants fueled by subbituminous coal and lignite do not have the same problem.

SO3 -related stack opacity problems — including the phenomenon known as "blue plume" — will become more prevalent as more coal plants are retrofitted with pollution control equipment to meet increasingly lower sulfur dioxide (SO2) and nitrogen oxide (NOx) emissions limits. To date, the most notable instance of blue plume occurred in 2000 at American Electric Power’s 2,600-MW General Gavin Plant in Ohio. Following the installation of SCR units there, the plant’s SO3 emissions doubled. (See "AEP Pioneers and Refines Trona Injection Process for SO3 Mitigation"  to learn how the utility solved this problem.)

This article describes technical assessments by Science Applications International Corp. (under contract to the U.S. Department of Energy’s National Energy Technology Laboratory) of the mechanisms and consequences of SO3 formation in coal-fired plants to which SCR or FGD systems, or both, have been added. The authors and editors hope that the results of this work — better estimates of the total number of plants expected to experience stack opacity — will call attention to the size and scope of the problem and thereby foster development of cost-effective solutions to it.

Source of the Problem

There are three main components of particulate matter (PM) in the flue gas of a coal-fired power plant that reaches the stack: particles of flyash that make it past the electrostatic precipitator (ESP) or fabric filter (FF), solids carried over from the wet FGD system, and condensable sulfuric acid (H2SO4) aerosols. The H2SO4 is a product of the reaction of SO3 and water that occurs as the flue gas cools across the air heater (Figure 1). 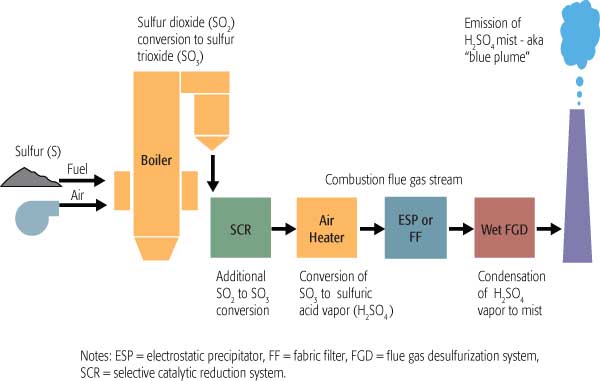 1. Where SO3 and H2SO4 are formed in a bituminous coal-fied power plant. Source: National Energy Technology Laboratory

Plants that burn coal with medium to high sulfur content and that are equipped with wet FGD systems are particularly prone to experiencing sulfuric acid-related stack opacity problems. That’s because the gaseous H2SO4 is condensed to an aerosol mist before the wet FGD system, which cannot remove it as readily as it can SO2. Most reports indicate that a wet FGD system can only remove 50% of the H2SO4 entering it, at best.

SO3 emissions from coal-fired power plants are extremely variable and can range from less than 1 ppm to over 30 ppm. Although SO 3 emissions are not directly regulated, their contribution to PM may require their control to meet stack opacity limits.

Whether a particular level of SO3 emissions is considered a problem or not depends on numerous plant-specific factors. Flue gas exit temperature, the configuration and performance of particulate and pollution control equipment, and ambient weather conditions, can all influence the tolerable level of SO3 emissions. Even the plant’s stack diameter can come into play. A small plant with a small stack may be able to tolerate a larger concentration of SO3 without exceeding opacity limits.

The number of existing coal-fired plants equipped with wet FGD systems that are likely to experience stack opacity problems can be estimated based on the sulfur content of their fuel, as well as on a few assumptions about the production and capture of SO3 in the flue gas stream as it moves from the furnace to the stack.

The methodology (Figure 2) for determining the percentages of generating capacity likely to suffer stack opacity problems relied on extrapolating cumulative distribution curves of coal sulfur content for plants equipped with wet FGD systems (the upper curve of Figure 3). Here, the conservative assumption was that any plant with an SO3 level of greater than 5 ppm at the exit of the stack could experience an opacity problem. The SO3 production and capture assumptions were as follows: 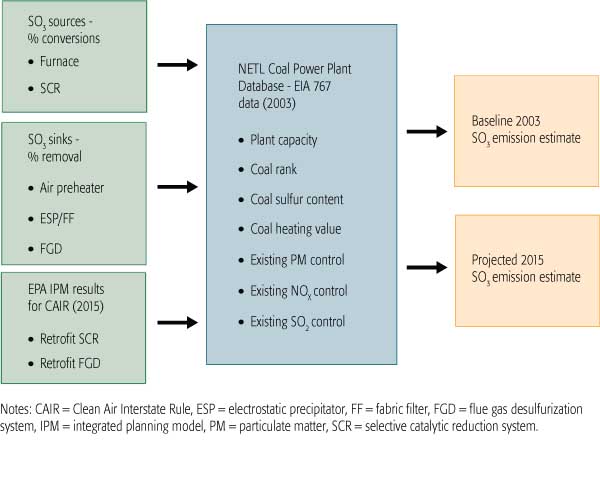 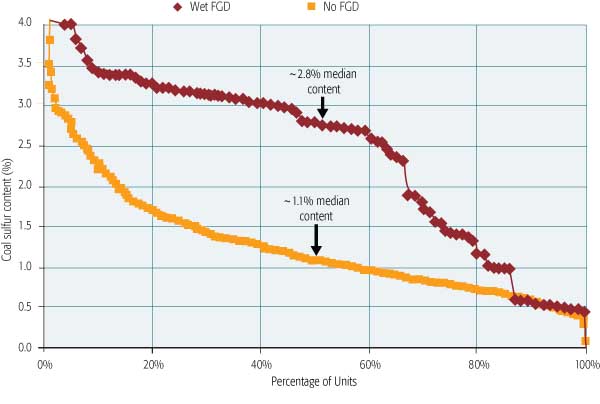 3. The distribution of sulfur content in bituminous coal for existing plants with and without a wet FGD system. Source: National Energy Technology Laboratory

Based on this analysis, the average stack SO3 concentration for today’s bituminous coal-fired capacity equipped with a wet FGD system was calculated to be approximately 10 ppm. About 65% of these plants would be likely to exceed a 5-ppm stack SO3 concentration (compared with 0% for subbituminous and lignite plants). A similar analysis was conducted for units equipped with both a wet FGD system and an SCR system for NOx control. The same assumptions as above were made, except that there would be an additional 1% conversion of SO2 to SO3 by the SCR catalyst in bituminous coal-fired plants.

As a result of the higher SO3 production, today’s bituminous coal-fired capacity equipped with SCR and wet FGD systems would have an estimated average stack SO3 concentration of over 25 ppm. About 98% of such plants can be expected to have stack SO3 concentrations exceeding 5 ppm (Figure 4). The impact of SCR-related SO3 emissions for subbituminous and lignite plants is assumed to be negligible as a result of SO3 adsorption by the alkaline flyash. 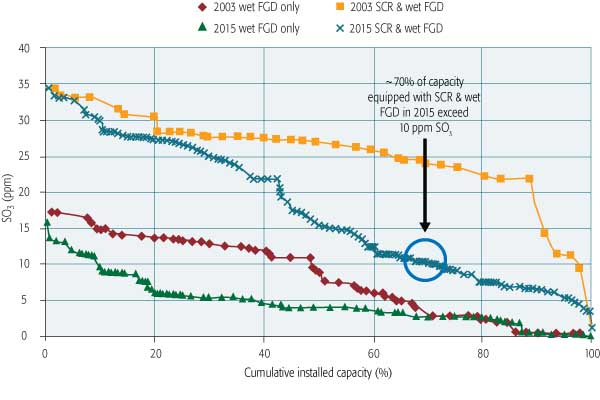 4. Estimated SO3 emissions of bituminous coal-fired plants equipped with a wet FGD system alone, and plants retrofitted with both an FGD and an SCR system. Source: National Energy Technology Laboratory

The use of FGD and SCR at coal-fired power plants will increase significantly over the next 15 years with implementation of the Clean Air Interstate Rule (CAIR), which establishes a cap-and-trade program for reducing emissions of SO2 and NOx in 28 eastern states and the District of Columbia. The implementation will be done in two phases, with Phase I compliance dates of January 1, 2009, for NOx and January 1, 2010, for SO2, and a Phase II compliance date of January 1, 2015, for both NOx and SO2.

To comply with the stringent SO2 limits of CAIR, many coal-fired plants will be required to install FGD systems. The U.S. EPA estimates that by 2020 more than 231 GW of installed capacity will be equipped with scrubbers — more than double today’s 100 GW. Most of these scrubbers are expected to be wet.

The EPA also estimates that by the same year, SCR systems will have been installed on 154 GW of capacity to comply with both CAIR and the NOx "SIP Call" rule. The proliferation of wet FGD and SCR systems will only exacerbate the problem of excessive SO3 emissions, making the need for cost-effective SO3 reduction technologies even more urgent.