Operating a coal-fired plant of any sort in India is a challenge these days, but Sesa Sterlite’s 1,215-MW plant is also tasked with supplying vital power to an adjacent aluminum smelter. Despite a difficult regulatory environment and ongoing coal market difficulties, the plant has not just met expectations but has risen well above them. 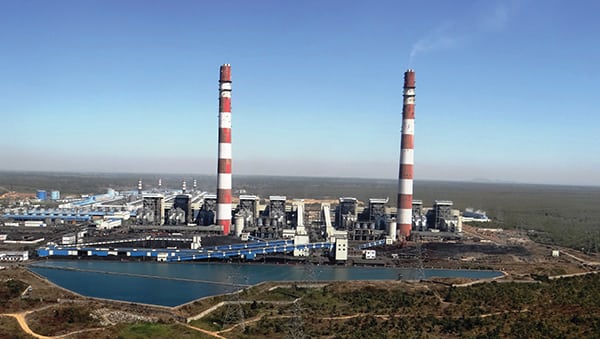 This is a tough time to be running a business as power-intensive as aluminum smelting in India.

The economic boom that has lifted many of the nation’s 1.2 billion citizens out of persistent poverty has deeply challenged its ability to meet their electricity demands. Despite significant advances over the past two decades, one-quarter of the country—roughly 300 million people—still lacks access to electricity. Yet India has the world’s third-largest installed capacity after the U.S. and China, and is the fourth-largest electricity consumer after the U.S., China, and Russia.

Many of India’s problems stem from a dependence on coal. Despite efforts to foster wind and solar energy (see “Despite Challenges, India Banks on Renewable Energy” in the May 2014 issue) and other resources such as hydropower, coal still accounts for nearly 60% of the nation’s installed capacity. Though India has abundant coal resources, it has been unable to produce enough to meet its needs, leading to persistent fuel supply challenges.

In April 2012, the national government took the unusual step of ordering national coal supplier Coal India to sign supply agreements with power generators, threatening penalties if supplies fell below 80% of its commitments. India’s chronic coal shortages have stemmed from a mix of domestic problems—many coal deposits are located in protected areas or tribal regions—and heightened competition from other coal-consuming Asian nations such as China. Even coal export behemoth Indonesia has recently looked at cutting its exports to meet domestic power demand (see “Indonesia Eyes Tightening Coal Exports” in the August 2014 issue). The result has been a national coal deficit in India that has exceeded 100 million metric tons a year.

Even the Mundra plant has struggled with profitability after the government voided its coal supply agreement with Indonesian producers, a move that caused its fuel costs to nearly triple. Problems such as these have left investors skittish about funding generation projects despite government efforts to relax capital requirements for bidding.

The nation has also struggled with its transmission infrastructure. The widely publicized blackouts in July 2012 that knocked out power for more than 60% of India’s population, including most of Odisha State, were blamed on inadequate interregional transmission and poor grid management. Nationwide, transmission losses are estimated to be about 24%, according to India’s Central Electric Authority, well above levels in developed countries.

Aluminum smelting is one of the most power-intensive industrial processes. The primary method used, the Hall–Héroult process, involves heating a mixture of aluminum oxide and other compounds with electric current in a smelting cell until the molten aluminum separates out. Not only does this method consume enormous amounts of electricity, but the cells also must be continually heated or the mix of materials will solidify and the cell will be useless until repaired. This means a power loss across an entire plant could spell disaster, which is why aluminum smelters are typically located near large power plants.

London-based Vedanta Resources is a globally diversified natural resources company with operations in India—where it is the nation’s largest mining firm—Australia, South Africa, Namibia, and other countries. Vedanta subsidiary Sesa Sterlite Ltd. (SSL) is one of the country’s largest commercial power producers as well as a major natural resources firm. Since the mid-2000s, SSL has been developing a huge aluminum production zone in Jharsuguda in the eastern state of Odisha. Initial plans envisioned a 0.5 million metric tons per annum (mtpa) smelter, to be eventually expanded to 2.6 mtpa (Figure 1). Odisha has abundant reserves of both bauxite (aluminum ore) and coal. Phase 1 of the project, comprising the 0.5-mtpa smelter, was completed in 2009, while Phase 2, a 1.25-mtpa expansion, was completed in 2011.

Such a massive project would have equally massive power demands, and relying on the national grid for power, even if it came from a nearby plant, would be risky. To ensure reliable operations would mean building a captive power plant to supply the project directly. SSL soon drew up plans for what would be the largest captive power plant in the entire country.

Construction began in 2005, and the first unit, Unit 3, came online in July 2008. The last of nine units came online in early 2010. The project was completed without a single lost-time accident.

The plant’s environmental controls are among the most advanced in India. Fly ash is captured with electrostatic precipitators and fabric filters and is recycled for use in road construction and fill.

The plant is the first coal-fired unit in the country to employ high-concentration slurry disposal of dry and bottom ash. This system combines both ash streams into a mostly solid slurry to reduce water consumption and fugitive dust, as well as requiring a smaller footprint compared to conventional ash-handling systems. The high concentration of solids means the slurry forms a natural slope in the disposal area without the need for mechanical spreading.

The plant employs counter-flow forced cooling towers and multi-flue stacks. Process water is sourced from the nearby Hirakud Reservoir, while coal is supplied from the Mahanadi Coal Fields outside Jharsuguda.

Since coming fully online, the SSL’s captive power plant has received numerous honors for excellence in operations and energy efficiency. It has received the National Energy Conservation Award bestowed by the Bureau of Energy Efficiency in 2011 and 2012, and in 2013 received both the Confederation of Indian Industry’s National Award for Excellent Energy Efficient Unit and the India Power Award from the Council of Power Utilities. The overall Jharsuguda operation was also honored for its commitment to sustainability with a Green Manufacturing Excellence Award from consulting firm Frost & Sullivan.

These honors have come in large part from the plant staff’s relentless drive to improve the plant heat rate and cut its fuel consumption. The overall plant heat rate has been reduced from 10,627 Btu/kWh in 2010 to 9,591 Btu/kWh in 2013, an impressive achievement for a subcritical plant. Coal consumption has been cut from 893 grams per kilowatt-hour (g/kWh) to 806 g/kWh over the same period.

Environmental performance has also been improved. Upgrades to reduce particulate emissions have cut them from 181 mg/m3 in 2010 to under 30 mg/m3 currently.

The plant’s biggest challenge, not surprisingly, has been finding adequate fuel to operate. To address its fuel challenges and increased costs of imported coal, SSL has begun blending and burning coal purchased in spot-market auctions. This approach allows it to balance its fuel costs depending on the price of imported coal. Currently, the plant burns up to 70% auction coal, and future plans are to maximize this approach to reduce overall fuel costs.

The plant has also gone beyond the call of duty in other ways. Thanks to its reliable, efficient generation, the adjacent 0.5-mtpa smelter has been able to run above rated capacity despite continuing difficulties with the local grid. Meanwhile, the 1.25-mtpa expansion has been unable to start up because of ongoing disputes with the Odisha state government over tariffs on the power it would be using from SSL’s 2.4-GW independent power plant in the same industrial zone, but because the captive power plant has a 100-MW surplus, Vedanta officials said in the company’s second quarter 2014 earnings call that it plans to begin limited operations at the larger smelter this year using power from the captive plant.