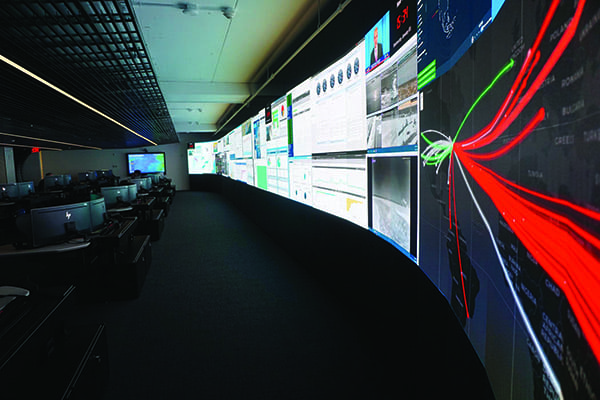 The New York Power Authority (NYPA), the largest state-owned public power system in the U.S., is on the path to achieve its goal of becoming the world’s first digital electric utility. The starting point for that is NYPA’s Integrated Smart Operations Center—or iSOC—located at the utility’s White Plains, New York, headquarters.

Opened last December, the center monitors in real time NYPA’s 16 power plants and 1,400 miles of transmission lines. The iSOC collects data from 24,000 sensors spanning the state-power system and feeds it into a state-of-the-art computer system. There analysts and engineers, using GE’s predictive analytic software called Predix, can look at the real-time performance of the equipment in its system and compare that to predicted performance, spotting problems often well before conventional, scheduled preventive maintenance would pick them up. The data shows up on an impressive 81-square-foot visual wall on the eighth floor of NYPA’s White Plains office.

Investment in Digital Pays Off

The iSOC was designed from the start to be scalable, according to Richard Gaines, iSOC’s director. He told POWER back in December that the system has no limit to the amount of data it can handle, and built-in communications technology can alert key NYPA personnel of anomalies at any time.

“This is an exciting milestone in our digital journey,” said Gil Quiniones, NYPA president and CEO (Figure 1). The iSOC, he said, “will become the new standard in utility asset management and help us fulfill our core mission to provide power to our customers that is both low in cost and reliable.”

Quiniones told POWER in May that the economics of the system have been exceptional. “We invested about $7 million to build the iSOC,” he said. “We have catalogued how much we have saved, how much we have made in terms of avoided costs, and that comes to over $5 million since December.”

A key to the NYPA smart operations system is “digital twin” or “digital avatar” technology. It takes the data from the actual equipment, derived from conventional data sources such as supervisory control and data acquisition (SCADA) equipment and a network of sensors, and compares it to how the equipment should work based on the manufacturers’ claims. These “decision support systems,” Quiniones said, “gather the information, do the analytics, and come up with actionable insights that we pass along” to the actual equipment controllers.

This approach, Quiniones said, provides big benefits as “our engineers and analysts at headquarters are talking constantly with the people who operate our plants and transmission system. The constant interaction has been great.” Quiniones added, “We are finding out we are making better decisions to prioritize our capital and [operations and maintenance] investments, based on prediction. We don’t just look at the manufacturers’ manual, but base our actions on the actual health of the component.” In addition to the day-to-day savings of $5 million in five months, “We have avoided suboptimal investments of around $170 million,” he said.

There’s an App (Or Soon Will Be) for That

The iSOC has also opened up a new line of business for NYPA: computer applications (apps) developed around the system. NYPA has a long-term agreement with GE for development of apps for the Predix software. Separately, the power system is also working with the Electric Power Research Institute and others on apps.

One app NYPA has developed targets a specific problem the utility faces. It monitors ships traveling on Long Island Sound. NYPA has an underground, undersea 600-MW transmission cable from Westchester County to Long Island. In the past, ships have dropped anchor and severed the transmission line. The utility has created an app that monitors the ship traffic. When a ship gets too close to the path of the NYPA power line, the app can then send a message: “Do not drop your anchor.”

“This is a great money-saving device,” Quiniones told POWER. “A repair costs $40–$45 million and the line is out for six months. Now we are getting calls from entities who own submarine infrastructure: ‘Can we buy the app?’ ” NYPA earns royalties from its apps.

Evolution of a Smart Energy System

The genesis of the iSOC came in 2012–2013, when the public power system worked on a long-term strategic plan. NYPA was facing problems such as transformer failures and other elements of an aging system. At that time, Quiniones said, utility strategic planners were also seeing a trend “in changes in computing power plus advanced software and analytics, power electronics, and sensors. That catalyzed our thinking.”

NYPA turned to GE in 2016 for software support for its nascent smart control system. Ganesh Bell, GE Power’s chief digital officer, said, “With this deployment, NYPA is pioneering change in the digital transformation of the electricity industry. GE’s Asset Performance Management application on the Predix platform will unlock the value of existing data to impact machine health and reliability.”

As NYPA moved forward with its iSOC, said Quiniones, cybersecurity concerns were also part of the background. “At the same time,” he said, “cybersecurity was becoming more front and center. Everything we do, every step of the way, we think about cybersecurity.”

New York politics is also part of the backdrop for the NYPA project, as the utility is a state agency. While NYPA gets no state taxpayer funds and lives on the revenue it generates from conventional utility sales, Gov. Andrew Cuomo appointed Quiniones to lead NYPA. When NYPA dedicated the iSOC in December, Cuomo issued a press release stating, “The initiative is a major milestone in the governor’s ‘Reforming the Energy Vision’ [known among aficionados as REV] strategy to build an energy system that is cleaner, more resilient and affordable and is part of the governor’s investment in clean energy technology and innovation.” NYPA is the lead in the state in implementing REV.

Quiniones said, “We are fortunate here in New York to have a governor who is really pushing us, an entrepreneurial government. It pushes us to be innovative and think outside of the box.” 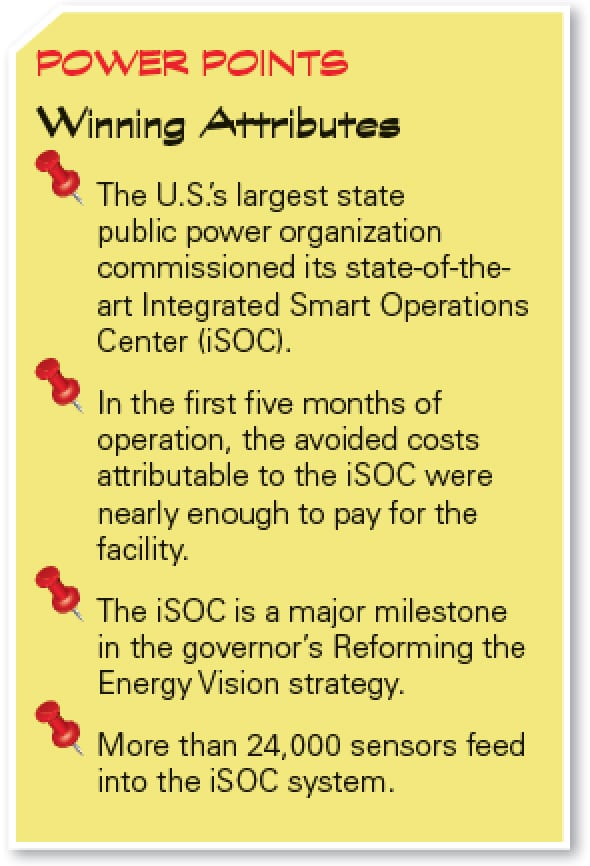 NYPA’s “strategic vision” states, “More than a century after the introduction of commercial electricity, the electricity grid and the role of the utility are being reimagined. NYPA is well-positioned to help our customers take full advantage of all that this new era offers.”

“Looking ahead,” says NYPA, “we will help bring about the flexible, distributed, consumer-driven energy system of the future by investing in the things that customers truly value. NYPA will lead this transformation in concert with our customers.

“On our path towards becoming the first end-to-end ‘digital utility’ in the country we are redesigning how we manage our assets, helping our customers adapt in an ever-demanding business environment, and utilizing innovative digital technologies.”

Ricardo Da Silva, NYPA vice president for strategic operations, said, “We believe digitization will become the new utility norm…embracing the power of advanced data analytics will fundamentally transform the value of NYPA to our customers.” Emilie Bolduc, energy management vice president, said, “Comprehensive analytics on real-time energy data is empowering our customers to take greater control of their energy use,” and Jenny Liu, an energy resource vice president, added, “NYPA is so much more than an asset operator and provider of low-cost electricity, we are a partner with our customers to help them be successful.”

In the next three to five years, Quiniones said, NYPA will be connecting more equipment and systems to its wide-area communications network, “adding a lot more sensors,” and developing apps to take advantage of that telecommunications network and the flow of data from the system. A focus will be gathering and analyzing customer data, he said. “With 11,000 customer buildings, we will be creating digital twins of the energy systems of those buildings.”

Over time, Quiniones said, that will help NYPA and its customers looking to install solar capacity or electric vehicle charging stations, or smart building systems. When NYPA commissioned the iSOC last December, the Fast Company business news website commented that NYPA’s digital direction “will be particularly necessary as the state begins to integrate energy from more renewable sources. Grid instability is one of the biggest concerns about converting to renewables—if there’s, say, a large influx of wind power at a particular time, utilities currently lack the flexibility and insight to be able to seamlessly integrate that new supply into the current system.”

The iSOC, according to Quiniones, will go a long way toward solving that problem, giving the utility the ability to do “what-if” analyses, modeling what would happen if new renewable capacity or a new transmission line were to come onto the NYPA grid. Fast Company commented, “NYPA’s effort to digitize its whole system in order to track exactly how energy flows around the state create the necessary transparency for the utility to begin to integrate more renewables in a methodical, informed way.”

The authority’s path toward digitization will also change the look of the utility’s workforce, according to Quiniones. “Over time, we will require more technicians than electricians,” he said. “It won’t impact our headcount, which may increase. We will still need electricians, and folks to climb poles, and the traditional staff. But we will need a lot more people who know data analytics, power electronics, and information technology.” ■