This supplement to “Strategies for Inspecting HRSGs in Two-Shift and Low- Load Service” in the August issue includes additional discussion of the heat recovery steam generator (HRSG) Inspectors Toolkit and HRSG Inspection Guide sections of the main article plus additional photos of damage caused by rapid startups and two-shifting of units over time.

Many combined cycle plants have aggressively pursued periodic inspections of HRSG component integrity during scheduled combustion turbine (CT) maintenance outages, even though the plants in general have operated significantly few hours than originally assumed. A thorough HRSG inspection provides important information on existing pressure-part condition prior to a transition to either low-load operations, faster starts (high-pressure [HP] drum ramp rates), or from baseload to two-shift cycling.

Inspections alone do not provide sufficient basis for transitions from two-shifting to low-load operation. Engineering evaluations of the HRSG design capability to accommodate the specific load being marketed are essential to confirm that the pressure parts will operate in compliance with ASME Code requirements. One concern is the maximum metal temperature that pressure parts are subjected to during low-load operations.

Upgrades such as GE’s IGP and OpFlex control strategies (see “Managing the Changing Profile of a combined Cycle Plant” in the June 2014 issue) can yield CT exhaust temperatures that are higher than the original plant design. Thermal analysis of pressure part components using a design simulation tool such as KED’s Power Plant Simulator & Designer or proprietary HRSG original equipment manufacturer (OEM) tools is essential to confirm the metal temperatures in HP superheater and reheat (RH) tube panels and related conditions, such as HP evaporator circulation/buoyancy and the implications of duct firing at low load. Inspections of high-temperature components for low-load operations will need to identify increases in the rate of damage so that corrective actions and schedules can be planned.

Such assessments will often include comparison of predicted temperatures with plant data historian archives or temperatures from temporary thermocouples. Operation at higher temperature in Grade 91 components in the HP superheater and RH increase creep damage accumulation while low-load operation means substantially lower pressure, which reduces the operating stresses that propagate creep cracks.

One estimate of these effects is that an increase of 20F may reduce creep life by 50% while a reduction of operating stress by 20% may double creep life. The net effect for a specific HRSG can be determined by an engineering assessment of the proposed low-load operation on high-temperature component life using the methods endorsed by ASME in the FFS-1 Fitness-for-Service Standard, first published in 2007.

Borescope inspections were relatively uncommon in the past for new, large HRSGs due to limited access and the expectation that there was little accumulation of water-side deposits early in life. Ten years ago, borescope inspection was principally applied for steam plant components to conduct inspections of attemperator spray liners for HP steam and RH steam piping.

Today, articulating borescope/videoscope inspections are standard inspection practice for mid-life two-shifting HRSGs. It is an important tool to assess the early accumulation of waterside deposits in HP evaporators before the development of under-deposit corrosion and extensive damage to affected tube panels (Figures 1 and 2). A number of plants, particularly those in cogeneration service, have required panel replacements that might have been avoided had borescope inspections been part of scheduled HRSG inspections. 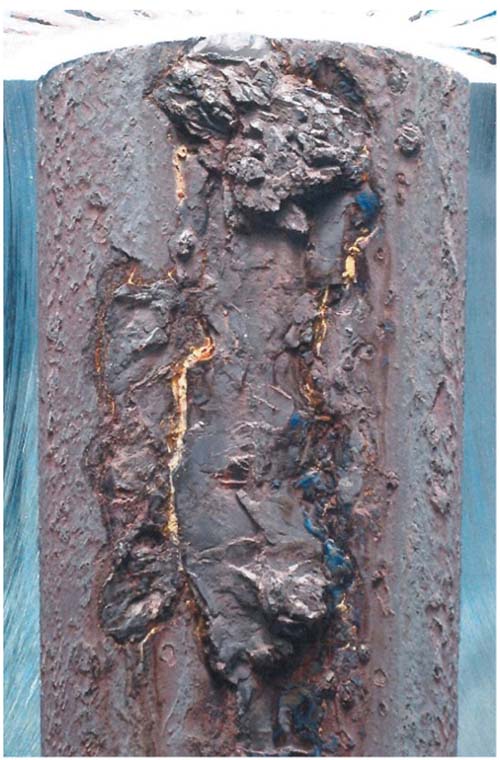 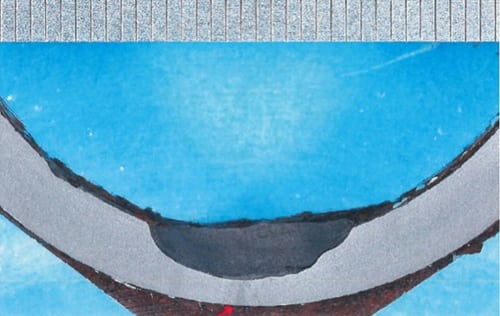 Following are areas of potential trouble that should be checked. 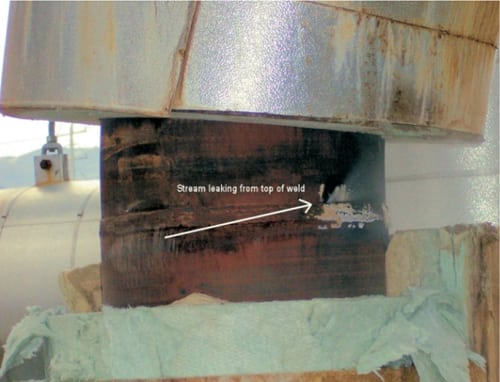 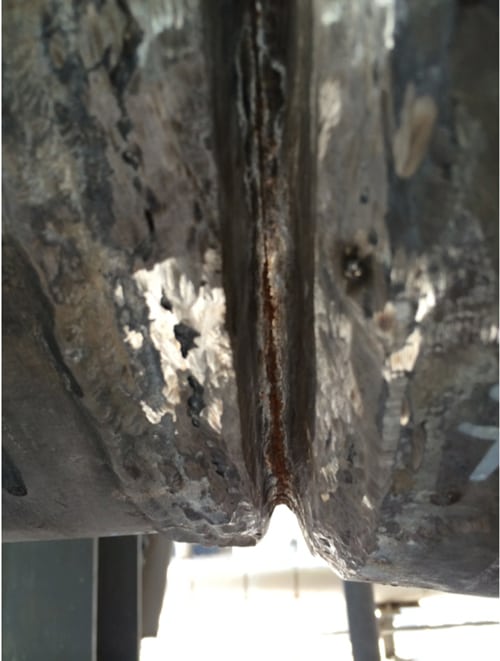 4. This 3×1 combined cycle plant operated on a two-shifting schedule experienced a steam leak due to a weld crack in its 18-inch-diamater main steam pipe. Courtesy: Tetra Engineering Group, Inc.

High-Temperature Tube Leaks and Failures. Tube failures are less common, but have occurred in many large reheat HRSGs. The root causes of these failures varies and depends on many factors, such as material type, thermal/stress conditions during operations, and water hammer. One common cause is tube exposure to high gas temperatures during startup followed by a rapid quenching (resulting in a tensile overload failure) from condensate accumulation or excess attemperation spray (Figures 5 and 6). 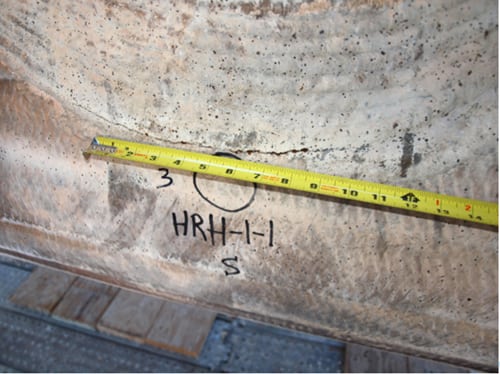 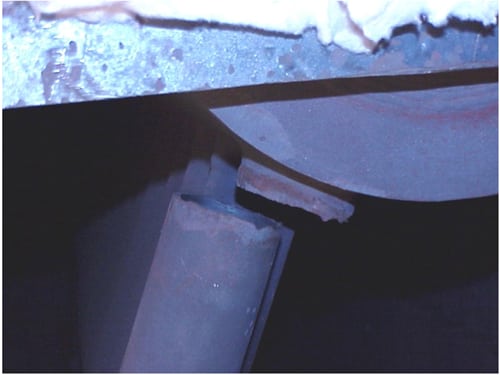 6. A Grade 91 reheater tube failed and separated from its header in this two-shifting plant. Courtesy: Tetra Engineering Group, Inc.

Another well-known cause is corrosion fatigue, which occurs when aggressive water chemistry combines with an inadequate vibration restraint, and a corrosion site rapidly propagates through-wall as a corrosion-fatigue crack.

Casing, Liner, and Gas Baffle Damage. Casing and liner plate damage were common in early large HRSGs, with hot spots typically evident on the casing surface, particularly around doors and anywhere there is insufficient insulation. Liner plates are generally damaged by thermal buckling, usually by caused by the bolting/welding design, overheating in firing ducts (due to radiant heat transfer from burner flames) or from the use of materials with an inadequate temperature rating (Figures 7–9). More recent designs by most HRSG OEMs have significantly reduced the incidence of this type of damage. Most plants with extensive damage have repaired or replaced the affected components. 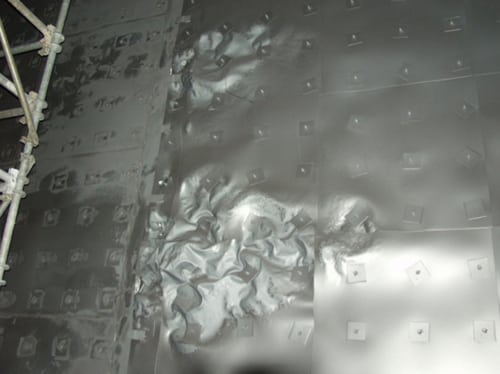 7. This supplemental firing duct liner in a two-shifting plant experienced damage from radiant heat transfer and the use of an inadequate material. Courtesy: Tetra Engineering Group, Inc. 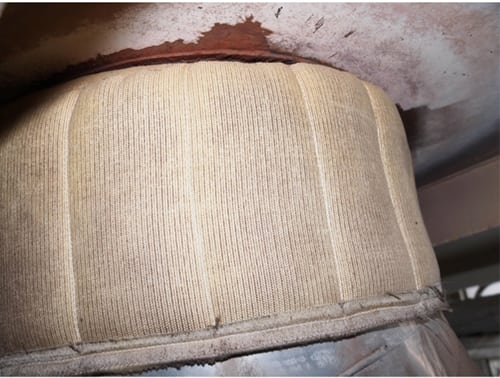 8. The seal below the reheater outlet was damaged and replaced in this two-shifting plant. Courtesy: Tetra Engineering Group, Inc. 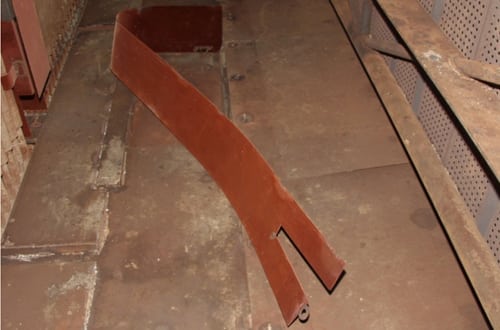 Duct Burners. Duct burners can adversely impact the integrity of downstream tubes if flame impingement occurs. This typically happens when the firing duct is not sufficiently long to accommodate the length of the burner flame. When flame impingement occurs, the end of the flame is actually in the downstream tube panel. In this case, the burners need to be turned down to prevent this damage. Duct firing also has advantages during certain low-load operations where the increased steam flow helps “cool” high-temperature components and mitigate the increases in temperature which might otherwise occur (Figure 10). 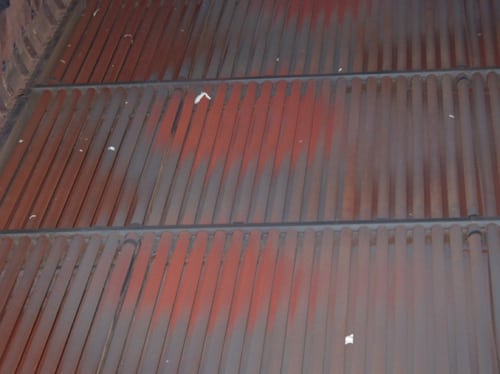 Quench Damage. All HRSG OEMs assume a temperature variation in their panel design calculations, and temporary thermocouples can assess whether the assumed variation is bounded by the OEM’s assumptions. Some plants have also installed thermocouples to determine whether steam binding is occurring in poorly vented HP economizers, although this issue is less common with new design HRSGs. Water hammer caused by poor drainage or a leaking attemperator can cause extensive damage, particularly steam piping (Figure 11). 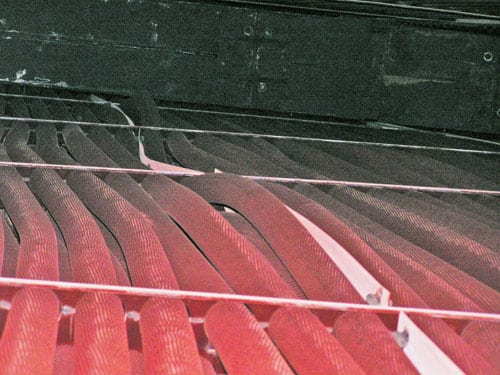 Attemperator sprays continue to be a significant problem for a variety of reasons, such as poor engineering designs of spray line layout and control by manufacturers, premature failure of some spray valve components in the field due to manufacturing/QC causes, and a demand for high spray flow rates in order to control downstream metal temperatures to below design values.

Cold End Corrosion. Cold end corrosion is heightened in many merchant plants because they are operating for more time at part load than anticipated by design. At part load, component surface temperatures (principally the low-pressure economizer or feedwater heater) may operate below the acid dewpoint temperature, which provides the environment in which acids will condense on tube surfaces, causing corrosion damage.

Calculation of the acid dew point based on fuel gas constituents, emissions controls equipment factors, and the specific thermal conditions for low-load operation can assess the expected severity of the problem for a specific HRSG design. This problem is aggravated by greater than anticipated sulfur content in fuel gas in some locations. Older units have employed CO2 blasting to remove some of the deposits, but the effectiveness is limited if the affected section has many (deep) tube rows. Those units with cold end corrosion problems generally have a combination of design and fuel gas quality issues and are often characterized by frequent exposure of susceptible surfaces to high ambient humidity with long periods of layup (Figure 12). 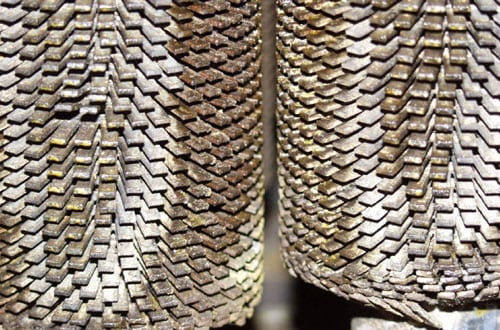 12. Deposits often form on low-pressure economizer or feedwater heater tubes when the metal temperature is less than the dew point temperature of the exhaust gas. On this tube, the sticky deposit has a pH of 3 and will soon cause cold end corrosion of the fins and tubes. Courtesy: Tetra Engineering Group, Inc.