This March, Japan’s Mitsubishi Heavy Industries Ltd. (MHI) quietly completed development of the "J-series" gas turbine — a machine that has been extolled in the turbo-machinery world for its ability to produce one of the world’s largest power generation capacities and highest thermal efficiencies. When commercial production begins in 2011 — as MHI expects — the J-series will be the latest in a new generation of gas turbines, contending for global sales against heavyweights from General Electric, Siemens, and Alstom.

The J-series is already being considered the best in MHI’s fleet (Figure 1). Designed to operate at blistering temperatures of up to 1,600C at the turbine inlet, the 60-hertz J-series turbine achieves a rated power output of about 320 MW (ISO basis) and 460 MW combined-cycle power generation. According to the company, it is able to withstand temperatures 100 degrees higher than the company’s existing 1,500 C-class G-series gas turbine because of a low-thermal-conductivity thermal barrier coating technology and improvements in cooling efficiency. The adoption of an enhanced three-dimensional design contributes to improved aerodynamics. In the J-series gas turbine, moreover, the compressor is designed to provide a higher compression ratio, while the combustor carries on the steam-cooled technology originally developed for the G-series turbine. 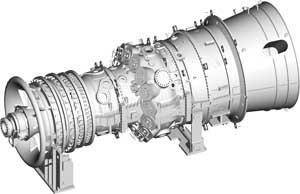 1.    Monster showdown. Mitsubishi Heavy Industries earlier this year completed development of a 320-MW “J-series” gas turbine (shown here) whose thermal efficiency is expected to be “well above” 60%. The J-series is expected to be commercially operational by 2011—around the same time Siemens will have completed both phases of the H-class turbine’s testing program. Courtesy: MHI

But the J-series also adopts new technologies derived from an ongoing Japanese project that seeks to develop core technologies for a 1,700 C-class gas turbine, MHI says. Gas turbine combined-cycle (GTCC) systems featuring the resulting turbine are expected to achieve "well above 60%" power generation thermal efficiency and generate 1.2 times more power than a GTCC using a G-series gas turbine — which, as MHI points out, is the largest gas turbine commercially available.

So how will it compare with mega turbines from Europe and the U.S.? The J-series could go head-to-head with Siemens’ H-class SGT5-8000H, a 340-MW mega turbine and 530-MW combined-cycle power plant whose thermal efficiency "exceeds" 60%, as Siemens claims on its website. But the 50-hertz turbine, based on a combined Siemens and Westinghouse gas design, has the advantage of time: Already installed at the Irsching 4 gas power plant in Bavaria, Germany, the prototype turbine has been fired and synchronized to the grid, with full-load testing starting in April 2008. The validation program will continue until mid-2009. Then, extension of the simple-cycle test plant to a high-efficiency combined-cycle plant begins in phase two of the program, with transfer to the plant operator, E.ON, expected in 2011.

Meanwhile, GE’s advanced combined-cycle system capable of breaking the 60% efficiency barrier — the H System — continues making headway around the world. Following a prototype test, the first 50-hertz system began operating in 2003 at Baglan Bay in South Wales, UK. Last July, the second system began service at Tokyo Electric Power Co.’s (TEPCO) Futtsu-4 plant. TEPCO is in the process of installing a second system at that plant and this January received its third system. Meanwhile, the first two 60-hertz H systems — with a net rated output of 775 MW — are being installed at the Inland Empire Energy Center in Southern California.