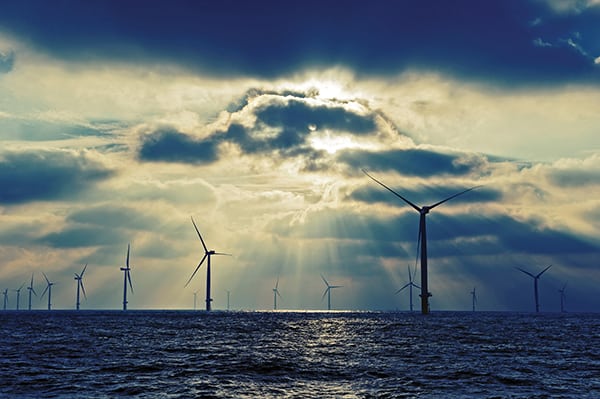 The 175-turbine London Array wind farm was built on schedule, on a scale once thought unfeasible for the emergent offshore wind sector—and despite economic headwinds of the global recession and rough weather and sea conditions. Its success has been vital for the UK, which has anchored its energy future with offshore wind power. Courtesy: London Array Ltd.

In 2001, the year that the world’s largest offshore wind farm was conceived, the outlook for offshore wind was foggy. A paltry 95 MW of capacity had been installed worldwide—mostly in Denmark—and a number of northern European countries were contemplating how to fund proposed installations comprising thousands of megawatts. Only a handful of projects were taking shape outside Europe, including the much-hyped but yet-to-be-built 468-MW Cape Wind project proposed for offshore Massachusetts.

In the UK, negotiations between the British Wind Energy Association (now RenewableUK) and the Crown Estate, landlord of the UK’s coastline extending 12 nautical miles (22.2 kilometers [km]) offshore, had finally resulted in the completion of the country’s first offshore wind farm—a near-shore two-turbine evaluation project in Blyth Harbour in northeast England. The Crown Estate had meanwhile launched the first (of now three) leasing rounds, involving projects of no more than 30 turbines.

Round 2, launched in 2003, would involve larger projects sited in deeper waters farther offshore in the Greater Wash, Greater Thames, and Irish Sea—including the£2 billion ($3 billion) London Array project. Round 3, released later in 2010, would cover projects planned for nine zones across the UK.

As of October 2014, the UK has connected 21 more offshore wind projects. Today, it leads the world with 3,653 MW of offshore capacity produced by 1,075 wind turbines. That’s more than 50% of installed offshore wind capacity in the European Union. The country’s offshore wind farm sizes have also gotten progressively bigger since 2010, when the 300-MW Thanet project came online. In 2012, the 504-MW Greater Gabbard project began operations, and it was followed by the completion in April 2013 of the 630-MW London Array.

From here, the UK’s ambitions only get larger. Plans to meet 25% of its power needs with renewables by 2020 underscore offshore wind’s role, requiring at least 15% of the nation’s energy mix to come from turbines at sea. Consent for three projects that would be larger than the 175-turbine London Array—the 1,200-MW East Anglia project, the 1,000-MW Inch Cape project, and 700-MW Rampion project—was only garnered earlier this year.

The Array’s original developers say the project grew out of environmental feasibility studies commissioned to gauge a vast site’s suitability to accommodate 1 GW or more of turbines. They were also seeking a site about 15 km offshore but with a maximum water depth of 25 meters (m) to avoid prohibitive foundation costs.

The site ultimately selected as the most appropriate for development covered an area of 245 km2, about 20 km off the coast of England’s Kent and Essex counties, where the Thames flows into the North Sea. It provided a number of exclusive advantages, which included an excellent wind regime, minimal interference with navigation channels, and proximity to ports for construction as well as to the UK’s principal electricity load center.

Permitting, however, proved to be the project’s first major impediment. Planning permission to build an onshore substation at Cleve Hill near the village of Graveney on the north Kent coast was rejected by the local planning authority in June 2006 on concerns over construction traffic. An appeal of that decision led to a public inquiry and final approval in August 2007, though the project by then lagged 15 months behind schedule.

Then, in May 2008, just as the last key negotiations over equipment contracts were taking place, Shell—which held an equal partnership with E.ON and DONG Energy—abruptly announced it would withdraw and sell its stake to fund onshore wind investments in the U.S., where it said planning permission was easier to get. Though it drew the wrath of UK politicians and environmentalists for its “irresponsible” decision, Shell also cited costs that it alleged had soared by 45%.

To keep the project afloat, E.ON and DONG Energy bought equal parts of Shell’s share. By October, Masdar—one of the world’s largest cleantech funds—had snapped up a 20% stake in the project, giving the wind farm much-needed financial clout. Still, “At this stage, the partners had yet to decide whether to proceed to construction,” an Array spokesperson recalls.

Then came the 2009 economic crisis and its ensuing credit crunch. As carbon prices collapsed and equipment costs surged, several high-profile renewable projects across the world capsized. Yet, despite dire forecasts that the crisis was poised to engulf the UK’s ambitious renewable energy plans, the country’s budget that year designated£1.4 billion ($2.26 billion) of extra targeted support to energy efficiency and renewables projects, including£525 million ($846 million) to safeguard 3 GW of proposed offshore wind investments over the next two years.

Cheered by the support, the London Array consortium announced the go-ahead for the massive project’s first 630-MW phase. That December, it cemented contracts totaling $2.55 billion for offshore works (Table 1).

Construction was finally launched in July 2009. It was a feat that involved careful planning of installation activities and a steadfast commitment to health and safety by the London Array team and all its contractors. At the peak of construction, 1,000 people were working on the project—including 400 from Siemens Wind Power alone. During construction, partners DONG Energy, E.ON, and Masdar “seconded some of their best people to the project,” the consortium acknowledges. “The success of the project is down to the way the partners have came together in a unique joint venture, combining their expertise and experience.”

The SWT-3.6-120 wind turbines—each taller than the London Eye and with a swept area of 11,300 m2—took one to two days each to install. The 480–metric ton behemoths were installed in six stages, starting with the two tower sections (which are bolted onto the transition piece), followed by the nacelle and hub, and finally, the three 58.5-m blades (one at a time, in a horizontal position).

“Delivering so many components, especially during difficult economic times, placed additional strain on subsuppliers,” recalls Chris Randle, a Siemens senior project manager. Weather-related delays were also inevitable. While the Array’s components—turbine towers and nacelles—were ready to ship from Esbjerg port in Denmark in November, they couldn’t leave port until the following January due to rough weather. Installing the 177 monopiles—each up to 68 m tall, 5.7 m wide, and weighing up to a stunning 680 metric tons—was also made more complex by unpredictable sea conditions and high winds onsite, 20 km from shore.

Technical challenges were posed by the installation and burying of cable in shallow water locations, but this was remedied by a comprehensive suite of solutions, including bespoke modifications to vessels and equipment—lessons learned that could prove invaluable for any industry involved in shallow water construction.

Ultimately, the final 10 months of construction saw installation of three of the four 50-km export cables, three substations (including two offshore weighing 1,250 metric tons each), 90 foundations, all 175 turbines, and 200 km of array cables—allowing the project to be completed on schedule by December 2012. Commissioning all 175 turbines took just six months in total—a noteworthy achievement, considering that most of the commissioning work took place in rough winter seas.

London Array’s titanic turbines today churn out the originally estimated annual output of 2.2 TWh. Last winter (October 2013 to March 2014), the wind farm generated 1.5 TWh, production that was ahead of target. But while this exceptional project has pushed the boundaries of offshore wind project development and construction—and will continue to be one of the world’s largest, at least until the UK’s Round 3 projects are grid-connected—it won’t be expanded.

Phase 2, which would have boosted the project’s capacity to 1 GW, was formally canceled in February 2014 on concerns about its potential impact on area waterfowl.

Given the previously acknowledged constraints, it was expected that Phase 2 would need to be reduced from a planned 370 MW to about 200 MW. And, an assessment in early 2014 showed that it could take until at least 2017 for enough bird monitoring data to be collected—“with no guarantee London Array would be able to satisfy the authorities with regards to the Red Throated Diver population.” Then, there were known technical challenges to overcome at the Phase 2 site: shallow water, longer cable routes, and an exclusion zone for aggregates operations. These environmental uncertainties led shareholders to withdraw from Phase 2 “and concentrate on other projects in their individual portfolios,” the consortium says. ■