Boiler tubing is made of different types of steel. For superheater and reheater sections that operate at higher temperatures, components are manufactured from austenitic stainless steel due to its properties of high creep strength and good corrosion resistance. However, because austenitic stainless steel is expensive, tubing in the earlier boiler stages, where design temperatures are lower, can be made of less-costly ferritic alloys such as Grade 22 steel, which contains chromium and molybdenum, and is commonly known as a Cr-Mo steel. Unfortunately, at some point, the austenitic steel and the ferritic alloy have to be welded together, with the result that, among the thousands of tubing joints in a typical boiler, many are transition joints, where the two metals have to be joined by dissimilar metal welds (DMWs).

Historically, DMWs have proven to be a weak location where premature failures may occur. If not properly fabricated, these welds can result in inferior properties and substantially reduce component life. Careful selection of welding filler material, preheat temperature, and postweld heat treatment temperature are paramount for dissimilar welds to avoid poor reliability.

In the 1980s, research conducted by the Electric Power Research Institute (EPRI) and others indicated that a number of the issues associated with DMW failures are related to the composition of the welds’ filler metal — the metal added in the making of a joint during the welding process (Figure 1). Research also showed that conventional 309 stainless steel filler metal resulted in the shortest life and that nickel-based filler metals resulted in three to four times that life. 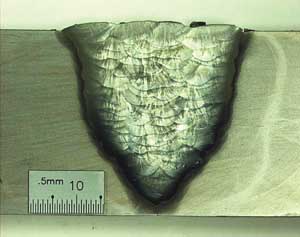 Research further indicated that DMW failures are caused by two key mechanisms. One mechanism is a result of the difference in the rates of thermal expansion among different alloys and filler metals. Thermal expansion of an alloy is the amount that the material expands upon heating and shrinks during cooling, and that property is unique to a given material. When two alloys with different thermal expansion rates are joined, stress develops at the fusion line between the alloys as temperature changes. This differential expansion mismatch can contribute to creep fatigue damage.

Research also showed that premature failures of DMWs are caused by a mechanism called carbon migration. One of the factors that give the Cr-Mo alloys their creep strength is that they form carbides by the combination of carbon and other elements, including chromium. When two materials with different levels of chromium are joined together, the carbon migrates during elevated temperature service from the lower-chromium-containing alloy to the higher-chromium alloy. As the temperature rises, the rate of carbon migration increases. This migration results in an area of depleted carbon, called a "carbon-denuded zone," in the lower-alloyed material and results in lower creep strength due to there being less carbon available to form carbides (Figure 2). 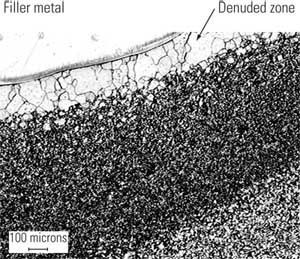 2.    Carbon migration. In dissimilar metal welds using conventional filler metals, carbon can migrate, under increased temperature, from the low-alloy base metal to the high-alloy filler metal, creating a weak, carbon-denuded zone in the base metal next to the fusion line. Courtesy: EPRI

In the 1990s, based on this research, EPRI developed a new filler metal, called HFS6, that was intended to solve these problems. The high nickel content of the filler metal resulted in thermal expansion similar to that of low-alloy ferritic tube materials. HFS6 also contained a low chromium content that would result in a smaller carbon-denuded zone than was possible with available nickel-based and austenitic fillers, thereby eliminating carbon migration. HFS6 was never commercialized, however, because of its tendency to develop microscopic cracks, called microfissures, which resulted in lower service life.

A New Filler Metal for Grade 91 and 92 Joints

Over the past 10 years, the need for a new filler metal for DMWs has become even more pressing as new plants have been designed for higher efficiency and as advanced alloys, such as the higher-strength ferritic/martensitic Grade 91 and 92 alloys, have been developed for higher temperature/pressure operation. (See "Why new U.S. supercritical units should consider T/P92 piping" in POWER, April 2006.) Grade 91 is specially modified and heat-treated steel with 9% chromium, 1% molybdenum, and is vanadium enhanced. Grade 92 is similar to Grade 91, except that some of the molybdenum has been replaced with tungsten, resulting in even higher creep strength. These alloys have been the materials of choice for piping, tubing, and header retrofits and new installations for many cogeneration activities. They offer several advantages over conventional Cr-Mo steels in that they are often less expensive to install because their higher strength allows for lower material tonnage and fewer overall welding requirements due to the thinner cross sections required.

With the increasing use of Grade 91/92 steel, EPRI took another look at HFS6 to see if it could be reconstituted to avoid microfissuring and provide a new filler metal for weld joints between Grade 91/92 pipes and tubes and low-alloy ferritic or austenitic pipes and tubes.

Modifications to the baseline alloy composition eventually yielded an alloy that is virtually microfissure-free in the area where the weld is deposited. Like its predecessor, HFS6, the new filler metal, named EPRI P87 (P87), avoids the damage mechanisms that lead to failures in conventional filler metals. The thermal expansion of P87 is closer to that of low-alloy ferritic base metals, such as Grades 22, 91, and 92, than to traditional Inconel 625 and 309 stainless steel filler metals. This means that, as tubing is heated and expands, there is less difference in expansion between the filler metal and the base metal on the ferritic side of the joint, and therefore less stress on the welds. Because it contains less chromium, P87 also eliminates carbide formation and carbon migration, which have historically been shown to be detrimental in traditional DMWs.

In addition, P87 offers several advantages related to how the welding process is done. Welding requires post-weld heat treatment (PWHT), which is a standard tempering procedure of applying heat following the welding process in order to toughen the weld metal and the base metal affected by the welding. Current construction codes require PWHT at different temperatures for the hardenable ferritic materials, Grade 22 and Grade 91/92 steels. However, when two different steels are joined, the PWHT must be performed using the higher temperature of the two materials. If the lower-alloyed materials are heated to too high a temperature, it can weaken the base metal affected by the welding, and failures can occur.

Many studies have also shown that, at low stress levels (where piping and tubing normally operate), Grade 91 and 92 weldments will fail in the so-called Type IV location, which is an area of the base metal affected by the heat of welding. Research conducted by EPRI shows that P87 can be used, prior to making the final joint, to "butter the base metals," or to add metal to the end of the tube or pipe and thereby provide a protective buffer, allowing separate PWHT of each alloy at the optimum temperature. Once this step is performed, the final weld may then be made without PWHT.

The EPRI filler metal also allows this separate PWHT to be done at the factory, on many components at a time, rather than at the plant site, joint by joint. This capability can avoid the need for additional bracing that may be required during field PWHT to prevent distorting piping and can significantly reduce the time allotted for PWHT, thereby shortening the construction schedule.

Metrode Products Ltd., an English manufacturer of welding consumables, has commercialized EPRI P87 (Figure 3). Although P87 can be used in retrofit applications, one of Metrode’s first sales of the filler metal was for a new plant application. The company sold about 1,500 pounds of the filler metal in shielded metal arc welding form to Babcock and Wilcox (B&W) for construction of Unit 1 of American Electric Power’s (AEP’s) John W. Turk, Jr. Power Plant, a 600-MW baseload plant near Texarkana, Arkansas, and the first ultrasupercritical (USC) pulverized coal plant in the U.S. (See page 34 for an artist’s depiction of the completed plant and a detailed description of Turk’s steam turbine design.) 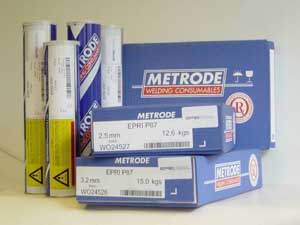 B&W was contracted for the engineering, design, supply, and installation of a 600-MW net pulverized coal – fired spiral-wound universal pressure boiler. USC plants are designed to operate with overall plant heat-to-electricity conversion efficiencies that are higher than those of supercritical plants. To achieve these efficiencies, USC plants operate at higher temperatures; in the case of the Turk Plant, the design calls for a main steam condition temperature of 1,110F at 3,675 psig and a reheat steam condition temperature of 1,125F at 775 psi.

These higher temperatures pose challenges for the DMWs in the tubes of a USC boiler. For this application, the P87 filler metal was used because it allows the design to increase the temperature use limits for the DMWs between the Grade 91 and 92 alloys and the austenitic stainless steels above the boiler roof line. With the P87 filler metal, the operating temperature of the DMWs can be increased, while the inherent joint stresses can be maintained at values similar to those of the traditional Inco Weld A/182 DMWs used at lower operating temperatures.

Fabrication of the boiler pressure parts for the Turk plant has been completed, and the parts are being delivered to the plant site for erection. The plant is under construction, and major foundations are being installed. Figure 4 shows sample welds using P87. These DMWs also used the EPRI modified 60-degree weld prep angle, on the Grade 91 side of the joint. 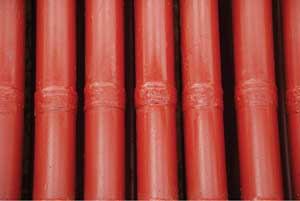 The P87 filler metal used for the Turk plant was supplied as shielded metal arc electrodes. Work is ongoing between EPRI and B&W on the development of a solid wire form of P87; a prototype has been tested in trial welds, but the material has not been commercialized. A solid wire P87 would allow the filler metal to be used in gas metal arc welding (also called metal inert gas welding) and gas tungsten arc welding (also called tungsten inert gas welding). Use in these other welding processes would increase applications of the filler metal.