The crown for the world’s most powerful operating wind turbine was transferred this January to Danish wind turbine maker Vestas, as its first 8-MW prototype began generating power at the Danish National Test Center for Large Wind Turbines in Østerild.

Compared to the first 450-kW offshore wind turbine that was installed in 1991 at Vindeby, Vestas’ massive V164-8.0 MW, which features a 140-meter (m) tower and a tip height of 220 m (Figure 3), is characteristic of a trend in the world’s troubled offshore wind sector: cutting offshore kilowatt-hour and installation costs by increasing unit capacity. Vestas, which foresees serial production of the V164-8.0 MW turbine by 2015, expects the prototype to be closely monitored to validate its reliability and energy output. 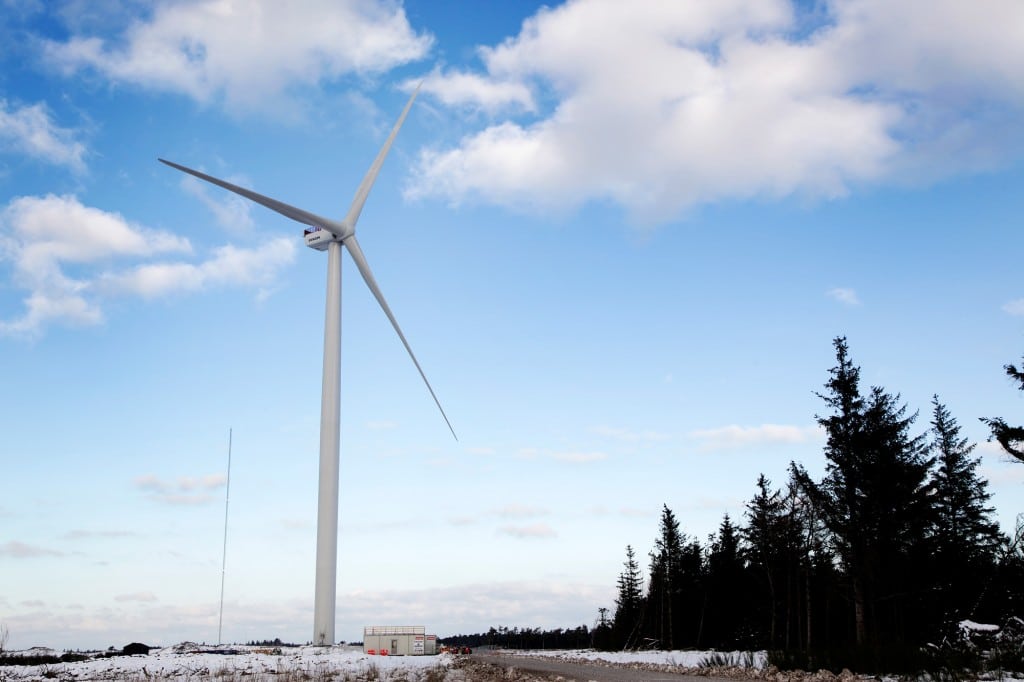 3.              Scaling for economy. The massive V164-8.0 MW offshore wind turbine will be the flagship product for the offshore joint venture between Denmark’s Vestas and Japan’s Mitsubishi Heavy Industries. Vestas says a prototype installed in Østerild, Denmark, this January will be monitored and serial production of the massive turbine could begin by 2015. Courtesy: Vestas

The offshore wind sector has fared the worst out of a global wind market that saw a significant drop in installations—about 10 GW in 2013—for the first time since wind turbines entered the industrial era. Analysts peg the slowed growth to a lack of continuity and, in some cases, reversal of government incentives both in the U.S., where a key federal tax incentive expired this year, and in the European Union, where renewables support mechanisms—some in place for more than 15 years—are being reformed.

In 2013, almost 1.5 MW out of every 10 MW of capacity was installed offshore, mostly in Europe, where major installations were completed in the UK (London Array, Lincs, Gunfleet Sands 3, and Teeside); in Denmark, with connection of the Anholt farm; and particularly in Germany, which practically doubled its offshore fleet via the Bard 1. But according to the European Wind Energy Association (EWEA), the number of offshore projects under construction is dropping. The industry group notes that several projects have been abandoned, such as RWE’s Atlantic Array, dropped for technical and economical constraints, and the London Array consortium’s recent cancellation of the massive 630-MW project’s second 320-MW phase because of environmental uncertainties (see item in POWER Digest below). In a stunning admission, meanwhile, EWEA says that the European target of 40 GW for 2020 is no longer feasible, and that 27 GW is much more realistic.

The reason, analysts say, is that along with policy uncertainties, the wind sector is also generally seeing industry restructuring in much tighter market conditions. The offshore sector is especially exposed owing to its high production costs. Last year, for example, saw German manufacturer Bard file for insolvency in November, sunk by runaway costs of constructing the Bard 1 farm.

While wind turbine makers like Vestas seek to increase turbine capacities, they are also forming alliances with competitors and merging offshore divisions. Vestas and Mitsubishi Heavy Industries (MHI) will officially create an offshore joint venture in March 2014 to combine their technical expertise and financial power. The joint venture will boost development for both Vesta’s 8-MW turbine and MHI’s 7-MW SeaAngel prototype, which is scheduled to be installed at the Hunterson Center in the UK later this year.

This January, Spain’s Gamesa and France’s AREVA also confirmed they were discussing setting up a 50:50 subsidiary make a commercial push for AREVA’s 5-MW M5000 turbines, as well as AREVA’s 8-MW prototype that is planned to be installed in 2015, with serial production beginning in 2018. Gamesa is also developing a 7-MW to 8-MW machine whose prototype is due in 2017.

Offshore segment leader Siemens has not disclosed any alliances, but it has said it intends to reduce the levelized cost of energy for offshore wind power by 40% by the end of the decade by improving turbine output, making lighter components, and bettering manufacturing and installation processes.